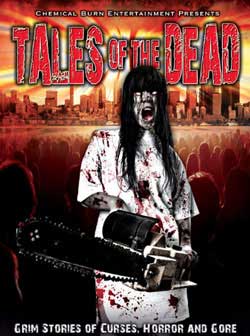 Five friends gather on Halloween to continue their ritual of telling horror stories. Each one telling a more sinister than the next, unaware of the horror that awaits them on this all Hallows eve.
“Less is More”: May has a constant desire to be an amputee. She struggles to cope until a doctor makes her an offer she can’t refuse.
“Wolf Cry”: Zack is obsessed with horror movies until one night when he experiences something that changes his world forever.
“Penance”: The city is in the grip of a sadistic serial killer. Detective Klein’s career is in tatters until he is chosen by the killer to play a horrifying game.
“Missing” Five friends investigating an ancient curse discover far more than they bargained for when they unknowingly unleash a dark force.

Tales of the Dead is a low budget anthology containing 4 stories within a wraparound segment. It’s Halloween and a group of friends get together to smoke pot and show each other their latest short films. The biggest problem I had with this is that they were hard to hear on top of having some thick accents. So the interaction conversation was mostly ignored waiting for the shorts to play. As follows, the first sort is about a woman who is obsessed with being an amputee. In other words, she really wants her arms and legs sawed off. I’m guessing this is a disorder of some kind, though not sure it was a real one. In any case, lets just say….be careful what you wish for. This segment is the best of the 4 which goes rapidly downhill from here on in.

A young boy, Zack dreams of making horror films. So much that he can’t really focus on life long enough to get his act together and do something with himself. His mother is stressed, hardworking and needs his help, but at the age of 19, Zack can’t even focus long enough to express to the job counselor what it is he wants to do besides daydream. As we can guess from this point, Zack also gets a bit of reality check when fiction becomes reality for him.

“Penance” is probably the stupidest of the 4 as it actually has a premise and then just ends on complete nothingness. A detective who is obsessed with bondage is hot on the trail of …well a bondage style killer. While he has his own problems to deal with, he is getting close to the answers he needs….then, um the segment ends. Ok, you owe me one, I just saved you the time of watching this 3rd segment, fast forward.

The 4th “Missing”, put me to sleep and at the same time also lacked any kind of substance.

The shorts within could have had some entertainment value, though each one feels like there was no ending. Meaning that ….a premise is established and then just stops. I’m not sure why the director took such unappealing approach but it’s not the way to win an audiences. With a group who is hard to understand, and then a bunch of sorts with no ending…really where is the level of engagement?

Well, there ya go. I probably would of had more to review but as you can tell the edition was laced with issues all of which are not the kind you want following you around as a film maker. “Tales from the Dead” is a let down and would be better served just looking at the cover artwork which is better than the whole production. My advice is…. watch “Less is more” and then move onto something else. (another DVD)