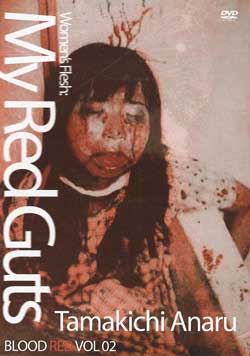 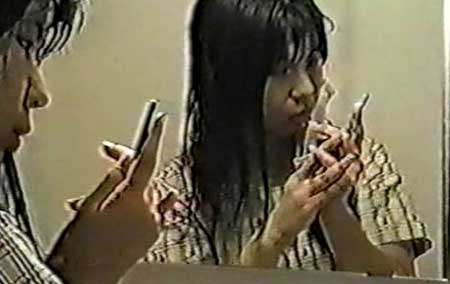 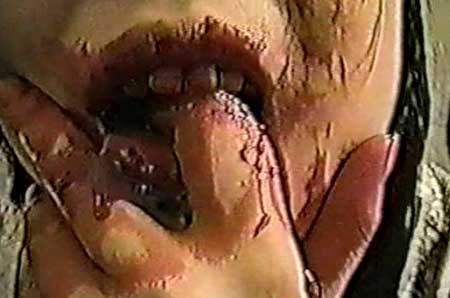 Tamakichi’s next movie, also shot on video, dispenses with even a rudimentary plot; Women’s Flesh: My Red Guts consists of 42 minutes of two women (played by the same actress) torturing and eating themselves to death. That’s pretty much it. What’s more, there is almost no dialogue, restricted to only a couple of very brief flashbacks of the moment when the girl’s boyfriend dumped her. Other than that, the only vocal sounds occur when she pleasures herself with a toothbrush in her snatch – proving that hygiene is also a pressing concern for vagina dentata.

The second woman (who may or may not be an alternate persona of the first) makes no noise at all, even as she slices into her abdomen and plays with her own innards. The sound design during this second part of the film is a mess of bizarre electronic sounds (coming off like a cross between a purring cat and a malfunctioning Atari 2600), dipping into bursts of white noise. There are constant shifts in color grading and image processing too, cycling through a variety of grainy, low-resolution video formats. 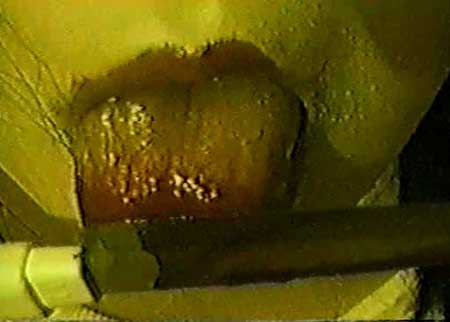 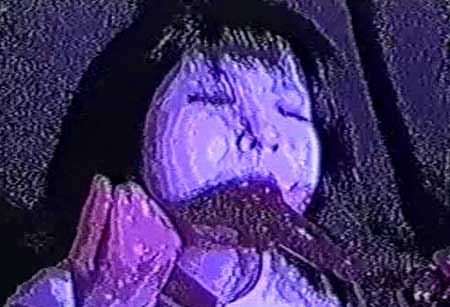 Uncharacteristically, there is no nudity in the film. Even the toothbrush penetration is performed both with panties on and under the cover of an oval of pixelation (which tells you what part of Asia you’re in, if you didn’t already know). In stark contrast, the gore is plentiful and disgustingly over-the-top. After the initial blood-drenched crotch-stabbing, the protagonist chews off a finger. Her alter ego stabs herself repeatedly with a fork, licks the blood off, slits a wrist, opens up her belly, removes her entrails before feasting on them, cuts off her tongue, and then thrusts the knife into her forehead. True to form, Tamakichi’s camera gets off on every detail, lingering on each of these acts, as well as on the motionless bodies after all the carnage, zooming in on a bloodied crotch as if possessed by the spirit of Jess Franco.

Is there any point to all this surreal and nauseating bloodletting? The only attempt at contextualizing the mayhem comes in the form of the black and white flashbacks of the girl’s final meeting with her boyfriend. He calmly tells her he’s sick of the life he has with her and wants to break up, giving back her key before disappearing. In a state of shock, she loses her shit and starts to trash the apartment – at which point we see her enter the bathroom (i.e. the beginning of the movie), the film transitions to color, and we know what prompted her to end it all.

The horrific scenes of self-mutilation recall similar moments in Hisayasu Sato’s far more accomplished Splatter: Naked Blood (1996). But unlike Sato’s perversely exhilarating roller coaster ride, Women’s Flesh: My Red Guts eschews more traditional methods in favor of a commitment to experimentation laced with unfiltered savagery. Perhaps there is one obvious lesson we can take from the film: if you spend the night with a Japanese woman who has just broken up with her boyfriend, don’t even think about borrowing her toothbrush.