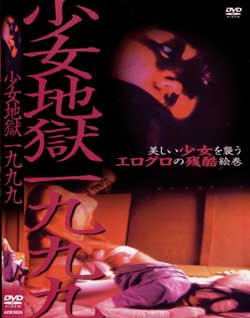 Misaki, a kindhearted 17-year-old schoolgirl, leads a lonely and miserable life. Abandoned by her mother, she lives with her invalid sister and abusive father. Unable to defend herself, her sister is sexually abused by their father constantly, but Misaki herself manages to avoid his incestuous attentions. She is unable to relate to her only friend, a fellow student who prostitutes herself daily, but she often brings food to a deranged homeless woman, who believes that the large doll in her arms is actually her child. Two sadistic young men working nearby take an interest in Misaki, and one of them tries to befriend her. When he feels he has been rebuffed, however, the men give in to their savage impulses and go on a murderous rampage. As Misaki witnesses and becomes victim to more and more horror and degradation, she finally begins to succumb to her own violent urges.

When a film opens with two young guys having a philosophical discussion about their diminishing interest in sexual assault, and the relative advantages of raping the elderly, you know it won’t be coming soon to a theater near you. If you’ve been exposed to the work of writer/director Daisuke Yamanouchi before, however, you’ve probably already unplugged your morality meter and are ready to pop another small-screen downer from this audacious Japanese taboo trampler.

Girl Hell 1999 was released in the same year as Yamanouchi’s Red Room and Muzan-E. The running time of each of these shot-on-video movies clocks in at little more than an hour, although Girl Hell doesn’t end as conclusively as the others, favoring ambiguity over suspense and narrative twists. Despite the endless stream of nauseating imagery in Muzan-E, for example, the ending is darkly satisfying and alleviates the bad taste left in the mouth, whereas Girl Hell is downbeat to a fault, culminating in an angry, ugly finish. 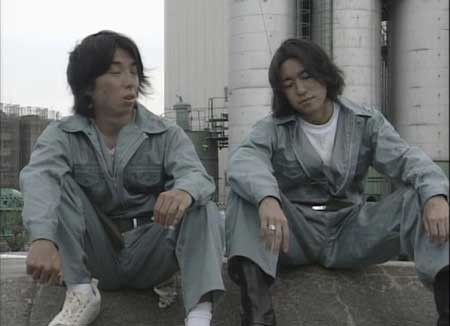 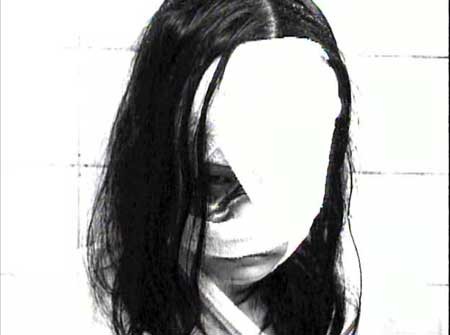 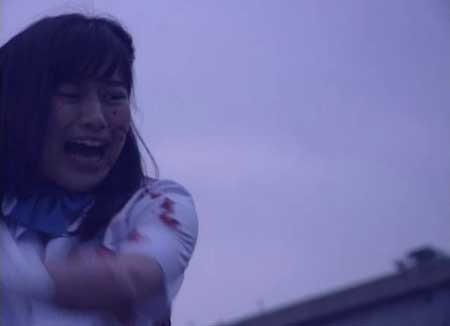 The final act of violence is unrealistic and actually rather silly, but the humor that can be found in the film is usually so dark it squeezes off the laughs before they can offer much relief. A couple of really funny moments mirror the kind of bizarre vulgarity of Yamanouchi’s Kyoko vs. Yuki (2000), and involve actors who also appeared in that film. One scene shows an older dude getting his rocks off with Misaki’s plump friend; his loud, sweaty ecstasy is countered by the girl’s sheer boredom. When he pleads for the tissues she uses to mop up after the deed, she sees another business opportunity and charges him royally for the sodden souvenir. In another scene, an ordinary-looking guy posing as an education official turns out to be a degenerate stalker, tying up Misaki and feeding a tube into her nether region in order to, shall we say, quench his thirst.

It probably doesn’t need to be said that all the men in this world are thoroughly depraved and predatory. The young men at the beginning of the film talk about rape as if it were a career path, and when they later run riot with little provocation most of the small cast is either bashed with a baseball bat, stabbed with a screwdriver, or run through with a pork sword. Misaki’s father (played by pink film actor and filmmaker Kazuhiro Sano) is no improvement, as he uses his severely impaired daughter, who cannot move due to injuries sustained in a traffic accident, as a twenty-four hour sex slave. 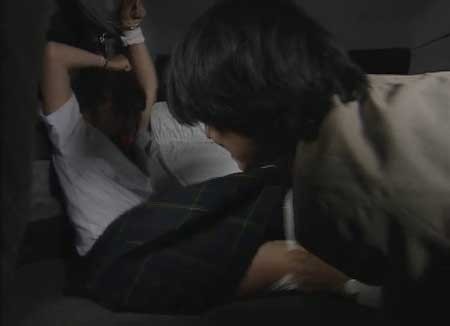 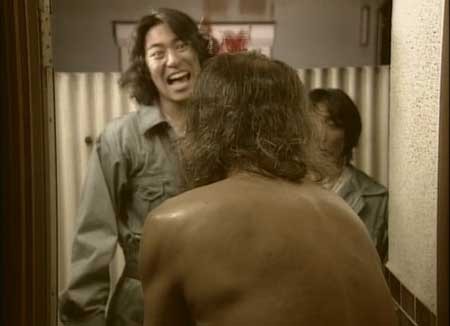 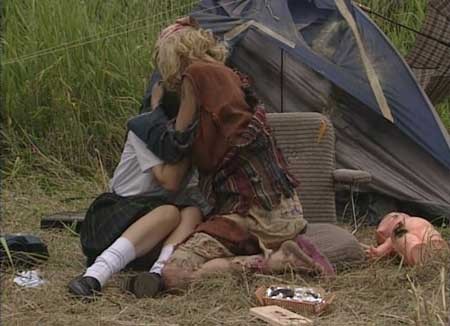 The women in the film are far from ideal role models themselves. Misaki’s friend is so adept at the oldest profession, you wonder when she finds time to study. The homeless woman that Misaki often visits is batshit crazy, constantly nursing a doll she thinks is her daughter – to the point of breastfeeding it. Misaki herself sucks at the teat at one point, as the fragmented identities of motherless child and bereaved parent merge, if only for a moment, into a perverted but mutually comforting union. 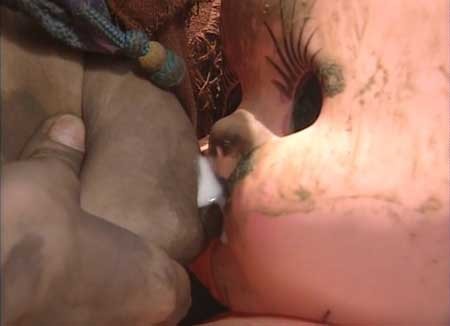 Yamanouchi allows no way out from the cycles of abandonment and abuse. While it can take a lot of effort to try and better oneself, or simply do the right thing, all it takes is the slightest push to create an avalanche in the opposite direction. Misaki (Yoko Satomi) is an almost angelic figure in the midst of all this debauchery and evil, but that makes it even harder to witness the effect of the endless brutality on her. If you prefer films with a deluge rather than a streak of pessimism, hell awaits. And if you just like to see how twisted and shameless the dark knights of Japanese exploitation can get, Girl Hell 1999 and Takashi Miike’s notorious Visitor Q (2001) would make a fitting double, with their self-devouring families, underage whoring, and spontaneously lactating women.