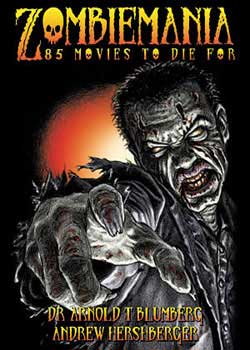 ZOMBIEMANIA (80 MOVIES TO DIE FOR)

Easily one of the largest book of Zombies I’ve run across, one thing is clear…. these authors love there work! With the book totaling over 400 pages Zombiemania is the bible de force for zombie enthusiasts. Authors Dr Arnold T Blumberg and Andrew Hershberger have done what many of us wish someone had along time ago. That is to create a book featuring every zombie film they could find and feature more extensively 80 of the “top” zombie films. As noted in the preface, with zombie films totaling over 550 the undertaking was massive. Then of course there is the issue of separating types of zombies from non zombies. As its noted it is easy to just clump all the creatures of the undead into a zombie category but by modern definition the classification is a little more clear cut. After an exhaustive effort of separating the beasts from the dead they have come up with a book that is as close as you gonna get it in the horror genre specifics on zombie-dom.

With being published in 2006, it still is pretty up to date with the newer films as well. We have recent classics such as “28 days Later” and” Land of the Dead” given there just coverage. And yes before you get into the debate, they do make the distinction of things like “28 days Later” being infected humans, Jason (Friday the 13th) being a human still but later resurrected from the dead and “The Fog” zombies having corporeal abilities.This is just a taste of the many tips and insight put forth in there studies. More incredible is the fact they they have been able to put so many hours into the viewing of this vast zombie collection. The book is easy to read, doesnt get lost in overly analytic descriptions and really gives you a nice base of info on the movies.

The feature articles are very entertaining. Out of the 80 films they’ve picked, they’ve dedicated the more extensive coverage to the more important films of the bunch. Sure you get the obligary reviews of the films but it doesn’t stop there. They go deeper with listing analogies , tag lines, Director notes, actor lineages, DVD notes, follow up information and my favorite section “Now Wait a minute”. This section points out plot flaws, mistakes and movie flubs that they caught in there viewing’s. Pretty interesting stuff to say the least. We also get the benefit of alternate titles throughout the book, which with a film like Fulci’s Zombie there can be quite a bit of title variations. Add to that tag lines that the films used in there promotions and you’ve got a pretty full package. Other stuff like behind the scenes and DV notes helps to clarify what happened to the film and how it was released in diff countries. Some of the releases varying a great deal in censorship and editing changes. “Army of the Dead” a perfect case in point. We get a full listing of the actors, release dates and foreign titles used.

80 not enough for ya? Good news, they’ve set up the end section to list all the zombie films they could find through history back to the 30’s. In fact, even the questionable zombie class films are mentioned. This section is filled with the poste/video/DVD art pieces to help in recognizing former titles. Also strangely enough we have films that most wouldn’t even think were zombie films. Though what they point out is the portions of the film that have zombie appearances (Ex: Lord of the Rings, Phantasm…etc)

Overall this is a great read and great gift for your consummate horror fan. You’ll learn new things, read about great films (and crappy ones), make discoveries, find recommendations on films you maybe have missed and really get to the heart of this specific horror genre class. Even if you don’t read it all in one sitting, its an indispensable reference book as well. With its huge chock filled book size, its a recommended addition to any horror film enthusiasts libraries. Lastly, if the book isn’t enough for you all then Arnold T Blumberg also runs the website www.zombiemania.com From what I can tell they stay pretty on top of the zombie goings on. Film makers might better benefit from these resources for a deeper insight into proper zombie movie making. I know I would. My guess is in a few years this edition will grow with updated releases as well. Fantastic!!!

Published by Telos Publishing, I have noticed a nice focus from that group on releasing great horror film driven books. I also suggest you drop by their site, as there’s a few other new ones that deserve prooper attention.

Now my next wish is for someone to do the same with the Hellraiser franchise. (Hint to authors)