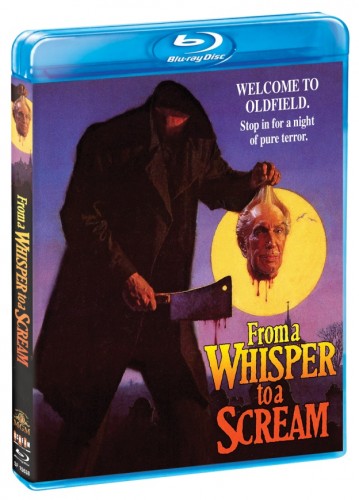 Welcome to Oldfield. Stop in for a night of pure terror. Prepare to be shocked out of your skin with four grisly tales of terror in one small town! On April 28, 2015, From a Whisper to a Scream (also known as The Offspring) makes its Blu-ray debut, courtesy of Scream Factory. This release comes complete with an array of new bonus features, including two audio commentaries and the feature-length documentary Return to Oldfield: The Making of WHISPER TO A SCREAM.

In his last role in a horror film, legendary king of horror Vincent Price gives “his fullest, most sepulchral tones of macabre camp” (Los Angeles Times) to this gruesome anthology that will haunt you for days!

On the night his niece is executed for committing a string of brutal killings, historian Julian White (Price) reveals the sinister secrets of her hometown, Oldfield, Tennessee, a horrific hamlet that spawns evil! But as the town’s murderous legacy is exposed with White’s chilling accounts – including stories of a necrophilic madman, a voodoo priest with life-prolonging powers and a legion of children with an appetite for flesh – White doesn’t realize that he is about the write the final chapter of Oldfield’s morbid history…in his own blood!

Tags From a Whisper to A Scream