It’s time for the newest Horrornews.net giveaway. For a chance to win a blu-ray copy of FEAR CLINIC, just email me at joyhorror@horrornews.net and put “FEAR CLINIC” in the subject line, then in the body of the email – we need your full name and complete address. Winners will be chosen at random. United States ONLY 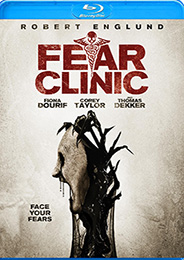 With blood-chilling special effects by award-winning FX creators Robert Kurtzman and Steve Johnson, FEAR CLINIC will take viewers on an unforgettable journey into the very soul of terror itself.

Co-written by Hall and Aaron Drane, the film is based on the critically acclaimed and fan favorite 2009 FEARnet.com series.

When trauma-induced phobias begin to re-emerge in five survivors a year after their horrifying tragedy, they return to the “Fear Clinic,” hoping to find the answers they need to get cured.