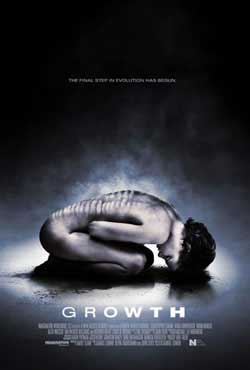 Jamie has just discovered that she has inherited some land from her late uncle. Unfortunately the guy wasn’t the most stable person in the world and twenty years ago he had conducted a bizarre experiment ago involving parasitic creatures in order to better humankind. The experiment goes horribly wrong (of course) and many people are killed as a result. Jamie and some friends go to check out the island she inherited unaware of the fact that the parasites are still slithering about looking for warm bodies to call home. Her stepbrother is soon infected by one of the creatures and slowly becomes a crazed killer with superhuman-like abilities. Will Jamie and the others be able to make it off of the island alive or will they just become hosts for the vicious parasites?

In general I’m just not a fan of the “science gone wrong” movies. I’ve seen my share of them, and I can count on one hand the ones that left a lasting impression on me. With that being said I went into “Growth” with less than stellar expectations. While it didn’t quite knock my socks off I’ll admit that I didn’t think that it was horrible either. Basically I thought it was just a good way to kill 90 minutes but I really wouldn’t go out of my way to watch it again.

There is nothing original about the plot and a few minutes into it I was quickly reminded of a slew of other movies that were very similar (such as “Night of the Creeps,” “Shivers,” and “Slither” just to name a few). Writer/director Gabriel Cowan fails to bring anything new to the table and there is nothing in “Growth” that I haven’t already seen done a million times before. Have you ever watched one of the movies that they show on the SyFy Channel on Saturday nights? You know the ones I’m talking about.

The ones where an experiment that is supposed to do something positive for the human race gets out of control and as a result some sort of animal, alien, etc, goes around killing everyone? That is basically what happens in this film, but the filmmakers just replaced the animal, alien, etc with parasitic creatures. To be honest I wouldn’t be too surprised to see “Growth” show up on the SyFy Channel sometime in the near future.

There was a huge plot hole in the movie that bugged the piss out of me that I feel that I need to mention. It is established early on that the parasites can be destroyed by salt. There are a couple of scenes where an infected person jumps into the ocean so that the salt water will kill the parasite (and causes the person to melt into a puddle of goo as well, unfortunately).

There are also several instances where salt is used to keep the parasites at bay as well. The filmmakers go out of their way to make sure that the viewer knows that salt is bad for the parasites but they forgot one little thing that is actually quite important: there is salt in the human body. If the parasites are so sensitive to salt that just a little bit hurts them how could they survive inside of someone? I know I am being nitpicky here and I hate it when other people pick the smallest things about a movie to bitch about but I couldn’t help it this time. It bothered me and I just felt like I had to bring it up, so forgive me, OK?

On the other hand, there are some positive things about “Growth”. The acting was top notch and it had a very likable cast of characters. Mircea Monroe shines in the role of Jamie, who is a realistic and well-rounded character. Brian Krause (who is looking rather haggard these days) does an adequate job as Jamie’s boyfriend, Marco. 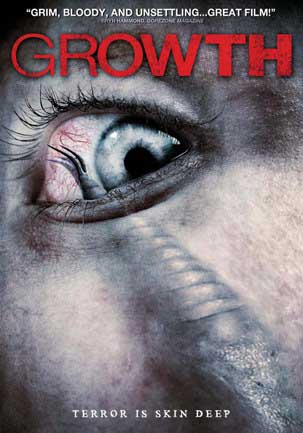 Ian Patrick Williams does a pretty decent job as the obsessed and mentally unbalanced scientist determined to make his experiment a success, and Richard Riehle is great as usual in the role of Larkin. Nora Kirkpatrick does a good job playing the part of Kristen (plus she’s easy on the eyes), and Christopher Shand, who plays Justin, Jamie’s stepbrother is equally impressive (especially after he’s infected and starts killing people). “Growth” has its share of problems but the cast isn’t one of them.

I think the thing that I liked the most about “Growth” was that it had such a down ending. I don’t want to spoil anything here but if you are expecting a happy ending where everyone survives and lives happily every after you may want to go watch something else. The ending is depressing and I applaud the filmmakers for going this route. There is no unrealistic, happy Hollywood ending to be found here and I couldn’t have been happier.

Just because I really wasn’t into “Growth” doesn’t mean it isn’t a good movie. I’m certain that some people who enjoy these types of movies will like it just fine. As I have said before I am more into slasher flicks and movies like this one just don’t appeal to me. If these kinds of movies are your cup of tea I would recommend that you check it out. As for me, movies that feature a masked maniac going around and cutting people in half with a machete is more my speed.