It is back once again, The ABCs of Death 2, 26 directors in one film each tackling one letter in the alphabet creating an entertaining, challenging or humorous short about…death. The film delivers everything that can be imagined and then some sometimes with shocking, horrifying results. Will The ABCs of Death 2 surpass the original or begin a downward spiral?

Dave shares the horror news of the week with news about Universal Monsters and Jurassic World. Between the two monster bits is news of Raimi and Alvarez returning for A Man in the Dark and announcements about Scream and Jack the Ripper on TV.

The HNR grue-crew step in to recap and review each of the 26 episode found in The ABCs of Death 2 diving into what they loved, hated, enjoyed and despised. The second whirlwind trip through the alphabet of death comes across far more cohesive and success than the first outing with a few strong winners and fewer losers. Aharon Keshales and Navot Papushado (F is for Falling) ,Larry Fessenden (N is for Nexus) , Jen and Sylvia Soska (T is for Torture P**n) ,Steven Kostanski (W is for Wish) and Chris Nash (Z is for Zygote) are only a few of the directors involved with this fascinating experiment in horror cinema.

Dave returns to bring you the Horror News of the Week with news of Universal executives announcing that their upcoming Universal Monster revival films will be leaving the horror behind. Boos and hisses ensue. Sam Raimi and Fede Alvarez reunite to develop and release A Man in the Dark. Jack the Ripper is coming to TV with the small screen adaptation of From Hell. MTV’s Scream series continues to struggle with how they will bring Ghostface to the music channel. Jurassic World begins its marketing campaign with the launch of a site describing the background for the 2015 film. 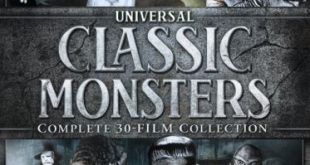