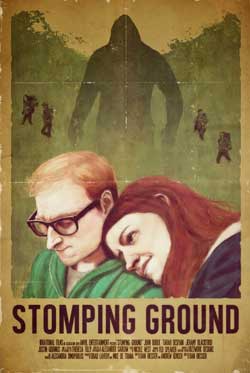 Ben & Annie are a young couple on a weekend trip to Annie’s small North Carolina hometown who, after meeting a charming old friend, embark on an impromptu ‘Bigfoot hunt’ that threatens both their relationship and their lives.

Stomping Ground is a 2014 Independent Horror Comedy about a hipster and his southern girlfriend going to her hometown for the holidays when her friends suggest camping in the woods until they eventually find bigfoot just to find out he likes killing men and kidnapping women.

The film is a long winded couples retreat film where the two main characters, the tight intellectual type Ben played by John Bobek and giggly and rough around the edges Annie. The whole of the film is meant to set up an atmosphere in which Ben doesn’t really know Annie as one by one friends come through the scenes to make Ben uneasy and confused about Annie’s friends and his ability make Annie happy, which we all know is hilarious except when it just makes you hate characters you should have to hate.

From after they meet Annie’s mother they lead into meeting friends at the local bar, starting with Paul played by Jeramy Blackford who clearly exists to emasculate Ben and start the plot by explaining how as kids Annie, Paul and friends would go out into the woods and hunt bigfoot for kicks.

The whole conversation plays out as a pattern of Paul complimenting Annie, Ben making a veiled jealous retort, Annie diffusing the tension and then plot about bigfoot while Ben condescends about how the thought of a real bigfoot is stupid.

Things move to a house party where Annie is ogled and dances with Paul while Ben gets more jealous and the rest of the cast is introduced; Jed, played by Justin Giddings, is the resident expert on hunting bigfoot and sets it up so the next day the three others along with the two bit characters Stan and Marcy, played by Michael Lee Kimel and Sarah Simmons Turner respectively, hike out several miles into nowhere to drink, make attempts at attracting bigfoot and have more aggressive dialogue between Ben and Paul. 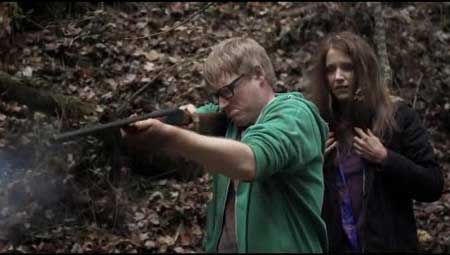 Everything from the morning the camping trip starts until the end plays as a character study between Annie, Ben, Jed and Paul as they bond and get pitted against each other in various ways. At first they start ragging on Ben for being a city boy, then Ben notices Paul is getting closer to Annie than any boyfriend would care for. Ben and Jed bond when joking but Ben is a condescending ass about the bigfoot hobby because of his approach to the idea of bigfoot.

Between all of this Annie is trying to bond with friends so the dynamic becomes this hot mess of characters acting in some contrasting ways that make little sense. Ben is supposed to be reasonable but is quick to anger regardless and even before knowing Paul Ben takes a tone against him. Jed manages to let things roll but is clearly bothered by Ben’s nature so all of Jed’s jokes about himself would be insulting regardless.

Annie sees each character being crude and childish so she stands to unify them regardless of how the characters act up to the end so despite this building tension we get mostly romance drama out of a film with a murderous sasquatch.

The film takes a hard turn when the characters reach the objective site and find Stan and Marcy torn to pieces. This leads to much more in-fighting and eventually finding out why Annie doesn’t talk about her past as her dad died in a mental institution after claiming to see bigfoot. Clearly freaked out the group heads backwards but ends up lost and Jed breaks his leg while they escape sounds of what they think to be bigfoot. Shortly after they get lucky again and find an empty cabin with a loaded shotgun inside.

Before the climax Ben and Paul challenge each other to prove that events are real by going outside. When they see it run by Paul knocks out Ben so he can have Annie to himself. As Ben comes to Annie goes out to find them both but just as Paul begins to lie to Annie bigfoot gets to Paul first and crushes him to death in possibly one of the funniest but visceral beat downs from a movie sasquatch.

Annie is then carried away with Ben following after her despite the risk. He catches up, fires a warning shot, Annie gets free then Ben kneecaps bigfoot and it runs off into the woods. The movie ends with everyone getting their story together based on the fear of what happened to Annie’s father.

The film isn’t bad. Even with the strange nature of the characters and the harder tilt toward drama from horror and comedy it still is a nice watch for no other reason than trying to understand how these characters manage to not abandon each other in the woods sooner. As it’s an independent film you might not see a copy anytime soon outside of the Indie film circuit so if adult drama and randomly murderous sasquatch is your cup of tea then look up the future screenings at the Irrational Films website. 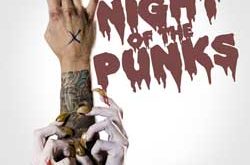