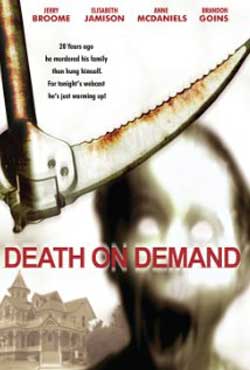 Upon hearing the title “Death on Demand,” one thinks snuff.  “On Demand,” like a variety of movies capable of instantly streaming onto your screen, except this title implies the delivery of various deaths accessible to faceless viewers.  Unfortunately for future viewers, this film failed to deliver on its implications.  It accumulates to another mock reality show interrupted by a legendary psychotic killer.  Throw in a Ouija board and lots of bad decisions.  We’ve seen this formula again, and again, and again. 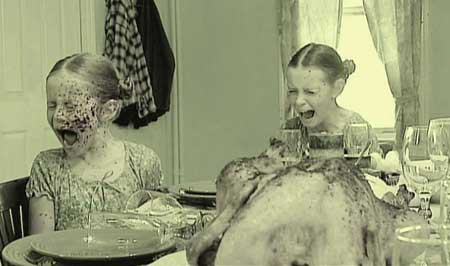 One thing worth noting is a noticeable trend in the homicidal maniac motif.  Unlike the contemporaries’ predecessors, where masked murders creatively annihilate a group of partying teenagers, recent productions favor starring a more mature cast, mainly college students or post-graduates in their mid to late twenties.  Perhaps this reflects the millennial attitude dominating our collective consciousness.  Or, maybe people are just growing up a little slower.  Either way, masked killers have decided to take out the Greek villages and deadbeats instead of their signature pre-pubescent hooligans.  The product results in what appears collegehumor.com’s stab at MTV’s Fear.

Richard, a typical trust-fund kid using college as a P.R. boost, devises a reality show where an undergrad cast engages in an interactive game with the incentive to win big bucks—well, big bucks to the loan-addled college student anyways.  Of course, this takes place on the eve of Halloween.  Richard, for his frat-tacular homies, hires a P*rn star for his cast, a P*rn star under the pseudonym “Velvet Luv,” whom partners up with shy and ditzy lesbian, Hayden.

Like in Fear, contestants must solve puzzles in an allegedly haunted location.  Richard picks a home abandoned after the impetuous outburst and massacre completed at the hands of former ice climber Sean McIntyre twenty years prior.  Other contestants include couple Tammy and Brad, as well as couple Darla and Biff.  All contestants (with the exception of “Velvet Luv”) represent fairly typical college caricatures.  Tammy, an air-headed blonde too quick to dress the Halloween slut, dates empty-headed football player Brad, a poster boy for the “Bro” movement whom happens to have a slight problem with erectile dysfunction, and by slight, I mean powerless to transform his limp noodle with any attractive woman.

Darla, a red-headed daddy’s girl who obviously frequents the New Age section of Barnes and Noble, dates ex-football player and somewhat detached and blasé Biff.  Numberless and faceless beer-chugging subscribers watch the costumed college co-eds blunder their way through McIntyre’s old abode until…the screen goes blank.  Yes people, the film doesn’t even show dozens of idiotic students puking and horrified at the actual viewing of the contestants’ deaths…the one variable that would have added a fine thematic snuff  flair to the film. 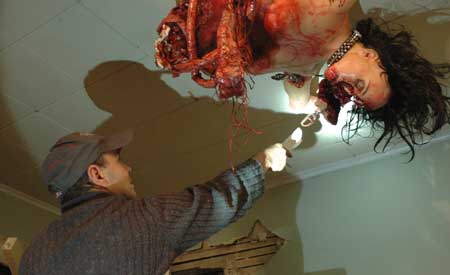 Fortunately, we do get to see their untimely and gruesome demises—albeit entirely too brief and sparse in-between all the trivial nonsense.  Interestingly, some of the deaths correlate to the essence of the character.  Velvet gets deep throated by (to the ignorant non-ice climber) an unidentifiable but razor-edged instrument; Brad goes down the dark tunnel to hell without his useless part, and closet freak Hayden meets her doom strapped to a bed in cuffs (her detached hands look similar to the foam kind sold at Party City).  Intuitive and tarot-reading Darla could have made it as the lone survivor…had her character held any consistency.  Seriously, if Darla isn’t screaming hysterically and overcome with eerie feelings of invisible evil, then she’s easily calmed down and coaxed back into the game by Biff. 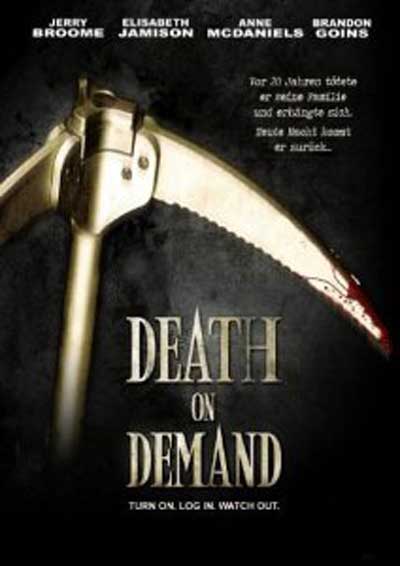 By far, the best sequences in this movie happen in the very beginning.  The black and white shots, the gritty camera angling, and low-quality audio give the scene a Lynchian feel.  Sean sits with his family, and somehow, the intense tension translates through the screen.  Mr. McIntyre, completely dissociated and irritated with stale family life, explosively snaps.  He brutally beats his wife to death against a hard, flat surface, all the while the camera focuses in.  He then decapitates his mother-in-law, her head flies through the air, just before chasing his screaming little girls—a well done scene, but, unfortunately, the rest of the film could not live up to this deliciously macabre start.  In the end, all we get is another slasher film, predictable, stale, and not nearly bloody enough. 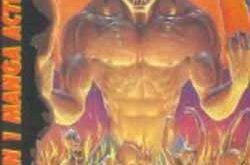 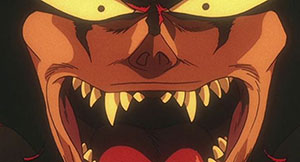