FOR IMMEDIATE RELEASE! Monday, August 4th, 2014 – Production begins today on a new major horror movie, entitled “Herschell Gordon Lewis’s BloodMania.” Acclaimed horror genre director Herschell Gordon Lewis will co-direct the project, which is being produced by HGB Entertainment Ltd. for Diabolique Films, the film division of the premiere horror publication, Diabolique Magazine. Mr. Lewis is internationally recognized as the originator of the contemporary splatter film, and he chuckles at being dubbed “The Godfather of Gore.” 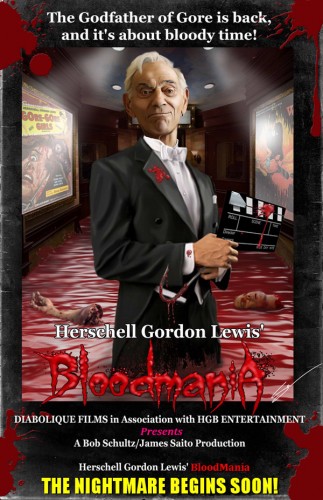 The Producer of the film is Diabolique Films executive James Saito, and the film is being shot in its entirety in Calgary, Alberta Canada. Lewis explained his “co-director” role, an unusual relationship with the production company: “BloodMania is a series of four episodes, each one unique. I’ll personally direct two, and Benjamin Ross Hayden (Agophobia, 2013) and Kevin Littlelight the others. So I can promise a variety of ‘flavors to satisfy even the most ardent horror fans!’”
Asked whether “BloodMania” will be a step beyond any film either he or anyone has directed before, the answer was as expected from this maverick director: “What do you think?” A major factor contributing to his reputation in the film industry is Herschell Gordon Lewis’s insistence on never repeating a theme. “BloodMania” he promises, will set a new standard for, as he so eloquently puts it, “off-the-wall outrage, doused in a wild sense of humor!”

Producer James Saito has assembled a cast of well-known Canadian actors and actresses, as well as crew highly skilled in special effects. “Enthusiasm is extraordinarily high,” he reports, “and much of that enthusiasm is the happy anticipation that our effects team will have the opportunity to participate in a motion picture whose potential is truly world-class. BloodMania is our gift to Mr. Lewis’ many fans and all fans of the horror genre.”

The release of “Herschell Gordon Lewis’s BloodMania” is set for Spring of 2015.