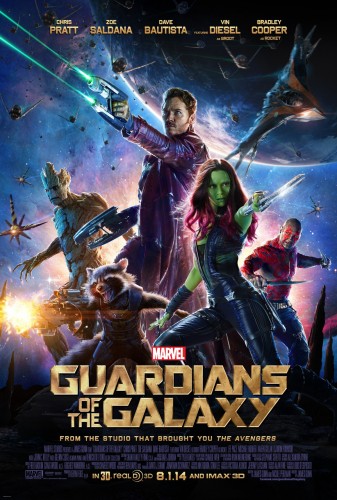 SYNOPSIS:
Peter Quill discovers the orb he just stole may hold far more danger to the universe than ever imagined. Together with a rag-tag team of bounty hunters, assassins and mad men, Quill and his Guardians of the Galaxy fight to stop Ronan the Accuser.

REVIEW:
Guardians of the Galaxy is everything you want from a sci-fi action film from Marvel Studios that is ballsy enough to introduce all-new, generally unknown comic characters, worlds, alien races and over-the-top cosmic concepts. Director James Gunn’s first foray into the Marvel Universe accomplishes the impossible, recapturing that magic that stunned audiences with Iron Man – even surpassing it. It has heart, adventure, comedy, characters and high stakes. It is as entertaining as a Summer Blockbuster can come. It’s bloody brilliant! By the time Chris Pratt as Peter Quill – aka Star-Lord – does his best Indiana Jones meets Gene Kelly moves to 80’s pop grooves in the opening sequences, you are hooked – it has you by the heart, by the funny bone, by your entire wide-eyed, teary-eye imaginations. The cast is fantastic. The visuals are extraordinary. The story is light and fun but dark enough to wield dire consequences. If you are familiar with Marvel Comic’s cosmic continuity, then the story is rich with background, color and possibilities. Guardians of the Galaxy is this Summer’s best film and Marvel’s most confident and entertaining effort to date. Bravo, Gunn, bravo! 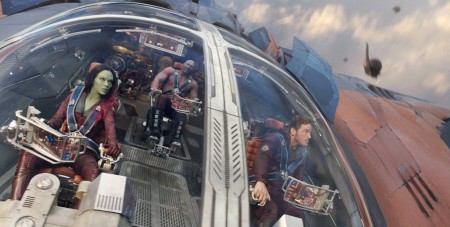 The script begins with a young Peter Quill facing mortality, loss and denial at a very young age when he is snatched up by an alien space craft and carted off to the farthest reaches of the galaxy. Cut to the present with an adult Peter Quill dancing his way through a deserted world in search of a high sought after prize, a mysterious sphere. Soon Quill finds himself on the most wanted lists from both The Ravagers he works for and Ronan, The Accuser, a monomaniacal Kree out to destroy the Xandarians and the Nova Corp. Soon Quill finds himself in custody, teaming up with a group of fellow incarcerated losers: Gamora, Drax the Destroyer, Rocket Raccoon and Groot. Together they must stop Ronan and save the Galaxy. 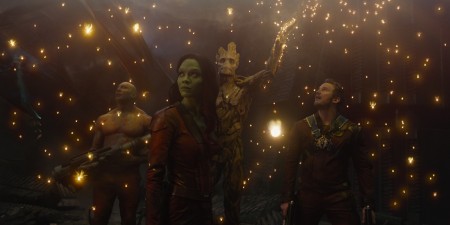 James Gunn did it! He flipping did it! He wrestled some of the most inaccessible, least known Marvel properties out there and crafted them into the perfect fodder for a funny, heart-felt, exciting, extraordinary experience. More than a film, Guardian of the Galaxy is an event, an introduction to endless possibilities, characters and stories rich in over 60 years of Marvel Universe building. The balance of story, character, action and emotion – yeah, emotion – is nearly perfect. He provides brief, small quiet moments where characters acknowledge each other, their surroundings and the audience with a simple glance, smirk or smile. And he delivers large, galactic-sized action worthy of the best Star Wars film. The music choices breath life and color into the spectacle complete with meaning in both their tone, their lyrics and their purpose in being included in the film in the first place. The music choices are very much in the vein of Quentin Tarantino which is unusual in a super hero film. Gunn manages to make even the most fantastical elements of Guardians of the Galaxy familiar and fascinating without being too foreign, even for a full-fledged science fiction film. His cinematic sensibilities are a wondrous marriage to the cosmic Marvel Universe in the most pleasing and exuberant way imaginable: tone, humor, character, composition, action, depth, heart and spectacle. 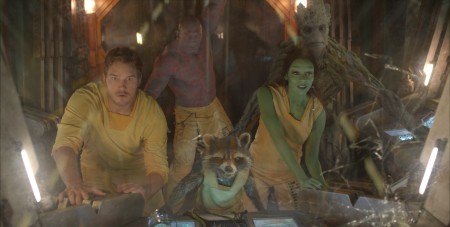 Chris Pratt proves the perfect choice to embody Peter Quill, Star-Lord, with a pathos, humor and hunger for companionship that is authentic and imitable breathing life and soul into Guardians of the Galaxy. He affects those around him from Gamora, to the Nova Corp, to Yondu and the Ravagers. He is flawed but honest and admirable. Pratt gives Quill the needed Terran sensibilities buried in all the alien races and foreign, other-worldly concepts. His whimsical, light-hearted approach pays off when the other Guardians rise to stand next to him and when the Kree bend to recognize his call name. “Finally!” smiles Quill – and the audience along with him. He is Han Solo and Luke Skywalker rolled into one. He is the patriotic statue of Steve Rogers combined with the reckless appeal of Tony Stark. He is a loser, a trouble-maker, a hero. 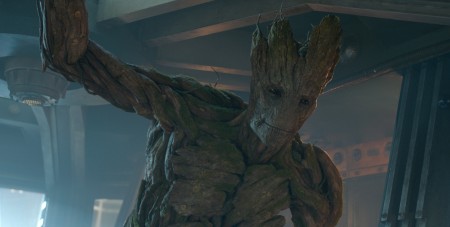 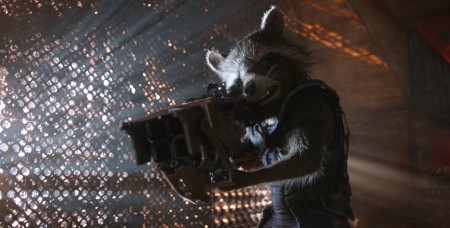 Rocket and Groot are names that will soon rest on all young fan boys and girls minds. Rocket is a chaotic little fur-ball, sarcastic and self-adsorbed. Groot is his woody companion speaking only in three words, “I am Groot!” Both characters steal the film. They are the ideal team, comic and straight man; however, in Guardians of the Galaxy they play off the other characters with equal affect. Rocket often leads the team with his elaborate, and oddly effective, hair-brained plans at times deadly serious but never so much so to forget to play a practical joke. Bradley Cooper provides the perfect voice for the rascally rodent, giving him edge, humor and heart. Groot on the other hand is pure wonder, full of surprises which begin with the dialog based solely upon “I am Groot!” voiced by Vin Diesel. Diesel’s delivery and pitch combined with the tremendous digital posturing create the most lovable, adorable, funny and courageous character of the bunch.

Zoe Saldana and Dave Bautista make up the remaining characters of the Guardians. Saldana is Gamora, the daughter of Thanos who betrays the villain Ronan to join Quill, Rocket and Groot in saving Xandar from destruction. Bautista is Drax the Destroyer who is hell bent on assassinating Ronan for killing his wife and daughter. Zoe is marvelous as Gamora, bringing a strong beauty to the green-skinned role. Her mistrust of Quill early on is snappy and hilarious while her later admiration and, perhaps, love for the Terran illustrate a softer side providing her character growth, passion and purpose. Bautista is the true surprise in Guardians of the Galaxy, his dead pan delivery is pure comic gold while his joyful laughter as their space craft slams into the Dark Aster, Ronan’s ship. His humility and drive make for a winning character. 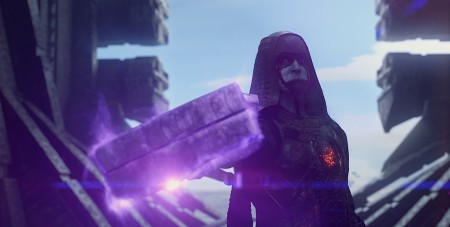 Guardians of the Galaxy is full of wonder and spectacle, sights and designs of pure imagination. From the prison of Kyln to the home planet of Xandar to the amazing world known as Knowhere, the locations in the film never fail to astonish. Beyond the Guardians, the film is populated with dozens of various characters, races and critters. The Nova Corp are led by Nova Prime played by Glenn Close. The Collector played by Benecio del Toro has his sights set on obtaining the mysterious orb and the dangerous prize housed within its shell. Yondu (Michael Ripper) and his Ravagers are hot on Quill’s tail reluctantly but joyfully siding with him to face the terror of Ronan the Accuser (Lee Pace). Thanos (Josh Brolin) also makes an extended appearance. If there is a flaw in Guardians of the Galaxy it is in its main two villains, Ronan and Nebula (Karen Gillan) who are barely more than one-note threats – powerful yes, but lacking emotional conflict and fleshed out drive. Regardless, the film soars due to its main cast, the vast universe of supporting characters and the simple story of stopping a single threat allowing the larger threats dancing around the edges to color and shape the main plot of stopping Ronan. 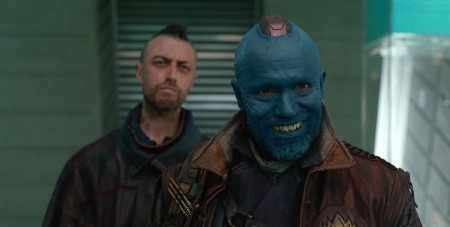 Guardians of the Galaxy is a rare gem, an implausible impossibility, an original film with unknown properties given the attention and respect – and love – only established franchises seem to receive these days. Not many people will know who the Star-Lord, Rocket and the Guardians are going into the film, but coming out each and every one of them will remember them fondly. The film succeeds on every single level, the acting, the directing, the music, the cinematography, the sound design, the effects, the art design, the digital craftsmanship, the 3D, the story. It is wondrous and breathtaking. It tugs at the heart, it fills the imagination with possibilities, it tickles the funny bone and it leaves its audience satisfied and entertained. See this film, see it ten times, see Guardians of the Galaxy. 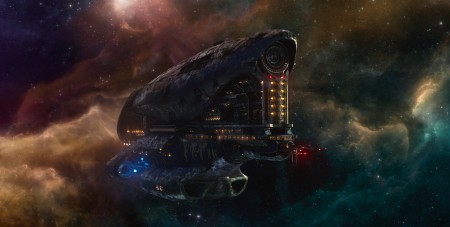 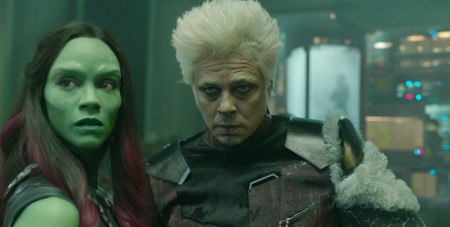 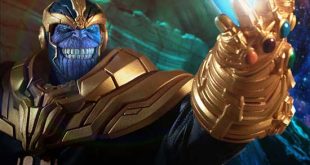 One:12 Collective Thanos – The Mad Titan wields the power of all Six Infinity Stones