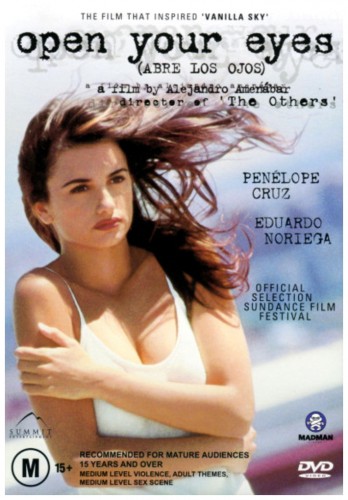 “The handsome and wealthy César is very successful with women and is having difficulties getting rid of Nuria, his last affair. His best friend, Pelayo, is unlucky with women and jealous of César. At his birthday party, César meets the gorgeous and sexy Sofia, currently dating Pelayo, but they are immediately attracted to each other and spend the night together in her apartment. The next morning, César finds Nuria outside of Sofia’s building, and he accepts her offer of a ride home. However, she commits suicide, crashing her car against a wall, but César survives the crash with his face completely disfigured. The doctors do not have the technology to restore his face and César is absolutely depressed and missing Sofia. One night, César meets Sofia and Pelayo in a bar but he drinks too much and passes out on the street. However, the next morning, Sofia finds César on the street and kisses him, telling that she loves him. Then the doctors tell him that they are able to fix his face. Out of the blue, César’s happiness changes and he finds that he is trapped in a nightmare.” (courtesy IMDB)

Chilean-Spanish filmmaker Alejandro Amenábar has (so far) won eight Goya Awards and at least one European Film Award. He has written the screenplays to all of his films and composed almost all of the soundtracks. Even as a child, Amenábar refused to watch television, preferring feature films and going to the movies. His other passions were reading and writing stories, absorbing any information he could. He also composed melodies with the keyboard and guitar with the same ease as when he wrote his stories. Before becoming a director, Amenábar worked several jobs until he had enough money to buy his own home movie camera. Amenábar entered Madrid’s Complutence University where, after numerous failures, he decided to give up film appreciation altogether and go straight into directing. While attending university he made many like-minded friends who would become quite important throughout his career, including Sergio Rozas, Carlos Montero, Eduardo Noriega and Mateo Gil. 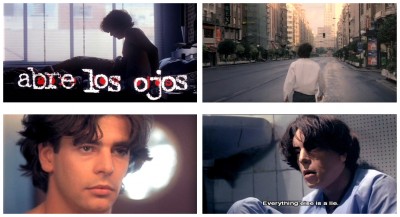 During the early nineties Amenábar made a few short films – La Cabeza (1991), Himenóptero (1992), Luna (1995) – coming to the attention of producer José Luis Cuerda, which led to him becoming the producer of Thesis (aka Snuff 1996), a thriller set in the Complutense University which he once attended. This gained the attention of critics in the Berlin Film Festival and Amenábar won seven Goya Awards, including Best Picture and Best New Director. With his potential now recognised, Amenábar’s next project was the ambitious Abre Los Ojos (aka Open Your Eyes 1997), a science fiction film that was to enjoy success at many international festivals. Famously, actor Tom Cruise saw the film at one such festival and, even before the end credits had finished rolling, he was on his phone negotiating the American remake rights. 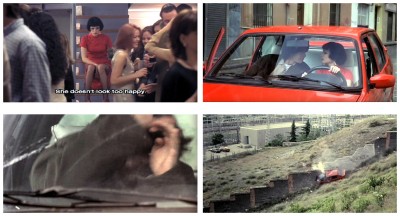 Open Your Eyes tells the story of César (Eduardo Noriega), a rich handsome young man who is enjoying life to the fullest, attracting women with his money and good looks. This often irritates his best friend Pelayo (Fele Martinez), who realises he can’t compete with his friend’s charming personality or striking good looks. On the night of his 25th birthday, César meets the gorgeously beautiful Sofia (Penélope Cruz) and thinks he has found his perfect woman. He decides to use Sofia to help ward off his date for the night, Nuria (Najwa Nimri), who confronts him the next morning in a jealous possessive rage. César tries to appease her and, when he agrees to accept a ride from her, she drives her car off the road, killing herself and permanently mangling César’s once handsome visage. 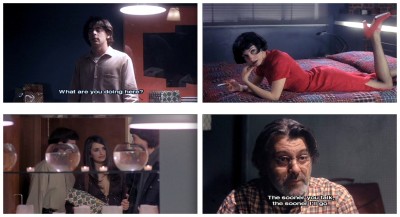 Waking up in a psychiatric prison for a murder he doesn’t remember committing, and prompted to wear an expressionless mask to hide his scarred face, César – with the help of sympathetic psychiatrist Antonio (Chete Lera) – tries to figure out what happened and why he keeps seeing images of a man (Gerard Barray) on television touting the benefits of cryogenics. As he does so, César’s life begins to unravel as reality and fantasy begin to blend together in a nightmarish fashion that may just drive him mad if he cannot remember a past that may or may not have happened. It’s revealed that shortly after his disfigurement, César signed up with a cryogenics company called Life Extensions, to be preserved and to experience extremely lucid lifelike dreams, providing a fantasy based on the past to clients who are reborn in the future. He had actually committed suicide at home then placed in cryogenic suspension, and all his experiences from about the middle of the film have been a dream, spliced retroactively into his actual life and replacing his true memories. 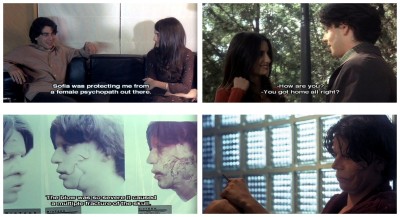 The story touches on and passes through so many genres that it defies classification as any one single theme, although ‘science fiction thriller’ would be pretty close to the target. However, the clever blurring of reality and illusion seamlessly shifts from melodrama to romance to Noir to science fiction as the limits of ‘personality’ are explored. Director and co-writer Amenábar effectively blends together many diverse genre elements using conventional narrative techniques such as flashbacks, dream sequences and scenes in the ‘present’. The way these techniques are used to piece the film together gives the audience the impression that they are unraveling the convoluted plot along with the protagonist. Open Your Eyes remains ambitious and disturbing while looking stunning, which is why it was famously given the Hollywood makeover in the Tom Cruise–Penélope Cruz vehicle Vanilla Sky (2001) directed by Cameron Crowe, in which Cruz reprises her role of Sofia. 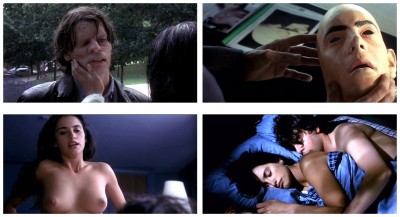 The first overwhelming impression induced from Vanilla Sky for anyone who had already seen Open Your Eyes, was déjà vu. Not just in story, character and tone, but in execution, composition and camera movement. It stars Tom Cruise in the lead role (renamed David Aames), Penélope Cruz reprising her role as Sofia, Cameron Diaz as the girl who disfigures David (renamed Julianna Gianni), Jason Lee as the friend (renamed Brian Shelby), and Kurt Russell as the psychiatrist (renamed Curtis McCabe). The film also transplants the action from Madrid to New York, and follows the original plot pretty closely but makes several changes to the ending. This story about a rich boy who falls in love with the girl of his dreams, a car accident, horrible facial disfigurement and allusions to a way of life after death is made tedious the second time around. In fact, everything preceding the big rooftop revelation in the third act is time-filler. 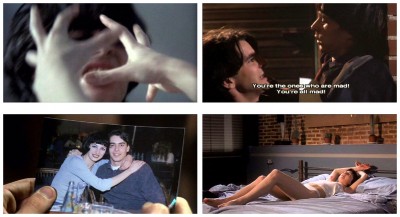 Amenábar went on to direct The Others (2001) starring Nicole Kidman, one of the best horror movies of the last two decades. It was very successful at an international level, especially in Spain, where it was the most viewed film that year. Amenábar then made The Sea Inside (2004), a real-life story about quadriplegic Ramón Sampedro (Javier Bardem) which addressed issues such as euthanasia, abortion and the right to a dignified life, followed by Agora (2009) starring Rachel Weisz and Max Minghella, the most expensive Spanish film ever made with a budget of fifty million euros. Amenábar’s next film has the working title of Regression starring Ethan Hawke, and shooting began only a few months before this writing. Speaking of this writing, I’ll now take my leave of you, and politely ask you to please join me next week to have your innocence violated beyond description again while I force you to submit to the horrors of…Horror News! Toodles! 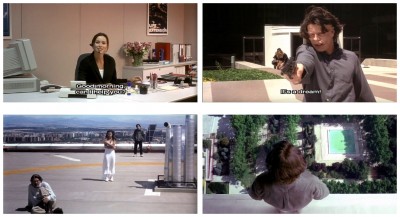 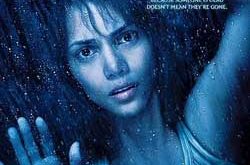