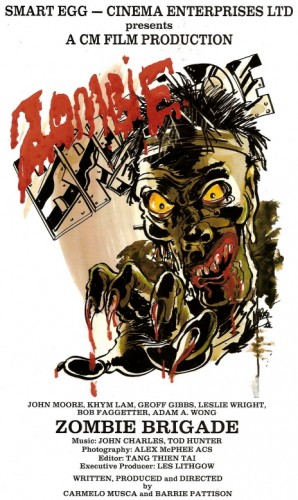 “When an amusement park is built on the grounds of an old cemetery, the dead rise to take revenge.” (courtesy IMDB)

REVIEW:
Zombies! The flesh-hungry undead have been a mainstay in mythology dating back to the original epic of Gilgamesh, in which Ishtar threatens to open the gates of the Netherworld releasing the dead to eat the living. The first film to exploit the word was White Zombie (1932), starring my favourite Hungarian ham Bela Lugosi, is definitely better than most early zombie movies but, I must hasten to point out, these zombies are not the flesh-eating variety. There was a time when all zombies were leisurely-paced manual labourers who never rested, never got peckish and never formed trade unions. Zombies were initially uncommon in cinema, but their appearances continued sporadically from the thirties to the sixties, with notable entries like I Walked With A Zombie (1943) and Plan 9 From Outer Space (1959). Since George Romero‘s Night Of The Living Dead (1968), their official job description now includes an insatiable appetite for brains and, in some recent films, have even become champion sprinters! 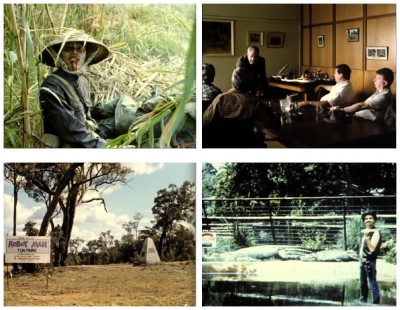 Romero combined the zombie with the vampire, resulting in an apocalyptic vision of flesh-hungry ghoul-like plague monsters. He used them as a way to comment on real problems such as government ineptitude, biological warfare, slavery, greed and exploitation while indulging the viewer’s post-apocalyptic fantasies. Night Of The Living Dead became one of the most influential films ever made. It’s been remade twice, once officially in 1990 by Tom Savini starring Patricia Tallman, and once unofficially as Night Of The Living Dead In 3-D (2006) starring, well, no-one really, making it more faithful to the original. It was released in a colourised version in 1986 with green zombies and again in 2004 with flesh-coloured zombies. John Russo, the original co-writer, released a remixed version with added gore for all the kiddies as the 30th Anniversary Edition (2008) and started his own comedy version of the franchise, The Return Of The Living Dead (1985) films which, at five films, has almost as many sequels as Night Of The Living Dead. 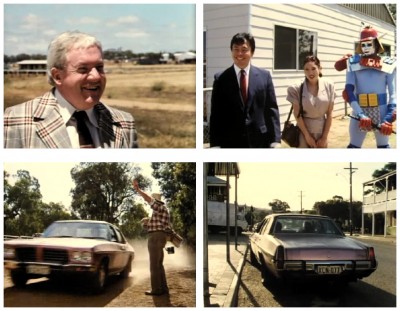 The official sequel Dawn Of The Dead (1978), which was itself remade in 2004, has had it’s own fair share of unofficial sequels, like Lucio Fulci‘s Zombi II (1979) followed by Zombi III (1988) which was called Zombie Flesh Eaters II in Britain, and don’t get me started on the American re-titling of the Zombi series, which is up to Zombi VI Monster Hunter (1981). Scattered liberally among the bigger-budgeted American and Italian zombie films of the last four decades are literally hundreds of low-budget amateur productions, which brings me to the little-known Australian horror film Zombie Brigade (1986) also known as Night Crawl also known as Zombie Commando. It has the immediate distinction of being one of the very few Australian zombie movies ever made, and the added distinction of involving deceased Vietnam veteran soldiers. Some Americans may not know that many Australians fought and died (6,400+ casualties) in Vietnam. Unlike Hollywood, we have rarely explored that particular time in our history. Zombie Brigade may not be the best place to start, but it is a start, about how contemporary society has disgraced the ideals and values that the Australian Army fought for, corrupted by commercialism and greed. 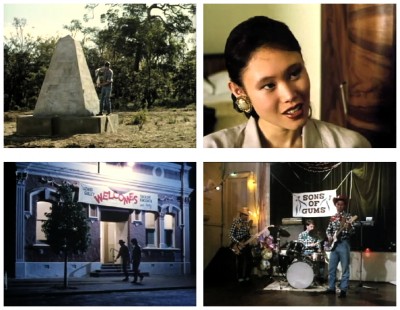 Zombie Brigade takes place in a small Australian country town named Lizard Valley, where Mayor Ransom (Geoffrey Gibbs) has secretly purchased most of the surrounding land, and convinces the local council to build a Japanese-financed theme park on a prime location just outside town. Unfortunately, the property is already the site of a war memorial to the fallen Australian troops in Vietnam. Japanese developer Kinoshita (Ron Lee using the non-de-blame Adam A. Wong) and his translator Yoshie (Khym Lam who also performs the film’s theme song) have been flown in to approve the ‘Robot Land’ theme park dedicated to the cartoon superhero Robot Man. Kinoshita is welcomed by a ceremony demolishing the war memorial which, for reasons that are not made exactly clear, revives the long-dormant dead who start chomping on the locals. 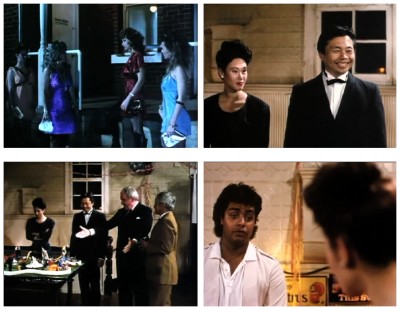 A local Aboriginal elder (Michael Fuller) revives his ancestors in an attempt to stop a few of the Vietnam veteran zombies who, it turns out, were victims of a Viet Cong bio-engineering experiment turning them into vampires. That’s right, zombie-vampires, two monsters for the price of one! Soon enough Lizard Valley is overrun by vampires, and two unlikely heroes emerge: Jimmy (John Moore), a young Aboriginal man who works for the Mayor, and Yoshie, who is obsessed in becoming a powerful CEO. Our two heroes discover that, in order to stop the threat of the vampire horde, they need to use a little Dreamtime re-animator magic. They manage to raise the deceased Australian army from the town’s cemetery, the Zombie Brigade, which results in a battle between undead armies. They clash, then shake hands and make up. With peace restored among their ranks, the two armies form an alliance, raze the disgraced town to the ground and vanish into the night. No one complains and the survivors live happily ever after. 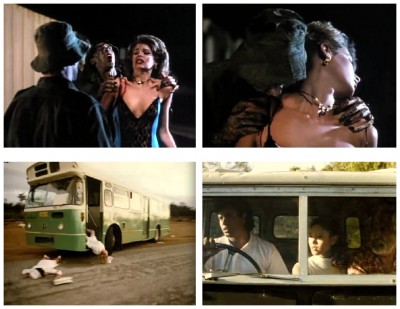 As one character says, “We’ve been planning this for years, how could anything go wrong?” Basically, it’s a great idea poorly executed but, when it comes to zombie movies, lack of production values is not necessarily a disqualifier and, even though it dissolves into a mess, Zombie Brigade is just as interesting as any other Australian film around that time. It’s definitely a zombie movie, but there’s a twist: these are good zombies with moral values, ethics, mercy and valor. This is evidenced when they first fight the vampires, but soon sympathise with them and allow the vampires to join their cause. It’s a terrific idea that motivates both zombies and vampires, giving them good reason to be angry and, while some of the characters may seem generic, most are both interesting and rather original. Like Romero before them, the writing-directing team of Barrie Pattison and Carmelo Musca present their social commentary on the issues of racism and equality. The two protagonists, for example, is an Aboriginal male and a Japanese female, which immediately challenges the viewer’s expectations. 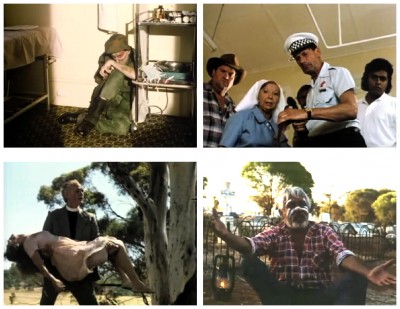 Unsurprisingly, the government-sponsored film fund Screen West refused to invest in a movie with the working title of The Zombie Brigade Of Lizard Valley, and it was one of the last films to be made under the then-available tax concessions. Although writer-directors Pattison and Musca both currently live in Australia, they couldn’t be further apart. Pattison resides on the east coast in Sydney and has switched his focus from feature films to documentaries which he directs and sometimes edits. After Zombie Brigade started making its money back, Pattison was approached by investors to work on a new project but was unable to find anything he considered worth while pursuing. Musca, on the other hand, currently resides on the west coast in Perth also making documentaries and managing his own production company. His prime motivation for working on Zombie Brigade is simple: “It was a film that didn’t rely on who was in it, it was the subject matter that was important.” Alex McPhee‘s cinematography is remarkably good, showcasing Australian landscapes and the rustic town in 35mm with apparent delight. Australia has always produced fantastic photographers (Dion Beebe, Russell Boyd, Callan Green, Andrew Lesnie, John Seale, Dean Semler) and Mcphee proves that point. 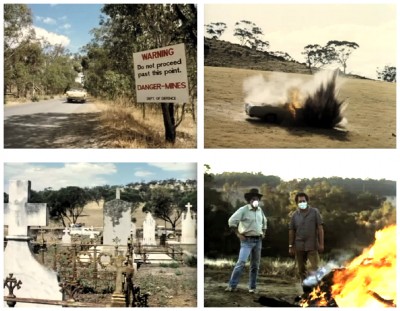 Speaking of which, Zombie Brigade was the very first West Australian film to be shot on 35mm and it certainly adds to the magic. Mcphee has since moved to the United States, working on dozens of short films and documentaries. Another successful crew member is continuity manager Jan Piantoni, who is now one of Australia’s leading continuity consultants. Jimmy was the very first film role for actor John Moore, who went on to be seen in some of your favourite television shows: Phoenix, The X-Files, Highlander, Fallen Angels, Millennium, Viper, The Outer Limits, The 4400, Flash Gordon; and in films such as Pitch Black (2000), Get Carter (2000), Cold Turkey (2003) and Dreamcatcher (2003). He was also nominated for a Best Lead Actor AFI award for his performance in Day Of The Dog (1993). Khym Lam, who plays the Japanese translator, had her big break two years after Zombie Brigade when she was given the lead role of Julie Soong in the highly regarded mini-series Tanamera: Lion Of Singapore (1988). As well as having a semi-regular role in the inexplicably popular soap opera Neighbours, she also played the newsreader in the comedy series DAAS Kapital in 1991, when she met and married Doug Anthony All-Stars member Richard Fidler. 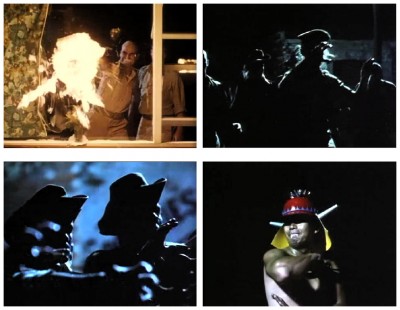 After his role as Mayor Ransom, Geoffrey Gibbs did a few more films and television shows before becoming head lecturer and dean of the Western Australian Academy of Performing Arts (WAAPA) coaching actors like Hugh Jackman, Dominic Purcell and Frances O’Connor. There’s a few more future stars to be spotted in Zombie Brigade, such as Ron Lee (Wildside, Jekyll & Hyde, The Lost World, All Saints, Giant Monster Trashes City), Ian Paul Cassidy (Nightman, Walker Texas Ranger, Desperate Housewives, 24, Numb3rs, Monk), Kristof Kaczmarek (Blue Heelers, Stingers, Rush, The Doctor Blake Mysteries) and Adrian Mulraney (Neighbours, Halifax FP, City Homicide, Miss Fisher’s Murder Mysteries). With a tiny budget of AUD$860,000, Zombie Brigade wasn’t exactly the blockbuster the filmmakers had hoped for, but it easily made its money back and acted as a career springboard for many of the inexperienced cast and crew involved. 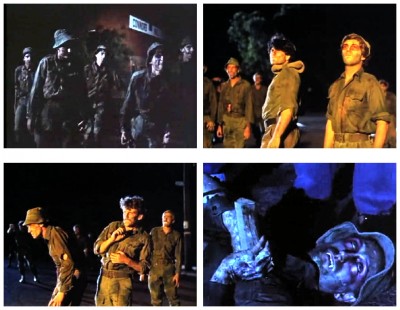 The production was riddled with challenges: They only had one evening to shoot the night-time scenes, for instance, because they couldn’t afford to pay any more overtime and when time came to burn down the town, there was a country-wide total fire ban in place that month, and three separate local fire brigades arrived on-set to keep it under control. In fact there were so many unusual behind-the-scenes occurrences that Ron Lee – who was so embarrassed to be involved he chose the pseudonym Adam A. Wong (in tribute to Anna May Wong) to play property developer Kinoshita – has got it into his head that it has the potential for a movie in itself, a humorous documentary recounting the bizarre events leading up to (and following) the release of Zombie Brigade almost three decades ago. Just this month, Lee has gathered a small team of consultants to contemplate this very project: director Barrie Pattison, screenwriter Kym Goldsworthy, comedian Ewen Campbell, producer Graham Garfield Barnard and yours truly, Nigel Honeybone. Keep an eye out for it (ow!) on film-funding sites in the very near future. Having demonstrated to you the perils of probing the dark depths of the Australian independent film industry, I’d like to profusely thank Brett Garten, Scott Holdsworth, Ron Lee, Andrew McDonald, Gregory McNamee, Carmel Musca, Barrie Pattison and the cast and crew of Zombie Brigade for greatly assisting my research for this article. Now I’ll vanish into the night, but not before inviting you to rendezvous with me at the same time next week when I’ll discuss another dubious treasure for…Horror News! Toodles! 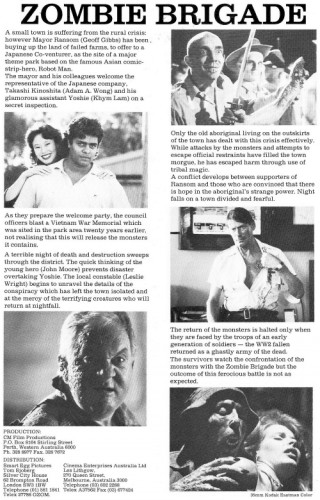