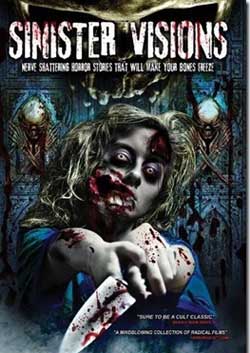 Are you ready for a terror attack combining both succubi, women possessed by demons, serial killers in electric chairs, aggressive zombies, avengeful crazy women, men with very deep emotional scars and ofcourse a fair amount of amputation and gore? Add a bunch of dark humor to the mix and you have SINISTER VISIONS!

One type of film that goes underappreciated by audiences, myself included, is the short film. They are typically seen as lesser products because they tend not to be shown theatrically as feature films are. This outlook is changing with the shift of cinema since everything is becoming much more digital. It is easier to share a short film through the internet than it ever was through theaters. Short films are movies too. They might not have the spectacle of big budget summer fare but they can tell a story in a concise way, removing the unnecessary bits. They are a great way to hone certain skills as a filmmaker. They can make for entertaining watches that need little time set aside. 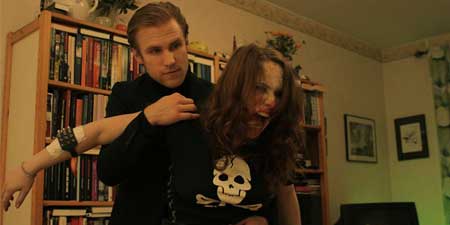 The reason that I bring this whole idea up is a movie called Sinister Visions. It is an anthology film comprised of some previously released short films and other unreleased short films. Running an hour and twenty four minutes total, each of the seven shorts takes up no more than twenty minutes. A few of them are much shorter than that. As with any anthology, the quality varies between each segment and each segment has its own good and bad aspects. I will take a look at each short and go over it in some detail. 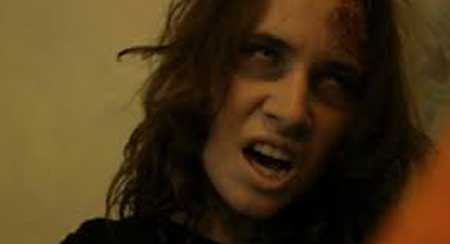 First up was a Swedish short film titled Succubus. It tells the story of Emma (Kat Herlo), an architecture student who becomes possessed by a succubus. The succubus wants nothing more than for Emma to devour some local men. There was nothing that made this short stand out among all of the others currently out there to see. Nothing was done exceptionally well or poorly outside of the interesting creature work for the succubus. The biggest flaw was that it was not memorable. There were no big scares and it ended as abruptly as this paragraph.

Following that segment, there was an untitled period piece about the two final survivors of a zombie outbreak in a science lab. This was one of the super short bits in Sinister Visions and you could easily miss it if you were not paying attention. There is not much to say about it other than the fact that the comedy in the short worked well and kept it feeling fresh.

The third segment was one that I will call Holdcare. Outside of the distracting accents, this was probably the best segment of the entire film. It was about having zombies as pets. Sure, it is an idea that has been explored in other films to better effect, but the satire of television commercials helped to make this short shine in a way that I could not have expected. Like the segment before, it was rather short and could easily be overlooked. It deserves to be watched, though. Do not miss this one when watching Sinister Visions. 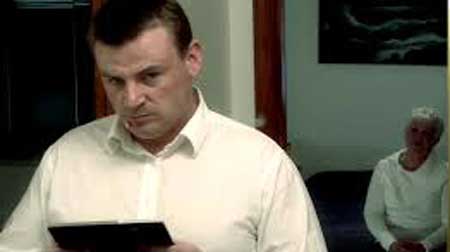 My Undead Girlfriend was the next segment in Sinister Visions. If I were to consider it an homage to something that came before, it would be Weekend at Bernie’s. Keith (Stefan Jonason) has dinner obligations with his soon-to-be in-laws. The problem is that their daughter, Keith’s fiancée, is now a zombie. He must pretend that she is fine so that he can marry her and get her family’s money. This short film had the best character work out of the entire compilation. The story built to the climax at a steady pace with the characters revealing more of themselves throughout the story. The dark comedy shone and the performances were solid. It finished out the zombie trilogy within Sinister Visions which was a trilogy of short films that I would highly recommend. 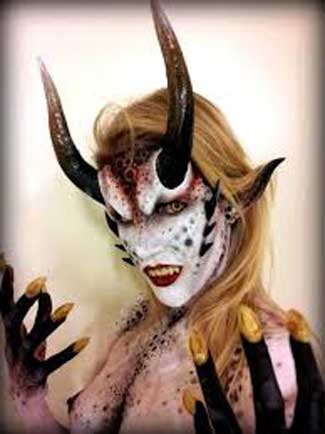 Mother Knows Best told the story of a man who has an overprotective mother that does not trust any woman he dates. The segment was a clear homage to Psycho, without the suspenseful finesse that Hitchcock brought to his classic. Instead, it had more blood. Blood does not always make for a better film. It was still decent; however, it was nothing to get excited about. I’m not going to think about this movie too often when thinking about horror short films or anthology segments.

The penultimate installment was titled Scorned Woman. A woman is holding another woman hostage for being a mistress to her husband. There was a lot of yelling and quite a bit of nudity. The short played out exactly as you would expect it to. It never got exciting. It merely began at one intensity level and remained at that level for the duration of the runtime. The only source of tension throughout the segment was in a “when will this end” kind of way.

Finally, there was Genital Genocide, the last segment of Sinister Visions. The title was immediately a turn-off and the short was not much better. A man is being put to death on the electric chair for raping a bunch of women. He recounts all of the violently fetishized rape to the victims’ families. The acting was bad, the subject matter was off putting, and the climax (pun not intended, yet still great) was unearned. It ended Sinister Visions on a sour note.

By the end of Sinister Visions, I was looking to the movie gods to end it for me. It was not that the anthology was terrible. There was only one segment in it that I would describe as outright bad. The problem was that most of the movie was boring. It was well made for what it was and the intentions were good, but most of it lacked any entertainment value. If you were to watch anything in Sinister Visions, I would recommend that you simply go to YouTube and find My Undead Girlfriend. I saw that it was on there with the Holdcare commercial. They were the only segments that would justify watching the anthology.

Anthologies are interesting in that they allow directors a way to tell stories that would not be able to constitute a feature length film. However, you very rarely find a great anthology. Most anthologies get weighed down by their lesser segments. Sinister Visions is a perfect example. There are some neat shorts amidst a lot of dull, forgettable fare. When all is said and done, I appreciate the good. But it does not make up for the rest of the movie. And that is how I usually feel about anthologies. 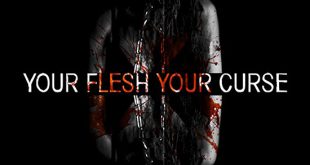