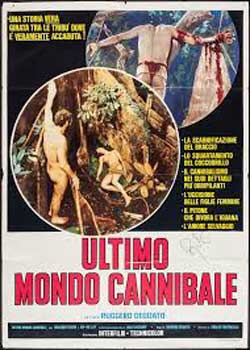 An oil prospector escapes from capture by a primitive cannibal tribe in the Philippine rain forest and heads out to locate his missing companion and their plane to return home.

You already know Cannibal Holocaust, director Ruggero Deodato’s most (in)famous film to date, but did you know that he actually had a “cannibal trilogy,” Cannibal Holocaust (1980) being the middle film? It’s true, I wouldn’t lie to you. Part three of the trilogy is Cut and Run (1985), a film loosely based around the Jonestown Massacre and the drug trade. Part one is Ultimo Mondo Cannibale (1977), which you may know under the title Last Cannibal World, or a heavily censored The Last Survivor, or even the capitalizing on Cannibal Holocaust re-naming, Jungle Holocaust. Whichever name it goes by, from the very first scenes of a plane flying over a vast green expanse of trees and the unknown, you pretty much know it’s both an Italian cannibal film and a Deodato film. Which means you probably also have a general idea of what you’re in for. 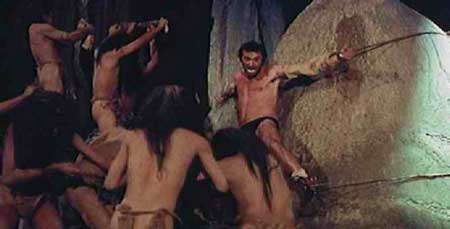 In what is billed as a “true story,” a small plane of four passengers prepares to land on the Island of Mindango. We have the pilot, Charlie (played by Sheik Razak Shikur), the survivalist, Rolf (Ivan Rassimov, a veteran of the cannibal genre; see also Lenzi’s Eaten Alive! and Sacrifice!), our protagonist, Robert Harper (Massimo Foschi), and a woman who, if she was in Star Trek, would surely be wearing a red shirt, Swan (Judy Rosly). Their mission is to meet up with a group of Harper’s associates who had previously set up camp on the island, some kind of expedition. Do you think they are still there? I’ll give you a clue…no, they’re not. After having trouble landing due to a neglected airstrip, causing damage to the plane, Robert and Rolf find the camp deserted. As they head back, they get lost, then find a skull which they somehow immediately recognize as that of one of the crew. By the time they reach the plane, it is too late, and Charlie says they’ll have to wait until morning to leave. Cue natives’ entrance, stage right. 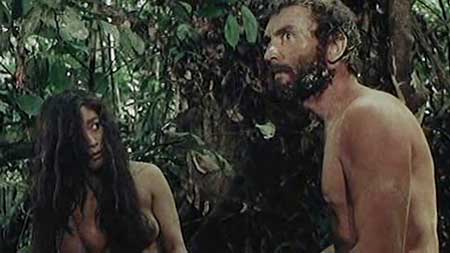 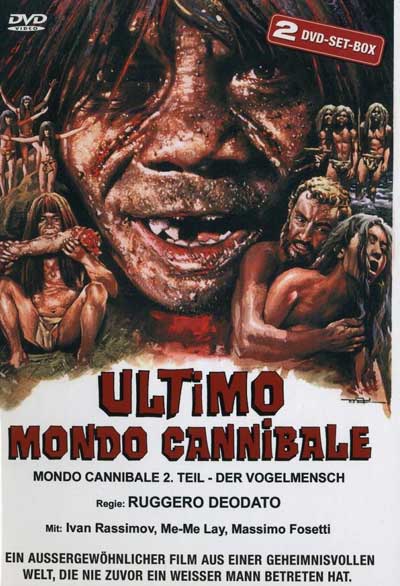 After Swan needs to pee and is subsequently kidnapped/killed by the cannibals in the dead of night, the three remaining men decide delay their morning’s departure and instead go searching for her. As a result, Charlie hits a booby trap and is smashed by a swinging ball of spikes. Robert and Rolf find the natives’ camp, where they are roasting Swan for dinner. They escape, and it is here that Ultimo Mondo Cannibale becomes a little ridiculous and long winded. The two create a very complicated makeshift raft, then get separated at a rough, rocky waterfall. Rolf disappears, but Robert reaches land, eats some mushrooms off a log, pukes out green stuff, and then is captured. 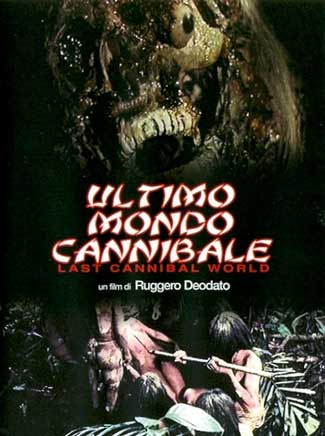 If you’ve seen more than one of his films, you recognize that Deodato has a signature style. In the case of his early cannibal films, you’ll probably see some real animals die (there are lots of animal deaths here, some stock footage, some questionable as to whether they were real or effects, but we can guess). The “good” guys are nearly indistinguishable from the “bad” guys, and often you find yourself rooting against the protagonists. And of course, there will be a handful of very unsettling images packed in there, waiting to take you by surprise (Ultimo Mondo Cannibale brings us a gutted crocodile, a riverside birth complete with bitten off umbilical cord and subsequent throwing back as if it were a small fish, and a ridiculous, out of nowhere rape scene). 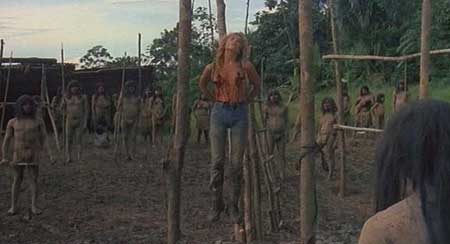 The film does end strong, but it’s the middle that seems almost an afterthought. When Robert is captured, we have a series of events go on that don’t advance the story, but more seem added in to further illustrate what we already know – the natives are “primitive” and they are cannibals. They tie Robert up and hoist him into the air, thinking he can fly. They torture one of their own. An attractive native girl (played by an obviously not native actress, Me Me Lai) takes a liking to him and gives him a “hand.” The natives kill a snake, they kill a bird, etc, etc, etc. It’s almost as if Deodato is getting the stuff that doesn’t fit out of the way in preparation for his upcoming masterpiece. Finally, Robert does escape, taking the woman with him, and then things finally start moving again, often brutally. 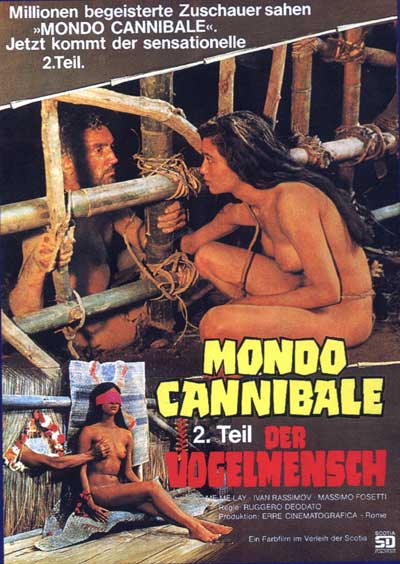 As a hardcore horror fan, if you were to watch Ultimo Mondo Cannibale today for the first time, you will no doubt feel like you’ve already seen it. But when it first came out, it shocked a lot of folks, and for good reason. It’s another in a long line of gritty 1970’s horror that dropped the audience into a completely new and unknown world and then left them there to fend for themselves. It has that “how much of this is real?” feel to it, both in the animal killings as well as some of the humans that are murdered (a foreshadowing to all of the trouble the director would get into with Cannibal Holocaust and its effects and lack thereof). If you enjoy the cannibal films, or you’re excited for Eli Roth’s upcoming entry into the canon, The Green Inferno, and want to see where he found his inspiration, I highly recommend this film.