Actress Peta Sergeant is best known for her roles in films like The Bet (2006) & Iron Sky (2012). She’s also appeared on TV in shows like The Originals (as Francesca) & Once Upon A Time In Wonderland (as the Jabberwock). She also wrote/directed a well regarded short film in 2010 called Litost. Her latest film appearance is as Nurse Williams in director Mark Hartley’s entertaining revamp of the Ozploitation classic, Patrick (1978) called Patrick: Evil Awakens. I managed to snag her for a few minutes to find out a little bit about her career and her experience working with Sharni Vinson, Rachel Griffiths & Charles Dance on her latest film. 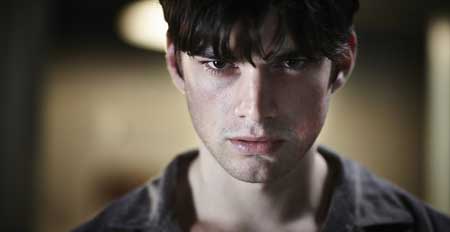 Horrornews.net: Had you seen the original Patrick before starting work on this film?

Peta Sergeant: I did see the original film but not until I was cast in this film, it was a little bit before my time. As soon as I was cast I hunkered down and watched it and it was [Laughing] fun! It’s definitely a product of it’s era and as an Australian I’m a big fan of films like Wake In Fright (1971) and other films of that generation so I watched it with a very generous lens. There’s definitely elements of it, like the effects, that scream THE 70’s but that’s what makes these films endearing. I think the story still holds up and there’s some great performances in there as well. 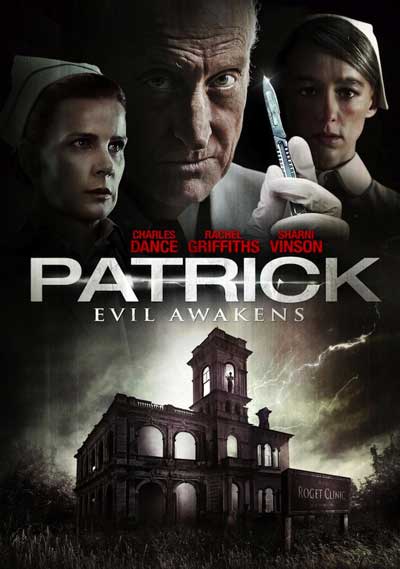 HNN: What was it about Patrick: Evil Awakens that made you want to participate in it?

PS: I was really excited to work with Sharni (Vinson) & Rachel (Griffiths), that was definitely something that was a magnet for me and I also wanted to work with Mark (director Hartley). I had seen his first film Not Quite Hollywood (2008) and we had a few Skype calls during the casting process and I just really loved his enthusiasm. It’s not too often that you get to work with a director that’s also a massive fan and that proved to be a really wonderful quality of his as a director on set, his responses were really very immediate and very true. There’s a sort of purity that happens when you’re working with someone who’s a big fan of genre pictures and who responds to your work so immediately as you’re working on set that’s really refreshing. And since it was his first live action feature film he was just wonderfully loose on set and very respectful of the actors. Prior to production we had been having conversations about how we wanted everything to work and he mentioned that he was casting who he really believed in, people who he felt were going to bring magic to the film and that reminded me of a quote from Hitchcock who said “90% of great directing is casting“. I think Mark really came from that school of thought and that was just beautiful, he was really fun to work with. I think the product speaks for itself, the performances are great, it looks & sounds great and it’s scary!

HNN: We at the Horror News Radio podcast had a lot of fun with the film…

HNN: Quite frankly we were very surprised at how much we enjoyed watching it and you seem to be having a ball as Nurse Williams.

PS: I was! Mark gave me some great notes that sort of sustained me throughout the whole shoot. I was actually living in L.A. at the time and Mark had become familiar with my work through another genre picture I had done the year before called Crawlspace (2012). Mark and Justin Dix (director of Crawlspace) had become friendly and he contacted me through Skype and I had my auditioned taped for him. Now I can’t name the building that I shot it in, maybe because I was there illegally [laughing], but the big question I had with the script was “How has this nurse survived”? The film opens with the death of a nurse and people are dying all around but I seem to be someone who’s part of the furniture! Is that because she’s oblivious? Is she stupid? [laughing], how has she not caught on to what’s going on all around her or has she deliberately turned a blind eye to it all? We weren’t going to specifically answer that question but there’s a lighthouse in the film and Mark told me that “Nurse Williams is like that, she’s like a light“. The film takes place in a very small town and there aren’t that many places to find work, there’s the local pub and there’s the sanitarium. She’s a light but she also keeps to herself, her attitude is whatever goes down, goes down – she doesn’t want to lose this job. The idea of playing her as a kind of light and enjoying whatever attention she gets in the local pub but also enjoying the ability to be anonymous and float down to work in this creepy institution really appealed to me and I had a friend who lived in this amazing turn of the century era building in L.A. that was a large mansion but had been converted into a series of apartments but there were sections of it that hadn’t been touched in ages. I called him because I wanted to tape my audition and I just couldn’t stop thinking of his building! I just really wanted to go in there and have him tape it for me. So we went into the building and we found this great old elevator shaft that goes down to the basement & water damage all over the place, it was super creepy & dark. So we made the audition tape and had a really great time doing it and I think part of that joy was sustained through the whole process and when Mark saw it he said that it was exactly what he was looking for.

I think there was a bit of temptation to go over the top with the portrayal and go the creepy route but particularly once I got to know Aphrodite Kondos (Costume designer on both Patrick films) and she put me in that uniform I just knew exactly who Nurse Williams was immediately. To me Williams was kind of like a sassy 50’s pin up, particularly in that outfit, so I just started watching Lolita (1962) which just happens to be one of my all time favorite films and took a lot of inspiration from both Shelley Winters & Sue Lyon. I also watched All About Eve (1950) and I realized that Williams is a lot like Marilyn Monroe’s character in that film, she’s luminous, delightful, very sexy & oblivious! I think we managed to find the really strong character traits in Williams that answer a lot of the questions that people might have about her.

HNN: The comparison of Williams to a 50’s pin up is something I never thought of while watching the film but it’s very apt, you fit the description exactly. You do have a great figure & you’re a gorgeous woman as well but Williams has an air of ditziness to her, a type of wackiness…

PS: Kookiness! I don’t know if you recall the way that both Sue Lyon & Shelley Winters were playing versions of femme fatales at very different ages, but they also had an internal, innate kookiness in their characters and I’m sure that was part of Kubrick’s selection. The same goes for Marilyn, you don’t know if she’s just oblivious or if she’s just preoccupied with something else but I liked that and wanted to play Williams in that manner. Thanks for noticing that! 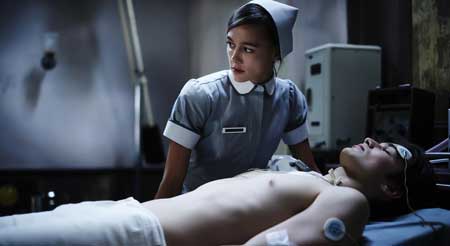 HNN: I also noticed that you’ve done a lot of stage work. Do you prefer working on stage?

PS: I love it all. But I’m such a temperamental creature that every time I work on stage I ache to go back to film and every time I work on film I ache to go back to the stage! When I’m in the theater I love the sense of family that gets created back in the dressing room and everyone is telling funny stories to each other before going out onto the stage and face the audience. It’s very athletic, it’s got that blood, sweat & tears, aggressive, pain sport feeling to it. I love that feeling – it’s wonderful & exhilarating! But I once did a show that ran for over 100 shows and in the middle of that I was aching to be back on a film set! It’s hard to do much during the day when you’re working on stage because you have to hang on to a reserve that you need for what’s going to take place both physically & emotionally at night, like an athlete. When you’re working on a film set you can walk off of it and know that your work is done, it’s in the can and you don’t have to do anymore. In the theater you can have an amazing show one night but you have to hope that you’ll be able to replicate the same performance the following evening, you can’t just walk off the stage and believe that your work is done because you have to do it all again the next evening. But there’s a part of that process that conditions you in a way that working on a film set can’t, every fiber of your being is just living & breathing a character or an idea or a story or a moment and that’s the best kind of training for your instrument as an artist I think. It’s something I want to return to at least once a year, if not more.

HNN: Very well said! Did any of that training come into play when you played the Jabberwock? (Once Upon A Time In Wonderland).

PS: Oh yeah, for sure! The episode just played last week and I was amazed at how much of the physicality they kept in the final edit, I was really pleased. I just went for it which was a lot of fun but I just couldn’t believe how much license they gave me, I was amazed & delighted to be honest! Once I got cast I thought that when I arrived to shoot I’d be told “This is who the Jabberwock is” but they came to me and told me they wanted to know my thoughts on playing the character. There was a certain essence that I had in my audition and that was the one thing they wanted me to keep but they were really interested to see what else I could bring to the character, they left the accent to me as well. I did as much research that I possibly could on the mythology of the Jabberwock and I remember reading about how the creature was a kind of incarnation of a griffin and I liked the idea of applying that type of physicality to my portrayal of the Jabberwock. 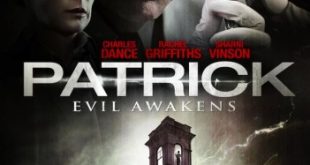 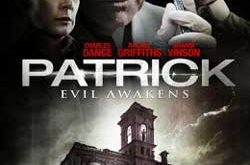 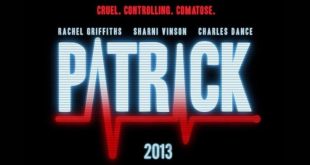 PATRICK Shows Up And Brings Along A Trailer