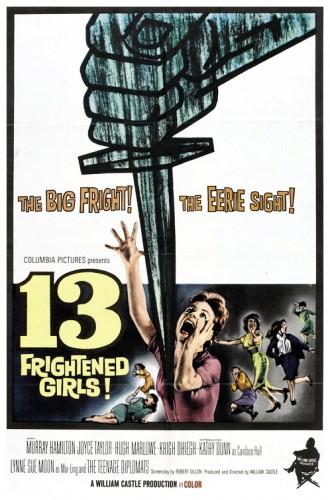 SYNOPSIS:
“Candace Hull, the sixteen-year-old daughter of American diplomat John Hull in London, is a classmate and friend of many other daughters of diplomats from various countries, and gets invited to lots of social affairs. While visiting Mai-Ling, niece of the Red Chinese ambassador she stumbles into a major political secret, involving a murder. Secretly,she passes this information to a CIA agent, Wally Sanders, on whom she has a crush. Candy gets into playing secret agent to the extent of even putting some teen-age seductive moves on the boy friend of her Soviet classmate, but this doesn’t work out well because he is a secret agent.” (courtesy IMDB)

REVIEW:
Orphaned at the age of eleven, future filmmaker William Castle dropped out of high school to work in the theatre. He came to the attention of Columbia Pictures for his talent for marketing and was hired, learning the trade of film-making and eventually becoming a director. He acquired a reputation for churning out competent B-grade movies on-schedule and under-budget. For many years he remained a minor director who did anything that was handed to him but, after his self-produced Macabre (1958) became a hit followed by House On Haunted Hill (1959), there was absolutely no stopping him. Castle moved back to Columbia to make his next series of shockers, the first of which was The Tingler (1959). For this film the director had cinema seats wired to give audiences a buzz, a gimmick he ballyhooed in the film’s advertising as ‘Percepto‘.

For 13 Ghosts (1960) Castle concocted ‘Illusion-O‘ which allowed audiences to see the movie’s otherwise invisible title characters by putting on special glasses supplied at the box-office. For Mr. Sardonicus (1961) Castle appeared at the climax to conduct a ‘Punishment Poll‘ that allowed audiences to vote thumbs-up or thumbs-down on the fate of the villain. For Zotz! (1962), each ticket-buyer was given a replica ‘magic’ coin, and 13 Frightened Girls! (1963) featured a highly-publicised international hunt for a baker’s dozen of the prettiest girls in the world. 13 Frightened Girls! has never attained the cult status that Castle’s horror films have attained, for many a good reason: It lacked an actor with the star power of Vincent Price; It was not written by Castle’s usual scriptwriter Robb White; and, perhaps most importantly, it was not a horror film but more of a Walt Disney-esque family-friendly spy thriller.

“Gidget Versus The Communists” (as one reviewer called it) is a ridiculous film and, while it’s not the best film Castle ever made, it’s certainly one of his most bizarre, in particular the outlandish cold war-era propaganda. Right from the beginning there’s commie ‘humour’ with the Russian and Chinese girls calling each other comrades. At a European school for the daughters of ambassadors and diplomats, Candice ‘Candy’ Hull (Kathy Dunn) is the American among a wide assortment of nationalities. To help her friend (Murray Hamilton) keep his job as a spy, she secretly begins feeding him intelligence. Of course she gets in over her head, and watching her get out of it is all the fun.

The pre-credits sequence doesn’t make much sense and is rather poorly done. The Principal (Norma Varden) of the finishing school allows Candy to drive the bus and naturally things go wrong. What sort of idiot would let an inexperienced sixteen-year-old drive a bus filled with students? To make matters worse, the roads they drive on are obviously in California and not Switzerland as we are told. Then, after the opening credits, the girls have already arrived in London! We find out that Red China apparently kills people and hides the bodies in their embassy’s kitchen, with absolutely no consequences. In fact, despite all the threats, death and illegal action, no one ever seems to hold anyone at fault. In a sense, it turns espionage into a joke – the threat of death is played down, even after a foreign spy is murdered. Candy never fully realises what danger she is in, even when it’s really quite obvious. There are other oddities: There are not thirteen but fifteen girls, none of whom are terribly frightened; at one point sixteen-year-old Candy attempts to seduce an old man; and the colour by Pathécolor can get pretty intense at times.

For a script so naive and innocent, the strong violence that the protagonists suffer is quite surprising, especially for a film so obviously aimed at adolescents. There’s many hints concerning torture by foreign enemies and, despite its message of world peace, there’s a strong sense of xenophobia throughout the film. It may sound like an exciting premise, but it takes forever for the story to seriously start, and there are plenty of breaks in the action along the way. There’s not much for the actors to do, which may explain why most of the thirteen…I mean, fifteen girls are forgotten about for almost the entire film. It’s no wonder that this Castle movie has been mostly forgotten and only just recently been released on DVD.

As I mentioned earlier, Castle launched a worldwide hunt for the prettiest girls from thirteen different countries to cast in the film. Oddly, none of them went on to do anything much in the entertainment industry, with one minor exception: Beautiful blonde Alexandra Bastedo went on to co-star in the cult sixties British television series The Champions, about three government agents blessed with heightened abilities both physical and mental. She eventually appeared in more than fifty films and television shows, the last being Batman Begins (2005) and the soap opera Eastenders before her sad passing just last month on the 12th of January 2014.

William Castle was a showman who is revered more today for the outrageous gimmicks he created to promote his films, than for the quality of the films themselves. He simply loved the show-business of movie-making more than the art, and brought to his work a kind of carnival pitchman’s zeal, which is why he and his films remain in the memory. Had he not passed away of cardiac arrest back in 1977, I have no doubt Castle would have become one of today’s most popular guests of honour at film festivals and conventions everywhere. It’s a role I’m sure he would have enjoyed and would have played it to the hilt, to the immense pleasure of us all. And it’s with that thought in mind I bid you farewell, and please join me again next week as we see what the postman leaves on my doorstep – and sets on fire – in Horror News! Toodles! 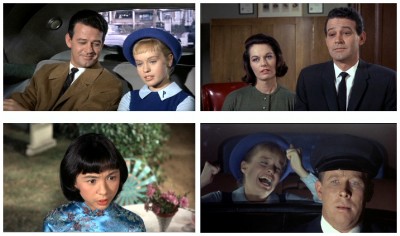