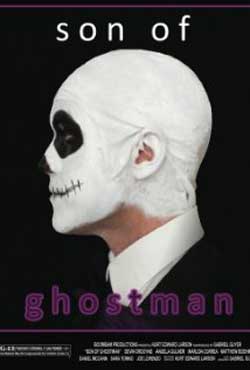 A recently dumped and unemployed man in his 30s decides to moonlight as the ‘son’ of his childhood hero, a bygone local celebrity Horror Host named Ghostman. When his videos go viral, he must settle an old score with a high school rival and figure out where his life is headed, all while keeping his identity secret from a new woman in town he’s fallen for.

I have to admit that when I got a request (from my ever so wicked) editor to watch/review this movie I expected a total disaster. Read the synopsis up above – This isn’t a horror movie, it’s a romantic comedy. Admittedly I’m not exactly a big fan of rom com’s but when the big boss man insists then I must comply. But much to my surprise, Son Of Ghostman turned out to be a really good and entertaining little movie that deserves a wide audience!

What we have here is the story of Denny McNamara (Devin Ordoyne), his girlfriend just walked out on him, he has no job and is about to be evicted from the home he lives in (by his brother)! And to make matters worse his girl has left him for local cable horror host, Count Dracool (writer/director Kurt Larson) and Denny has absolutely no respect for the self serving and pompous count. Dracool has managed to garner the interest of a large cable company that wants to take his show national as well. Life is giving him Denny lemons and sadly he has no idea as to how to turn them into lemonade.

But in a drunken stupor Denny decides he has to make a stand and expose Dracool for the phony he is so he decides to start his own show and post it to the internet. To do this he takes on the persona of “Son Of Ghostman“, the ‘Son’ of Denny’s favorite old school horror host, who has been disrespected & belittled by Dracool. Unfortunately he’s still drunk when he records his first disastrous attempt and ends up passed out on his driveway with his camera sitting alongside of him. 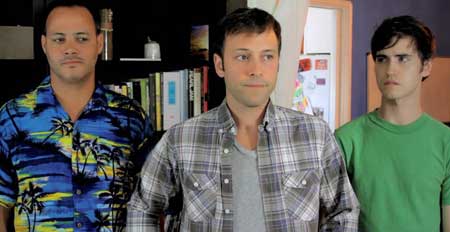 That’s where his neighbor Zack (Matthew Boehm) finds him and decides to take a look at what Denny has recorded. He also surreptitiously takes the tape and uploads it to the internet because he was so entertained by it. And a few short hours (& over 10,000 hits) later…Denny’s hastily recorded mess is a hit! After some back & forth, Denny and Zack decide to team up & along with Denny’s best friend, Carlo (Marlon Correa) embark on a mission to take down the count with the Son Of Ghostman show. Zack is the tech genius, Carlo helps to design/build the small set and Denny makes for a quirkily affable (& extremely amateur) host. Between the three of them the show quickly becomes a big hit! But all isn’t perfect. Zack lives with his aunt Claire (Angela Gulner) who’s just getting over a divorce. Zack also doesn’t like the idea of Denny getting romantically involved with her either and Claire would rather Zack prepare for college (Did I mention that Zack is only 18)? 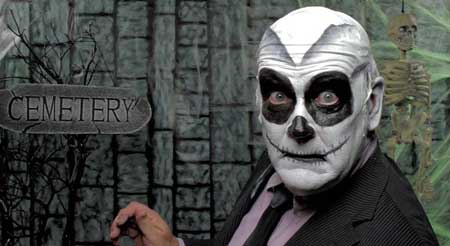 If you’ve ever seen a romantic comedy in your life then you know how all of this is going to work out, writer/director Larson isn’t trying to reinvent the genre here. What’s great about Son Of Ghostman is the earnestness of everyone involved and the gosh darn sweetness of it all. The script plays out logically without any major hiccups that ruin it’s easy going flow and the central idea of having it take place in the world of TV horror hosts is especially different & enjoyably refreshing. The cinematography is clean and crisp, belying the extremely low budget of the proceedings. I did have some issues with the sound mix early on in the film though, it sounds tinny and hollow in the beginning of the film but it does sort itself out after a short while and sounded fine for the duration.

But as great as the script is, nothing would work if the actors didn’t fit into their personas, luckily that’s not the case here as everyone in the cast do an exemplary job. Devin Ordoyne has an extremely affable aura about him that fits his character perfectly and once he dons his Son Of Ghostman makeup, he adds a layer of cool lunacy to it that actually made me wish there really was a Son Of Ghostman show that I could watch!

Angela Gulner is both beautiful and intelligent as Claire and it’s easy to see why Denny would fall for her. Marlon Correa utilizes a deadpan style of acting here that suits his character well. Kurt Larson gives Count Dracool an easy to dislike but hard to hate persona which isn’t an easy thing to do and Matthew Boehm does a good job as Zack as well although I got the sense that he was forcing a few of his lines to where they sounded amateurish at times. Not a deal breaker by any means but noticeable.

Son Of Ghostman looks and sounds a lot like a film that was made in the 80’s but that’s not a bad thing! It evokes a sense of nostalgia that made me smile as I reminisced about that nutty decade and it features a soundtrack that sounds straight out of 80’s flashback show which supplants the goings on perfectly. The script ties up all its knots a little too handily but what’s wrong with that? Quite frankly, it was kinda nice to watch a movie with a happy ending for a change! And to think…there’s no nudity, sex or gore in this movie (my three pre-requisites for a good movie) in Son Of Ghostman yet I just about loved every second of it…