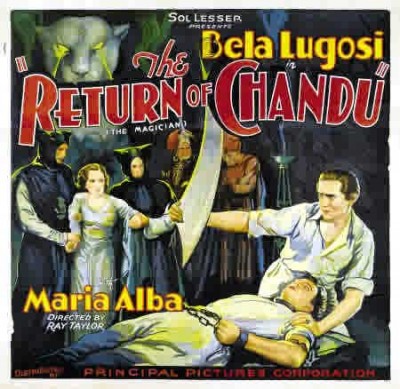 SYNOPSIS:
“The Black Magic cult of Ubasti, based on the isle of Lemuria, believes that Nadji, a princess of Egypt, is a reincarnation of their long-dead goddess, Ossana, and intend to sacrifice Nadji so that Ossana may be resurrected. Nadji has taken refuge at the California home of Frank Chandler, an American raised in the east and possessed of White Magical powers, who calls himself Chandu. Vindhyan, high priest of the cult’s California outpost, learns of this and ultimately succeeds in placing her in a trance which Chandu cannot easily break, propelling him to move her to safety, choosing the port of Suva in the South Seas. There, aided by his sister Dorothy, nephew Bob and niece Betty, Chandu is able to revive her and deal with Vindhyan, only to have the evil Voice of Ubasti, highest of the high priests, spirit her to Lemuria through the magic Circle of Ola. Chandu, Dorothy, Bob and Betty set out in pursuit but end up shipwrecked on Lemuria itself, with his family also now held for sacrifice while Chandu is plunged into the endless maze of caverns beneath the evil Temple of Ubasti, shrouded from his own powers by the full forces of Black Magic.” (courtesy IMDB)

REVIEW:
This week’s chilling presentation, The Return Of Chandu (1934), is a full-length film condensed from a twelve-part serial made in 1934, and is most notable for having a rare heroic and romantic lead for my old friend Bela Lugosi. Yes, that’s right, Bela plays the hero for a welcome change. Let’s see if he can get through an entire film without killing someone – in The Return Of Chandu! Bela Lugosi might be known as Frank Chandler to the general public, but we all know he’s really Chandu, gifted in the mystic arts and a pretty good magician to boot. He’s in love with Nadji, an Egyptian Princess who reciprocates Chandu’s affection. 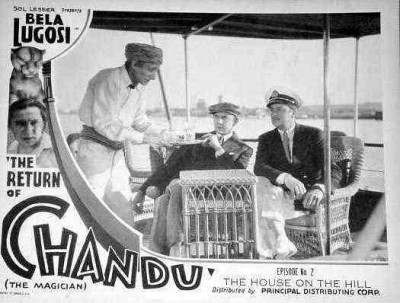 Chandu has to protect the Princess from the agents of the sect of Ubasti, a group of bad magicians who want to sacrifice Nadji to resurrect another Egyptian Princess. Chandu and Nadji travel from California to the high seas and the secret island of Lemuria, struggling against the Ubasti. Chandu’s sister, nephew, and niece also decide to tag along. They’re all rather annoying, especially nephew Bob. Their main function seems to be to get into deadly danger and to be rescued. 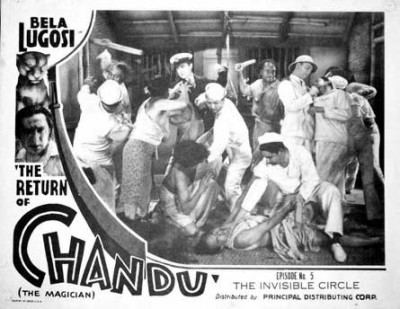 The title music that opens the adventure is rather engaging, and the theme of the Ubasti, a slow drum beat, suits the villains well. The story’s premise allows Bela to show off several of his trademarks, like his hypnotic stare and mysterious hand gestures. Cliff-hanging moments like a poison dart blown toward Chandu and a near-fatal car accident are pretty well-done for the genre. 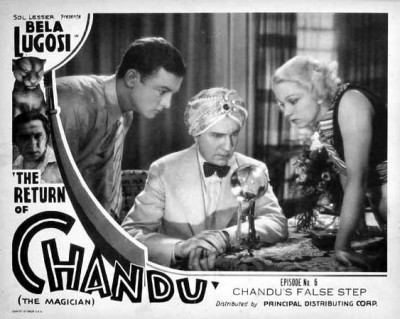 The island of Lemuria, where the Ubasti operate, looks just like the island from King Kong (1933), replete with a large door made of logs that is opened and closed with the strength of numerous natives. We’re also given a couple of nods to Edgar Allan Poe’s Pit And The Pendulum. The Ubasti, like typical James Bond villains, don’t believe in killing someone without using a ridiculously overwrought device. These include such cliched devices as a slowly descending pendulum blade, a slowly descending rock meant to crush its victim, a slowly descending…well, you get the idea.

I can’t imagine watching all 212 minutes of twelve episodes in one sitting due to the serial’s repetitive nature. Every eighteen to twenty minutes, a new episode would begin. This means I’d have to sit through the end credits followed by the beginning credits of the next episode, a written recap of the prior episode, and about a minute or two worth of footage from the end of that preceding episode. This would probably be fine for an audience viewing the serial in weekly installments, but it doesn’t work well when viewed one after another. I’m not criticising the serial itself, I just think Bela Lugosi fans would be better served seeing The Return Of Chandu in the condensed movie length form.

Okay, so the dialogue can be hard to make out when characters seem to be distant, perhaps out of the microphone’s immediate reach, or a lot of extraneous sound like rushing water in the background. Still, on the whole, this is certainly an acceptable presentation of material that is seventy years old and in the public domain. I certainly hope I looked that good when I was that age!

Like the Poverty Row horror films that would soon follow, Bela Lugosi manages to elevate The Return of Chandu above its low budget underpinnings, especially since he’s given the opportunity to play the hero here. Anyway, please join me next week when I will take you even closer to the event horizon of the insatiable black hole that is…Horror News! Toodles!