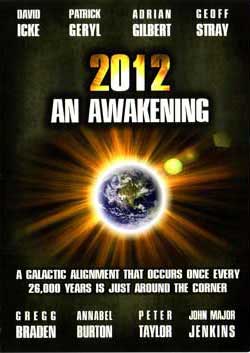 The year 2012 is predicted to be one of great change in cultures spanning the globe. A 26,000 year alignment will occur on the 21 December 2012, will it be the end of the world or the end of time as we know it?

We are living in a very unique time. Scientists and researchers of various levels seem to be coming forward with an almost prophetic vision of a world change that could and almost certainly will induce a new era into our current state of living. “2012, an Awakening” is a proactive call to document and discuss these issues. Should it be taken lightly and should it be gambled with? That’s the biggest question we are faced with today. In this documentary, we get the wisdom and advice from several who have their own views and opinions on what lies ahead. A sun growing with solar flares that contains all that is needed to wipe out our electric grid. A paradigm shift that in inevitable. A galactic alignment that occurs every 26,000 years that was prophesized by the Mayans as a forewarning into things to come.

Geryll says that the universe is accelerating and that the Mayans had the future dead on based on their advanced talent of studying the stars, nature and the movements of the galaxy.

Others point to the global warming as only being a deterrent to the idea that things are warming up not only on our planet but in the galaxy as well. Oceans rising, increased weather activity, massive floods and tales of past occurences that happened in ages before that will happen again. Egypt, what is its mystery that we aren’t being informed about. Does it contain answers from the past about how the earth was and what occurrences happened that destroyed it? Have the former cultures laid out clues and prophecies about the nature of our planet. These and several other theories are all laid out as a foreshadowing we are being denied on many levels to maintain a state of order. Though with the increase in books and shows on the impending state of things, the information is being released in bits and pieces. We’ve heard alot of it before…magnetic fields, a consensual reality, a study of Mayan wisdom….and yet no action is being taken. 2012 An Awakening is another tool to get the information to better understanding about future events. Quite a few familiar names appear on here from resident experts in the subject that give us their personal views and explanations.

While the DVD does feature some great wisdom and intriguing experts about things to come there occasionally is the new ager that I felt was just talking to hear himself talk. I won’t go into names but some conversations seemed rooted less on fact and more on personal perspectives based on loose pieces fueled together to a almost redundant self absorption. Luckily though, there is plenty of smart researchers interviewed that break down the 262 day calendar and the complex numerology spoken about. Age of Aquarius, a global equal…is it just over the close horizon? Disaster or nirvana, what does that mean with these changes and how will we perceive the upcoming events into our own existence? What is the new age conscienceness that they are all speaking of? Should we be building pyramids ourselves or maybe question why they were created to begin with? All this and more to question our history come in the form of this special look at 2012.