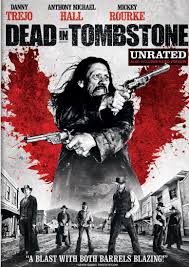 A gang overruns a small mining town murdering their own leader Guerrero (Trejo) in a cold-blooded power grab. Sentenced to eternity in hell he finds himself confronted by Satan himself (Rourke), offering a daring proposition: deliver the six souls of his former gang and he will escape damnation. With time running out, he sets out on a brutal rampage to avenge his own death.

Over the last few years, director Roel Reine has become quite the go to guy when it comes to DTV action sequels. He’s directed sequels to 12 Rounds, The Marine, Death Race (2 & 3), and the third entry in The Scorpion King saga. These films have in many cases been better than the originals, most notably his Death Race pictures. Over the course of these films, he has grown as a director and has become one of the best working in the DTV action arena today. With Dead in Tombstone, he’s made a film which is successful on every front. It’s successful as a supernatural thriller, action flick, and a western. Roel also is one of the few directors who knows how to give Danny Trejo the spotlight. As much as I liked Machete Kills, his performance in this is much more in tone with what I have been hoping to see from him in a lead role. The praise doesn’t end there even though the story has been done to death. 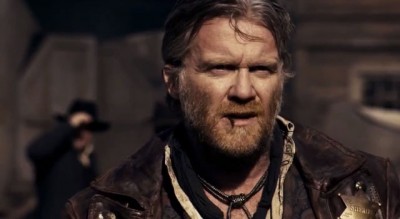 Guerrero (Danny Trejo) and his gang of bandits travel from town to town in the old west stealing whatever they want. He has a code and doesn’t want to kill anyone unless he has to. His half-brother Red (Anthony Michael Hall) has an inside tip on a huge payday for their gang. They head off to the small town and bullets fly. Red decides he wants to take over the entire town and doesn’t think twice to take out his own half-brother. The rest of the gang sides with Red and they gun Guerrero down. A year passes and Red has taken over the town with the rest of his gang. Guerrero wakes up in hell, being tortured by Lucifer (Mickey Rourke) himself. He pleads for his life and tries to make a deal with the devil. In exchange for his own soul, he offers the devil the six souls of the men who killed him. Lucifer goes along with the deal, but he only has 24hrs and they all must die by his hands. He is thrust back to life and with the help of the sheriff’s widow Calathea (Dina Meyer), he begins to hunt the gang down one by one. 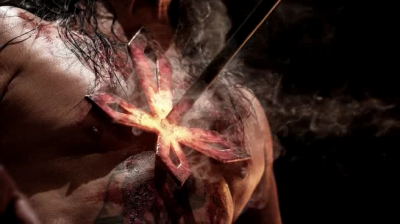 Technically speaking, Dead in Tombstone looks fantastic. The editing is tight and the music is fitting. There are some gorgeous shots that capture the old west in a flattering light. Romania is the perfect stand in for the old west. The film really shines when it gets into the action. Bullets fly from the opening frames and almost never stop. The action is stylish and bloody but the key ingredient to the success of the action is Trejo who is just completely badass every moment he’s on screen. Anthony Michael Hall for most of his career has been known for that nerdy charm he so skillfully delivered in the films of John Hughes. Here, there are no traces of that persona and is the perfect villain for Trejo to face off against. The film wouldn’t be complete without some random weirdness and it arrives in the form of Mickey Rourke. This is a far cry from his performance in The Wrestler but he is nonetheless engaging as the devil. 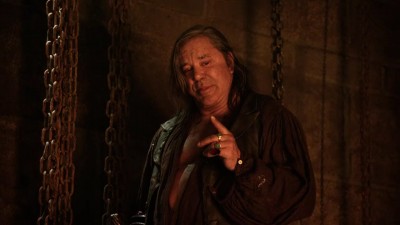 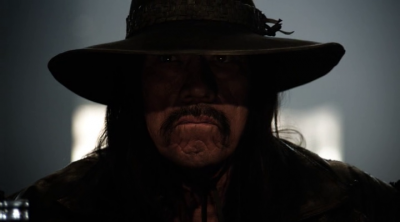 So the film really isn’t anything other than a clone of The Crow. The story never offers up any surprises but it delivers everything it should so who cares. The film is fun, exciting, and always badass. The acting is great and the picture looks much better than many mainstream theatrical releases. The film is left open ended leaving room for a potential sequel, or even series of films. Hopefully Dead in Tombstone will be successful enough to warrant it. I for one would love to see Trejo kicking more ass in the old wild west. This is without question a ***** (out of 5) flick for Trejo and action fans alike.