The Harley-Davidson Street™ 750, revealed last week at EICMA, the International Motorcycle Exhibition in Milan, is built for urban environments (like those featured in Marvel’s “Captain America: The Winter Soldier”) with an all-new Revolution X™ powertrain, nimble agility and the sound and look that lets everyone know it’s a Harley-Davidson® motorcycle. It is the newest Dark Custom™ motorcycle designed for young urban riders around the world.

Earlier this summer, fans at San Diego Comic-Con were shown Steve Rogers’ choice of bike in this movie– the Harley-Davidson® Breakout® motorcycle. So fans will not only see the Street 750 motorcycle in the film, but the Breakout® will also make an appearance as the daily-rider bike of Rogers, aka Captain America.

“Captain America truly embodies the iconic, heroic, and American aspects of the Harley-Davidson brand. Both Captain America and our motorcycles are great symbols of freedom,” added Bernacchi. “We can’t wait for fans to see this movie and what Harley-Davidson has planned with Marvel moving forward. There are exciting things to come with our partnership.”

After the cataclysmic events in New York with The Avengers, Marvel’s “Captain America: The Winter Soldier” finds Steve Rogers, aka Captain America, living quietly in Washington, D.C. and trying to adjust to the modern world. But when a S.H.I.E.L.D. colleague comes under attack, Steve becomes embroiled in a web of intrigue that threatens to put the world at risk. Joining forces with the Black Widow, Captain America struggles to expose the ever-widening conspiracy while fighting off professional assassins sent to silence him at every turn. When the full scope of the villainous plot is revealed, Captain America and the Black Widow enlist the help of a new ally, the Falcon. However, they soon find themselves up against an unexpected and formidable enemy—the Winter Soldier.

Marvel Entertainment, LLC, a wholly-owned subsidiary of The Walt Disney Company, is one of the world’s most prominent character-based entertainment companies, built on a proven library of more than 8,000 characters featured in a variety of media over seventy years. Marvel utilizes its character franchises in entertainment, licensing and publishing. For more information, visit marvel.com. 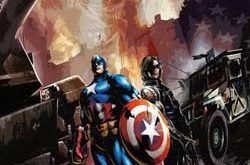