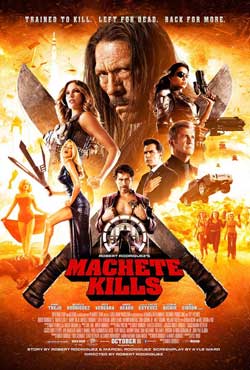 The U.S. government recruits Machete to battle his way through Mexico in order to take down an arms dealer who looks to launch a weapon into space.

At the end of 2010’s Machete, director Robert Rodriguez promised a sequel featuring the return of his mono syllabic anti hero and despite so-so box office returns he’s fulfilled that promise with Machete Kills, which features a ton of good actors having fun playing dress up & shooting each other but not much else. 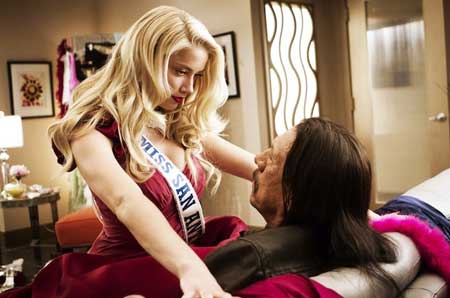 The (unnecessarily) convoluted plot concerns a madman named Voz (Mel Gibson) who’s planning to destroy the earth & repopulate it with a group of select humans that he plans to keep safe in his already orbiting space station with him as the leader of earth when they return. Now that really doesn’t sound too complicated but when you throw in (DEEP BREATH) a Mexican madman with multiple personality disorder (Demian Bechir), a professional hitman (El Camaleón) who literally changes his (or is it her?) face every 10 minutes or so (Walter Goggins, Cuba Gooding Jr, Lady GaGa & Antonio Banderas take turns in this role), a sadistic brothel owner who has some serious daddy issues & machine gun mammaries (Sofia Vergara), a fellow agent who isn’t all she seems to be (Amber Heard) AND a slightly dippy President Of The United States that gets the whole ball rolling by ordering Machete to take on this nutsy escapade with the promise of citizenship upon its completion (Charlie Sheen AKA Carlos Estevez)….well then you have a big sloppy mess of a script. 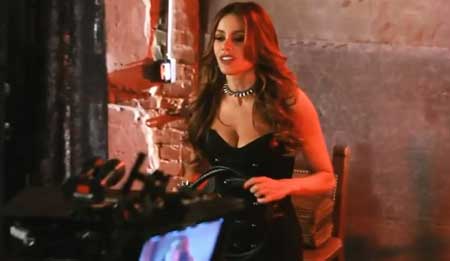 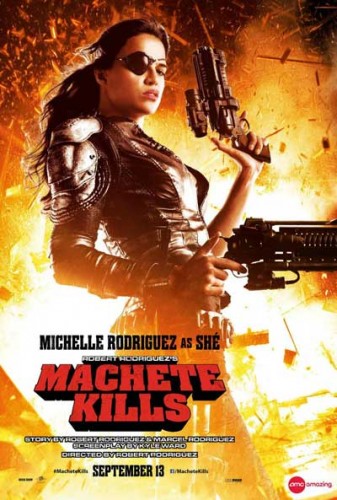 I didn’t even mention the return of Michelle Rodriguez, Tom Savini and Jessica Alba returning in the roles they originated in the first Machete film! There’s a whole lot of plot going on in this movie but nearly all of it is as disposable as the peel off faces that El Camaleón uses. I understand Rodriguez’ desire to emulate grindhouse films of the 70’s but it seems like he worships them a bit too much as he crams plot devices & lines from films as varied as Moonraker(1979), Buck Rogers In The 25th Century(1979), Star Wars(1977), The Empire Strikes Back(1980), Beneath The Planet Of The Apes(1970) & From Dusk Till Dawn(1996) into Machete Kills. In fact, there are so many bits & pieces of other films in here it became something of a game to see how many of them I’d catch (I’m sure I missed a few though). But sadly, all this does is make what should be a pretty straightforward story into a really wretched & complicated one.

That being said, the performances are all first rate! It’s obvious that all involved understood that they weren’t remaking The Godfather(1972) and chose to just have fun with this nutsy movie. Danny Trejo was born to play this role and I think it’s pretty cool that he’s gotten this opportunity. Vergara is way over the top (& her bit about chewing her father’s balls off felt a little creepy) but she’s enjoyably loopy as is everyone else but special mention has to be made of Bechir & Gibson and their performances. Gibson totally gets that his role is so ridiculous that the only way to play it is completely straight and in doing so he makes Voz an epic villain worthy of a Bond film. Bechir has a tougher job since he essentially plays two characters but he straight up steals the entire movie and the voice he uses when he switches characters is a combination of Tony Montana (Al Pacino) & Cheech Marin that is hilariously manic, as is his performance. He starts chewing up scenery as soon as he’s introduced and gleefully gobbles everything (& everyone) around him with reckless abandon.

Machete Kills doesn’t skimp on the violence either, it’s an especially gory film with limbs being tossed about left and right (In fact, 6 heads go flying off of their necks in the first 3 minutes of the film)! My favorite method of dispatch is a gun that turns it’s target inside out though, it leaves a wonderfully gruesome mess in its wake. In addition, eyes are poked out, bodies are flung into helicopter & speedboat propellers, faces are incinerated a/o shot off & crotches get punched dead center! Say what you will about the childishness of it all but Rodriguez is clearly having a lot of fun eviscerating the majority of his cast. There’s even some first rate martial arts action from actor/stuntman Marko Zaror who’s makes the most of his limited time on screen with his intimidating glare and furious kicks. There’s also a really cool opening credit sequence that looks like what the result of what a 007 credit sequence would look like if it were crafted by Andy Warhol & Jackson Pollock! 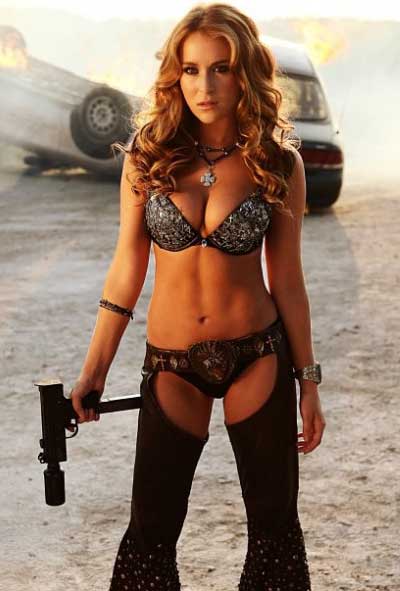 Before the beginning of Machete Kills we get a trailer for the proposed sequel (Machete Kills…In Space!) and Rodriguez was wise enough to actually make a connection between this film and it’s yet to be made sequel. And for the record, MKIS looks like it’ll be a lot of fun but in all honesty it also looks like it’s gonna be even more convoluted than this film is. As much fun as Machete Kills is, it still fairly withers on the vine because of its unnecessary plot machinations and I can actually understand if some patrons get confused if they take their eyes off of the screen for a few minutes. And that’s ridiculous! It’s Machete Kills for Christ’s sake not Inception!

So while I did enjoy Machete Kills enough to recommend it, caution is warranted because it does get bogged down under the weight of its ridiculously complicated plot at times. If you enjoyed the first Machete film then you’ll enjoy this one as well but there’s something missing here, as much fun as the actors seem to be having it felt fairly stilted to me at times. Not stilted enough to make it a bad film but enough to make you look at your watch every so often and wonder if it’s all gonna be over soon. Still, I believe that you’ll have a good time here if you keep your expectations really low and load up on some sugary snacks beforehand…just in case.