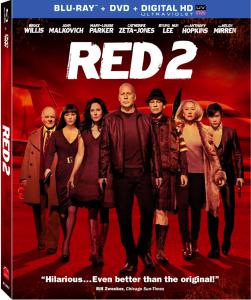 Frank Moses (Bruce Willis), deemed RED (Retired Extremely Dangerous) by the C.I.A., meanders through his civilian life with his girlfriend Sarah Ross (Mary-Louise Parker) in tow. His best friend, Marvin Boggs (John Malkovich) tries to rescue him (and Sarah) from their increasingly mundane life urging Frank repeatedly to return to the exciting life of a hired hit-man. When Frank and Marvin are named in a leaked document stating their involvement in a secret covert operation code-named, Operation Nightshade, their lives are back in jeopardy with every secret agency out to ice the pair. Frank, Marvin and Sarah must locate Nightshade and clear their name before any number of assassins do them in, including their one-time ally, British agent Victoria Winters (Helen Mirren).

The most curious thing about Red 2 is how Helen Mirren and Anthony Hopkins steal the show from stars Bruce Willis, John Malkovich and Mary-Louise Parker. Red 2 is an entertaining yarn that never reaches for more than it has to be. It never bothers to offer anything to get the audience up to speed on its predecessor nor bothers to up the ante in the action and comedy established in Red. Director Dean Parisot displays glimpses of brilliant action direction and handles a number intimate scenes with finesse and subtlety. Then, there is the rest of the film, which is often tired and sluggish. Things happen but there is very little heart or motivation for much of it for the audience to connect to. A big part is the problem is that Mary-Louise Parker’s Sarah Ross gets lost in the shuffle and John Malkovich’s Marvin is strangely and disappointingly restrained. The plot is thin as well, full of holes and missed opportunities, relying too heavily on a line gag about “didn’t see that coming.” Wait. It’s a spy movie and you didn’t see the double crosses coming? Uh, spy movie. Much like the reaction to that line, the cast stumbles around with the shoulders drooped, totally uninspired. 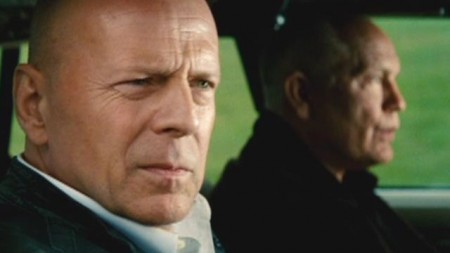 The plot of Red 2 follows a James Bond/Mission Impossible influenced clear-your-name story-line where Frank and Marvin are named in a leaked official document about Operation Nightshade. This sets off a number of top level officials to place a mark on the pair of retired secret agents. But not as many as you would think. In the UK, we have the boys’ liaison, Victoria Winters given the contract. She immediately tips the heroes off to the hit including that the US officials have hired Han Jo-Bae. Han is one of Frank’s protegees who just happens to have a beef with the old man. The race is on. Frank and Marvin are led to a secret holding facility by a French informant named “The Frog” – who coughs up the guarded facts thanks to Sarah, Frank’s current girlfriend, and Katya, a Russian spy and Frank’s former flame. Behind the locked doors, they find Dr. Edward Bailey, the inventor and creator of Nightshade, long thought dead but surprisingly still alive. Much like the Bond films, the script has the crew hopping from Paris to London to Moscow with elaborate stunt-filled chases and fast-paced hand-to-hand fisticuffs. 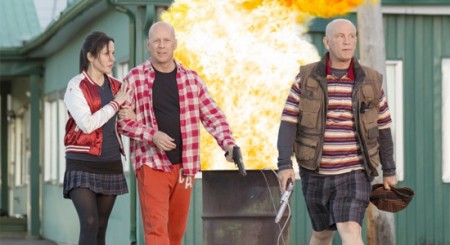 Bruce Willis, John Malkovich and Mary-Louise Parker return as the film’s leads: Frank, Marvin and Sarah. With their cinematic relationships firmly established, the film sets them up with a slightly different dynamic this go around. Frank and Sarah are trying to settle down and fit in. Frank has become very mundane, domesticated, while Sarah is becoming increasingly bored, constantly, quietly nudged Frank to get back into the business. She obvious misses the excitement while Frank is all about keeping Sarah safe. It is a very dull place for these two characters to be. Marvin in inexplicably always nearby, temping the two to return to the biz. These three characters have all become far too ordinary which is contradictory to the point of first film. They can be “normal” in appearance but they are far from it in actuality. Having Willis play it this straight results in a neutering of Frank sucking much of the life from the film. Without the stark contrast between Frank’s over-the-top lifestyle, Sarah’s “normal” character looses all its charm. It’s a snooze-fest. Worse, Marvin’s role is toned down. While still bizarre and outrageous, comparatively, it never approaches the zaniness of the original. He’s become a wacky Miyagi, training Sarah on becoming a ersatz-agent. Boring, they are each trumped by the superior supporting cast. 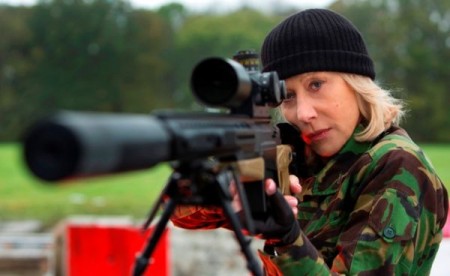 Helen Mirren steals the film from Willis and crew. She is brilliant, beautiful, charming and satiric. Hilarious. She embraces this role with a fierce wit and brash attitude. It is no wonder that Brian Cox’s Ivan Simanov is so enamored with the feisty hit-woman. Her scene having her break into the asylum posing as a mental patient thinking she is the Queen of England is one of the few inspired moments in the otherwise unispired film. Another is her on the hill top sniping away at Frank’s captors with Cox admiring ever moment of it. Their brief hint at a relationship is far more interesting than the petty squabbling Willis and Parker are left to dish out. Continuing the examples of Mirren’s greatness, she easily tops Catherine Zeta-Jones in the sexy department, and, in the ruthless department. Another of Mirren’s best scenes is with Lee Byung-hun as Han as they drive after the escaping villains. In the film’s best action sequence, the two of them drop their best Bond impressions, smashing through police cars, performing chase-movie acrobatics and ending with Mirren pointing her pistols out both windows as the car spins around to each target. She never misses. As stated earlier, Mirren is brilliant.

Anthony Hopkins is Mirren’s sole competition in the scene stealing department. He stars as the long incarcerated scientist, Anthony Hopkins. He plays the character with a manic wit and a kinetic dismay. He is a hundred red herrings bundled up into a tightly twisted spring. His charm and charisma allows him to earn the trust of Frank and Marvin, and the audience, giving his ultimate turn a brief “whoa” moment in the film. Then he shifts into a parody of Dr. No or Goldfinger and runs that conceit into the ground with dizzying speed. At least it is a fun and entertaining descent, despite it being a tired trope. Besides Hopkins, Neal McDonough is the film’s other major bad guy as Jack Horton, a secret agent in the U.S., some agency, somewhere. He is a fairly influential and connected character, that he is able to snuff out a General in the Pentagon with no repercussions what so ever. McDonough is effectively stoic and intimidating with his imposing stature and piercing blue eyes. His early scenes commanding a group of agents against Frank, as the hero attempts to escape capture, sending them in one by one only to be equally astonished and frustrated at the results is an early highlight in the film. Unfortunately, the script does not know what to do with the character in the third act making his role pointless by the film’s conclusion.

Director Dean (Galaxy Quest) Parisot steps in for Robert Schwentke to helm the sequel. He does an admirable job keeping the pace quick and the action tight. He excels in the chase scenes with Mirren and Byung-hun. Parisot is more at home with Byung-hun’s fight scenes than he is with the more quiet moments such as Frank and Sarah shopping at the Cost-Co. Fist fights and slow motion give the director brief moments to shine. His camera also adores the female cast providing Mirren, Parker and Zeta-Jones many opportunities to outshine their male counterparts. They are the true heroes displaying brains, charm, determination and sacrifice. Boom. Willis and the guys have nothing on these gals.

Red 2 is a fun, but adequate, action spy-film. It does what it needs to do to get the job done, much like a hit-man: aim for the target, fire and done. It is entertaining, effective, but not engaging. The script cuts the main characters off at the knees with the goal of re-establishing their appeal and charm as the film progresses, but has trouble accomplishing that task. It seems to favor the supporting cast instead. It is a real problem when following Frank, Marvin and Sarah is far less interesting than the interaction between Mirren and Cox on a hill-side or Mirren (again) with Byung-hun racing through the city streets exacting carnage and mayhem. The leads get left behind emotionally and visually making the film only moderately compelling. There is more than enough in the film to enjoy, the supporting cast (Mirren, Cox and Hopkins), the well staged action and the zany, if predictable, plot twists, but the film never reaches beyond its grasp to stretch its legs or imagination. Red 2 is a modest action comedy, see it for Helen Mirren and Anthony Hopkins, if at all.

Red 2 (2013) is now available on bluray per Summit Entertainment