Film Review: The Hound Of The Baskervilles (1939) 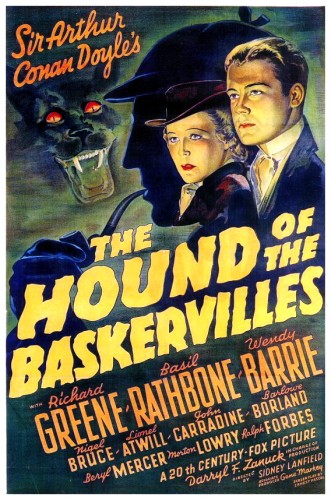 SYNOPSIS:
“Sherlock Holmes is approached by Doctor Mortimer to assist in protecting the life of his best friend’s nephew who is that very day returning to England from Canada. Mortimer’s friend, Sir Charles Baskerville, recently died and although the coroner ruled it to be a natural death, the Doctor knows he was being chased by a legendary dog, the Hound of the Baskervilles, that has plagued the Baskerville family for years. Sir Henry Baskerville is Sir Charles’ heir and Mortimer is convinced that he will not last long living on moors at Baskerville Hall. Already Sir Henry is facing odd happenings when a single boot is stolen at his hotel. Holmes dispatches his good friend Doctor Watson to accompany the young man to the family estate while he attends to other matters in London. Once there, Sir Henry meets the lovely Beryl Stapleton and her brother John. The servants are acting strangely and when Watson catches one of them signaling to someone on the moor, he thinks he knows who might be involved. Holmes, who has been masquerading as a tramp, has his own ideas however and the solution to the mystery lies in the Baskerville family history.” (courtesy IMDB)

REVIEW:
“His very person and appearance were such as to strike the attention of the most casual observer. In height he was rather over six feet, and so excessively lean that he seemed to be considerably taller. His eyes were sharp and piercing and his thin hawk-like nose gave his whole expression an air of alertness and decision. His chin, too, had the prominence and squareness which mark the man of determination.” (A Study In Scarlet by Sir Arthur Conan Doyle). This then is the Sherlock Holmes of the author’s imagination. The very stylisation of this portrait draws our attention to the essential qualities of the consulting detective – his energy and the acuteness of his senses. But this certainly left something to the imagination of his illustrator Sidney Paget who used his brother Walter Paget as the model for Holmes, and it was from Paget’s drawings that the definitive image of Holmes emerged. The actor who has come nearest to creating the definitive Holmes on screen is Basil Rathbone, and it was he who donned the deerstalker for the 20th Century Fox version of The Hound Of The Baskervilles (1939).

It all started at a Hollywood party. Darryl Zanuck, Gregory Ratoff, Gene Marker and I were discussing new properties to screen when Zanuck said, “Somebody should do these damned Sherlock Holmes stories.” Ratoff asked, “Who would you get to play Holmes?” to which I replied, “Who else but Basil Rathbone!” Within months of our conversation, Rathbone was introduced to both radio listeners and moviegoers as Sherlock Holmes. The casting cannot be considered anything other than inspired. Rathbone presented an ideal picture of Holmes. He was tall, carrying himself with an erect guardsman-like bearing with an extraordinarily angular face, long aquiline nose and defiant jawline. His voice was sharp and incisive, yet dark with a majestic quality betraying his stage training. He portrayed Holmes as an alert, energetic, capricious and sardonic animal. Rathbone played with great style and authority, it was a part for which he obviously had a great deal of affection, and it showed. The Rathbone Holmes found immediate acceptance with the public (though not always with critics) resulting in over two hundred broadcasts and more than a dozen films.

The detective genre, which had fallen into a rut of formula B-grade movies by 1939, could not have had a more stylish and impressive showcase than The Hound Of The Baskervilles, the first Rathbone/Holmes vehicle which initiated the equally inspired casting of Nigel Bruce as Doctor Watson. Bruce’s characterisation, which bore little relation to the Watson of the Conan Doyle stories, was pretty much the same silly-arsed Englishman he played in countless other films, nevertheless it was an act of great charm and turned Watson into an endearingly avuncular figure. Probably the best film version of The Hound Of The Baskervilles, it remains an impressive handsomely mounted and certainly respectful treatment of the novel, even if it is a little too measured in its pacing and never quite makes the most of its potential. Ernest Pascal‘s literate script keeps quite close to the original novel and where innovations have been made, they are pertinent and effective. For example the seance where Mrs Mortimer (Beryl Mercer) in a trance-like state attempts to contact the dead spirit of Sir Charles Baskerville (Ian Maclaren): “What happened that night on the moor, Sir Charles?” she asks. The only reply is the low eerie howl of a hound far out on the moors.

There is some fine dialogue too. When Watson asks what’s going on, the detective replies, “Murder, my dear Watson, refined cold-blooded murder. There’s no doubt about it in my mind, or perhaps I should say in my imagination, for that’s where crimes are conceived and where they’re solved – in the imagination.” When Watson says there’s been no murder, that Sir Charles died from heart failure, Holmes replies, “That’s why so many murders remain unsolved, Watson, people will stick to facts, even though they prove nothing. Now if we go beyond the facts and use our imagination as the criminal does, imagine what might have happened and act upon it as I’ve been trying to do in this case, we usually find ourselves justified.” Doctor Mortimer is presented as a sinister figure with thick spectacles and a black beard, giving Lionel Atwill a marvelous red-herring role, much favoured with low-key close-ups. The villain’s wife in the novel becomes his sister, presumably in order to make her a more acceptable romantic partner for Sir Henry Baskerville, played by Richard Greene, who incidentally received top billing above both Rathbone and Bruce.

Others in the impressive almost all-British cast include John Carradine as the butler Barryman and Mary Gordon as Mrs Hudson, a role she was to repeat in future years. The hound itself is shown without any spectral phosphorus adornment and the emphasis is put on the fact that it is a real ferocious dog – the result is genuinely frightening. The legend of the Baskervilles, told in flashback at the beginning of the movie, shows the hound attacking Sir Hugo Baskerville (Ralph Forbes) at the throat. The scene, set on the moor and shown in silhouette, is very effective indeed. Director Sidney Lanfield, usually at home with light comedies, made fine use of shadows and the impressive Gothic mist-enshrouded moor sets which were enhanced by the barely perceptible use of gauze of the lens.

The most surprising aspect of the movie is the lack of background music, which would have greatly added to the atmosphere of such scenes as the one near the end of the film where Holmes is tracking down the murderer across the dark misty moor. The reason not to use suitable background music appears to be a mystery in itself. Rathbone was never better as Holmes. He kept his interpretation under firm control and presented the detective as a cool calm reasoner with definite bohemian traits. There was a total lack of the smugness which dogged previous Holmes actors and, later, his own. Even when he appeared in disguise as an old pedlar, he kept the characterisation well within the bounds of reality. Holmes’ deductions are pertinent and have an air of credibility, and he doesn’t resort to ‘the needle’ for inspiration during the action. In fact, the only reference to it comes in the final line of the film, after announcing himself fatigued by his exertion, Holmes calls back to his associate, “Watson, the needle!” The good doctor picks up his medical bag and follows him off-screen.

The film was an immediate success. “The Americans have done right by Conan Doyle!” was one British critic’s view, while the Kinematograph Weekly magazine commented, “It is a grand Sherlock Holmes.” What seemed to please and impress most people was the authenticity of the film, which seemed a pleasant change after more contemporary interpretations. Graham Greene in The Spectator wrote, “In this new film Holmes is undoubtedly Holmes, and he hasn’t to compete desperately with telephones and high-speed cards and 1939: ‘Your hat and boots, Watson, quick, not a moment to lose!’ He rushed into his room in his dressing gown and was back in a few seconds in a frock coat. The atmosphere of unmechanical Edwardian flurry is well caught – the villain bowls recklessly along Baker Street in a hansom and our hero discusses plans for action in a four-wheeler.”

It is amusing to relate how The Motion Picture Herald saw the film’s selling points: “The obvious exploitation cue is for a strong campaign addressed to the millions who have read the book, and such other millions who have not got round to reading it but have meant to for some time and now, under the circumstances, needn’t.” For whatever motive the millions had for going to see The Hound Of The Baskervilles, see it they did, making it one of the most successful films released in 1939. The film was also a triumph for Basil Rathbone. “He is the ideal selection for Holmes!” commented one critic and, although not all critics were convinced of this, the public were unanimous in applauding the Rathbone interpretation. Because of the film’s success, 20th Century Fox hurried a sequel into production, The Adventures Of Sherlock Holmes (1939), but that’s another story for another time. Right now I’ll ask you to please join me next week when I have the opportunity to sterilise you with fear during more terror-filled excursions to the dark side of Hollywoodland for…Horror News! Toodles!