Returning to his home in Colby, Texas, lawyer John Reid comes face to face with outlaw Butch Cavendish who all but destroys everything he holds dear when the Cavendish Gang ambushes a posse of Texas Rangers. The attack results in the death of John’s brother Dan and the other Rangers while the recently deputized John Reid survives with the help of Tonto and a mystical white horse. Tonto convinces Reid to join him in bringing Cavendish to justice by wearing a domino mask to conceal his identity – to become the Western hero known as The Lone Ranger.

While director Gore Verbinksi (The Ring, Pirates of the Caribbean) tries desperately to reanimated the long-dormant franchise, The Lone Ranger, he ultimately ends up taking a cinematic dump on the once-cherished story of the masked Western hero and his side-kick, Tonto. The script by Justin Haythe, Ted Elliott and Terry Rossio results in a hollow interpretation of the source material shifting focus onto Tonto (likely due to the star power of Depp) unable to handle the straight-laced heroism that embodies John Reid and the Lone Ranger. The film’s plot is muddled, ugly and misguided with the material surrounding the comedic attempts far too dark and deleterious by comparison, making the two-plus hours unbalanced, confusing and, worse of all, boring. Johnny Depp gives the film an embarrassing and shtick-filled, boarder-line offensive performance as Tonto. It is a credit to Depp’s charisma and talent that his caricature of the role is not drawing far more negative reaction. Armie Hammer is nearly lost in the role as John Reid lacking the heroic stature, presence and delivery to give the Lone Ranger his needed allure and grace. Instead of confidence, justice and a strict moral code, Hammer’s Lone Ranger is clumsy, awkward and foolish; at least he begins with a moral compass that is admirable if unrealized. Verbinksi’s The Lone Ranger is an strong contender for worst film of the year. 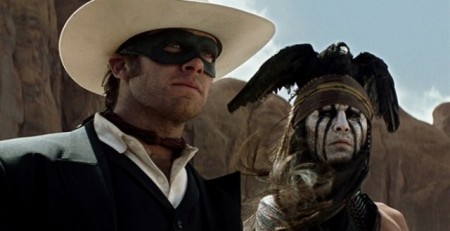 The Lone Ranger shifts much of its focus to Depp’s Tonto with a bookend narrative that resembles Little Big Man as an aged Depp recounts the legend of the Lone Ranger. The old man recounts his tale with a young boy named Will, dressed in a western outfit, who obviously idolizes the Western myth. His story begins as John Reid arrives in Colby, Texas on a train that also carries two prisoners: Tonto and the desperado Butch Cavendish. However, the Cavendish gang rescue their leader and derail the train just outside its destination. John’s brother, Dan, the sheriff of Colby gathers a posse to chase down the outlaws with John at his side. When they are ambushed, John is left in the desert as the sole survivor with Tonto, following the directions of mystical white stallion, healing the near-dead hero. Tonto suggests to John that he is now a Spirit-walker convincing him to wear a mask to disguise who he is. Together they go off to track down Butch Cavendish and uncover the conspiracy that mars the once peaceful town of Colby.

Johnny Depp provides the film with an interesting, and often funny, Tonto; however, the performance and direction is too far removed from what the character is and represents. While the name Tonto is meant to translate to “wild one,” the way Tonto is defined is far closer to the Spanish translation of “foolish” and “silly.” Wearing a dead bird on his head, often sprinkling bird seed around and trading random objects with others, alive and dead (a gag that quickly runs its course), this Tonto is a broken soul – as the script works hard to point out when the Lone Ranger encounters Chief Big Bear. Depp’s Tonto is very familiar, sharing qualities and nuances close to Captain Jack Sparrow, even sharing a talent to using the surroundings to their benefit. As Tonto is being slung around on the the runaway train early in The Lone Ranger, it becomes difficult to separate the visuals from Jack Sparrow’s early battle with Commodore Norringtion and his troops shortly after Sparrow rescues Elizabeth Swann. Even though Tonto is a distant cousin to Jack Sparrow in tone and swagger, the performance remains one of the better things in the film, despite the occasionally insensitive racial stereotype. It also becomes curious how Tonto is often the one who challenges the Lone Ranger’s moral vigor in this rendition, frequently urging the hero to shoot to kill or take a more aggressively violent stand against the villainy they face. The tint of vengeance in the role is uncomfortable, conflicting with much of the source material’s tone.

Armie Hammer’s John Reid struggles to become a hero, at a cost to the character and the film. The role in Verbinksi’s film has no confidence and the arc chosen attempts to illustrate how that poise and fortitude is discovered by Reid as he becomes the Lone Ranger. The paths chosen to do so are clumsy and Hammer’s straight man approach is weak and unheroic. The character speaks of a moral code, but Hammer never gets the opportunity to fully instill that into the role by example or exercise. Instead he covets his husband’s wife, holds contempt against the Apache and shoots to kill even when the Lone Ranger says he does not intend to. He is foolish and uncommitted making for a uninteresting hero. Regrettably, Hammer labors to bring anything charismatic to the role and his chemistry with Depp is forced at best. Tonto and Reid are rarely friends and are at odds as often as they battle side-by-side. Tonto’s constant insistence that fate has chosen the wrong brother is a repetitious undermining of Reid’s attempt at being a hero. It is not until the Hammer’s Reid is atop his horse, Silver, riding atop the Colby roof-line accompanied by Gioachino Rossini’s William Tell Overture chasing after the villains as they make their escape that the familiar Lone Ranger appears on screen. 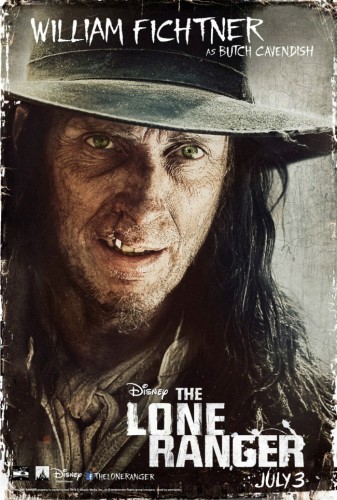 A key outlaw in the origins of the Lone Ranger is Butch Cavendish who is responsible for the death of John’s brother Dan Reid, the uniting of the Lone Ranger and Tonto and, in this version, essential to the motivation and maturing of Tonto as well. William Fichtner is cast as the dastardly devil in disguise. The effective makeup for the role, providing a formidable facial scar, accents Fichtner’s menacing performance. The problem with Verbinski’s version of Cavendish, he is periodically relegated to stooge stripping much of the early threat established in the opening scenes. He becomes a one-note character that gets lost in the third act as the scripts gets more and more convoluted. He has more in common to the wasted Ian McShane’s Blackbeard in Rob Marshall’s On Stranger Tides than Geoffrey Rush’s delicious Captain Barbossa in The Curse of the Black Pearl. With a little more attention paid to the role from the writers, editors and Verbinski, Fichtner’s Cavendish would surely excelled. 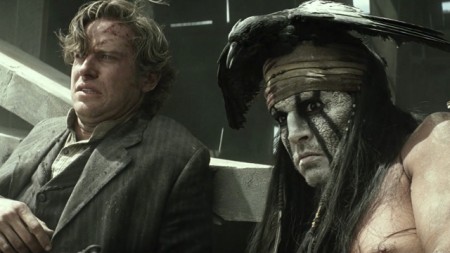 One of the problems that faces The Lone Ranger as it struggles to translate into the Twenty First Century is that times have changed so much since the height of its popularity in the 50’s and 60’s with its popular TV series starring Calyton Moore and Jay Silverheels. Characters like Tonto, Fu Manchu and Charlie Chan are a challenge to essay without slipping into racial stereotypes and offensive slurs and dialog. Even in the original series, Jay Silverheels was opposed to Tonto’s dialog filled with broken English. It is difficult to balance between historic accuracy and Hollywood cinematic versions of the 1800’s. The problem is clearly displayed when Armie Hammer’s John Reid finds himself across from Saginaw Grant’s Chief Big Bear as Reid first tries to communicate in fractured, simplified grammar, followed by a series of silly pantomimes as the Chief stares back not amused. Thankfully, Chief Big Bear speaks up using articulate English. It embarrasses Reid, the film and the audience. It also breaks one of the guiding rules of the Lone Ranger provided by the creators of the franchise, Fran Striker and George W. Trendle, back in the Thirties when it was introduced on the radio. Of all the characters, the Lone Ranger is the one that should never use slang or colloquial phrases, always using precise and perfect grammar. It is as much a part of his tone, morals and stature as the mask, the white hat and the silver bullets. In what can only be a brash attempt in forced character growth in Verbinksi’s The Lone Ranger is a egregious and unforgivable error; the character’s defining morals are never earned nor established.

The Lone Ranger under Gore Verbinski’s supervision is bastardization of the property, never finding its footing on its message, point, tone or moral. The film is clumsy, silly and convoluted. The characters are forced and contrived. It is also far too dark for a Disney film, for a children’s film -with no good reason to go where it travels from time to time (a scene where one of the outlaws encounters the Lone Ranger and Tonto after the plots has the gang decimating a homestead in the guise of Apache ‘savages’ is evidence). It tramples the innocence of youth. It stifles the entertainment and silences the comedy the film strives so hard to present. Even the cinematography has trouble distinguishing the film’s tone with the bare and bright desert coming across dark and foreign. The Lone Ranger represents the worst in Summer blockbuster cinematic mentality where story and purpose are compromised by spectacle and forced dialog and action. Johnny Depp’s whimsical, but misplaced, Tonto and Fichtner’s Butch Cavendish are far too little a contrast to turn this offensive mess into anything resembling palatable. The Lone Ranger is an uncomfortable two-plus hours in the theater only succeeding in beating the summer heat and little else.