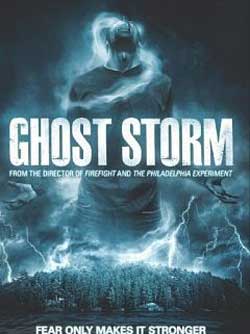 An action packed chase led by Hal and Ashley to save the people on this small island from a strange electrical storm which is led by angry souls from a mass suicide looking for revenge.

Ghost Stormis a made for television horror film from prolific writer and director Paul Ziller. For the most part this type of film is met with derision and immediately negative judgement prior to viewing as television films are generally restricted by budget and also by what they can show. Occasionally an interesting example will sneak through though but is Ghost Storm that film?

At the outset we have four teenagers messing about in a graveyard, as obviously teenagers like to do. Anyway, after playing pranks on each other Daisy (Cindy Busby) beings to tire of the whole thing and wants to leave just as a storm begins to threaten. Almost immediately a lightning bolt strikes a stone memorial and cracks it in two, opening up a fissure in the ground. The memorial in question relates to a tragic event in this small town’s past when a rogue priest led many people in a mass suicide, something that has become a local legend.

Before they leave one of the group Will (Andrew Dunbar) decides to relieve himself on the broken memorial. As he does so a strangely animorphic mist rises from the fissure and attacks, instantly turning him to a flaking, decayed corpse. As the police chief Hal (24’s Carlos Bernard) investigates one of his deputies falls foul of the mist and he must team up with his estranged wife Ashley (Crystal Allen) to fight the aggressive mist which seems intent on sucking the lifeforce from all the town’s inhabitants.

The first thing to say about Ghost Town is that there is a really good idea at its heart. I found the opening act interesting which made me curious how the story would develop. With horror it is incredibly difficult to come with anything new and original so credit must be given where its due. The problem is though that, having got this idea, the story quickly ran out of steam and never delivers on the promise of it’s opening. 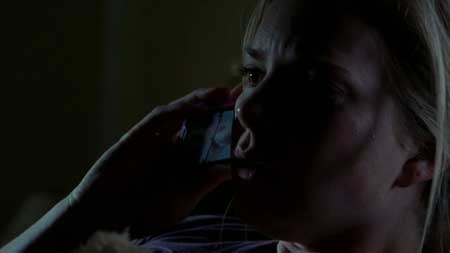 It would be fair to say that on the whole the acting is of a pretty good standard. The majority of the cast are fairly experienced and handle the script reasonably well, even when it slips into cliché and becomes a little preposterous. The direction is passable if somewhat by-the-numbers and it would be churlish to be over critical given the obvious budgetary restraints. The cleverness in the film though is centralised primarily around the special effects. The use of mist as the main aggressor, although lightning and electrical surges play their part, means that the effects while at times become a little shaky are generally believable and realistic. There are even a few reasonable shock moments involving blood although these could easily have been lifted from a different film altogether given that they do not relate to the mist-based attacks. 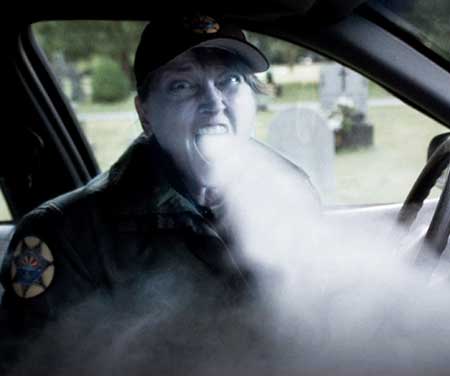 One area that doesn’t really work though is the deaths, and there are a lot of deaths. After the initial attack rendered the victim a dried out corpse all the following townsfolk unlucky enough to be caught by the merciless mist seem to explode on impact in a dusty mess; in one slightly comical scene even leaving behind a pair of shoes under a pile of grey ash. What this does is take away any of the tension and scariness that has been built up and is more akin to a routine actioner than a suspenseful horror film. 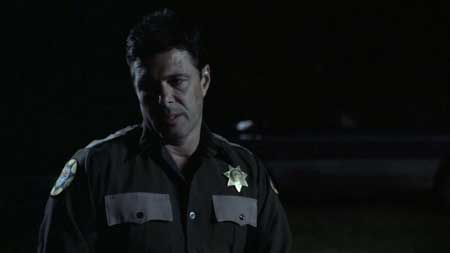 At it’s best Ghost Storm is a reasonable and interesting supernatural horror with decent performances and passable effects that might amuse you from time to time. At worst it is a hokey, cliche-ridden, made for televison, horror-wannabe that offers no scares and is simply a recycled script full of set pieces stolen from films such as The Fog and the Amityville films. I wouldn’t recommend making any special effort to seek out Ghost Storm but it appeared on the television schedule on a rainy day then it is worth a look. 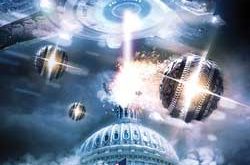