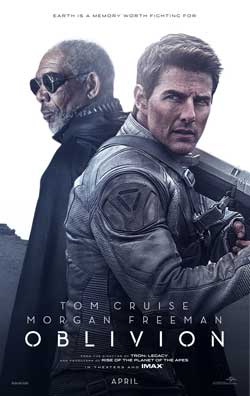 A veteran assigned to extract Earth’s remaining resources begins to question what he knows about his mission and himself.

I dig Sci-Fi films, I really do. I’ve seen good ones, bad ones & all the ones in between. And I was all ready to enjoy “OBLIVION” which was written & directed by Joseph Kosinski (“TRON: LEGACY”) & stars Tom Cruise, I really was. The promos for it looked fantastic with jaw dropping visuals & it (Seemingly) had a lot of action going on as well. But once again I have to shout “SHENANIGANS” at the filmmakers & Paramount pictures for spending upwards of $120 million dollars on what is essentially a two hour plus sleep aid disguised as a film. 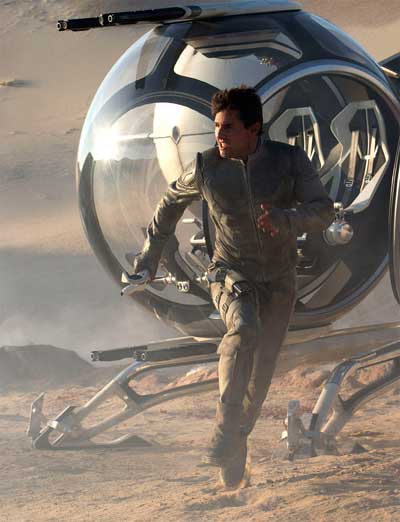 Cruise plays Jack Harper, one of two remaining humans left on Earth which is now a wasteland. A race of aliens have descended on the planet in an attempt to take over and although humanity emerged victorious in the end, the aliens succeeded in destroying the moon & the resulting disasters killed billions & decimated the planet. Jack & his partner, Victoria (Andrea Riseborough) stayed behind in order to monitor & repair giant processing machines that are sucking all the water from out of Earth’s oceans & converting it into energy to power the colony where the remaining population now lives (Located on one of Saturn’s moons). These giant water sucking behemoths are also watched over by attack drones which in turn are attacked by some of the remaining aliens (Called “Scavs”) and they too need to be repaired by Jack every so often. Melissa Leo plays Sally who is only seen & heard on a video screen, giving orders from on high to Jack & Victoria as they count away the two weeks remaining before they can go join the rest of humanity & leave Earth uninhabited. 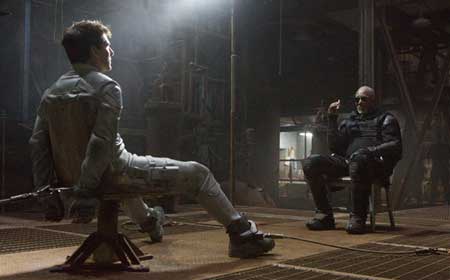 On a repair mission Jack discovers that one drone is missing so he commences a search for it on land with his handy motorcycle & eventually comes upon it in a cave of sorts. But he is ambushed & nearly captured by a group of scavs before a drone rescues him. He emerges from the hole only to find his motorcycle gone & has to walk (A really long walk considering how far he went on his motorbike) to his spacecraft to return back to home base. He returns the next day only to discover that those weren’t scavs he tussled with earlier, they were what’s really left of humanity. And then Jack is shown what’s really happening to the last of mankind. 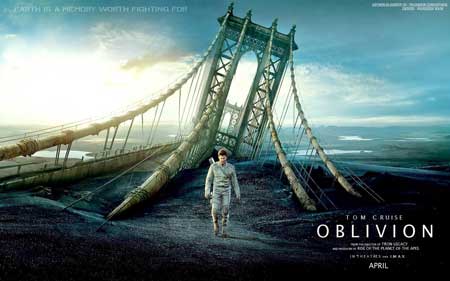 Morgan Freeman plays Morphe…I mean Beech, the leader of the few remaining humans on Earth. And when Jack hears what beech has to say the meaning of his entire life comes into question. The unexpected reappearance of a woman from his past, Julia (Olga Kurylenko) only serves to complicate matters even more for the poor guy. There really is little more I can say without revealing too much of the story and spoiling it for you so I’m just going to offer some thoughts about the film as a whole.

I am so sick & tired of these bloated, mega budgeted “Blockbuster” films that seem to think they’re offering some deep insight on the nature of man (“INCEPTION” & any MATRIX sequels, I’m talking to you). Hundreds of millions of dollars are spent fulfilling the wet dreams of directors who can’t direct or write worth a damn yet continually find a studio willing to fund their so called “Visions”. Kosinski already got Disney to shell out the big bucks for his “TRON” sequel which was a critical disaster but a decent moneymaker so I guess Paramount thought it was just good business to write him another nine figure check to try again. I mean…Cruise usually guarantees a good opening weekend at least doesn’t he? 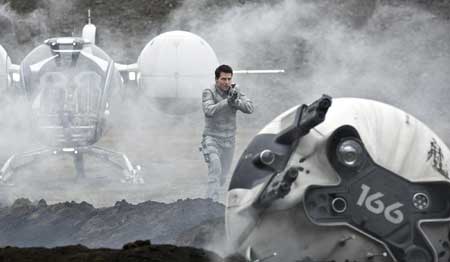 I find it dismaying that the end credits begin with “Written & Directed” by Joseph Kosinski” when Kosinski’s script (Tightened up by 3 others) is basically the result of watching “2001: A SPACE ODYSSEY”, “MOON”, “INDEPENDENCE DAY”, “WALL-E”, “SOLARIS”, “THE OMEGA MAN”, “SILENT RUNNING” & “THE MATRIX” all in one evening. Don’t believe what other critics say people, they’re already falling over themselves trying to praise this pretentious claptrap louder than the next guy. “OBLIVION” doesn’t have one single original idea in it’s bloated two hour plus running time. It’s just an amalgamation of bits & pieces from all of the previously mentioned films that are haphazardly glued together in an attempt to make it all seem meaningful. In that regard it fails completely & unmistakenly.

I saw this in the IMAX format & if any of you are familiar with IMAX you know that the screen is gigantic & the sound literally booms throughout the auditorium yet I took a few moments to look around every so often and found dozens of others with their heads lolled back in their seats, flies buzzing over their open mouths, sleeping soundly. This despite all of the noise from the film. As a matter of fact I’ve never been to a movie that was so loud yet so completely & utterly boring in my life. It took every last bit of my will to keep my eyes from shutting tight & joining the lucky ones in a nice little nap. 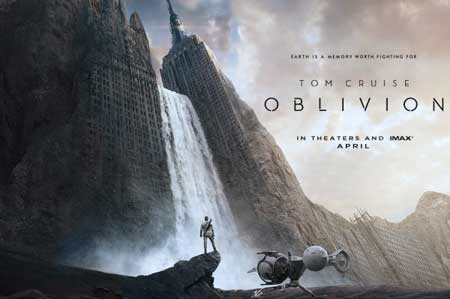 How a film that gleefully cobbles from so many other (Better) movies can be so listless & soporific is beyond all my imaginings. I mean it’s literally impossible to steal so many ideas from all of the above listed films and have “OBLIVION” be the end result. I checked the date on my phone believing that today was April Fool’s Day & this was all some bad joke but sadly, oh so sadly, it wasn’t. And people I spoke with afterwards didn’t know what the hell was going on either, the one thing we all agreed on was that when this gets released to home video we’re all gonna purchase a copy to help us sleep on those nights when the sandman is feeling stingy & we can’t sleep. If Paramount could find a way to convert this movie into capsules & bottle it, the people who make Ambien would be out of business in a week.

“OBLIVION” does a few things right though. It looks absolutely stunning, maybe even setting a new high water mark for visuals. The wastelands that were once Earth are both foreboding & depressing yet they look so alive! In the IMAX format they look like you could literally walk right into the screen & join Cruise in his adventure. The score (By M.8.3) is wonderfully engrossing with a down tempo tech groove that carries the movie along quite nicely. There are only a few major speaking parts here besides Cruise but all involved do their best & serve the story well enough (Special kudos to Melissa Leo). If you look quick enough you’ll see Tarantino fave Zoe Bell in a small role here also.

In the end as much as I wanted to like “OBLIVION” it worked way too hard attempting to put me to sleep to give it anything close to a positive review. Why is it that nowadays films just don’t know when to end? “OBLIVION” seems to purposely drag it’s already way too convoluted script to the breaking point and then continue to bore us into (I gotta say it) oblivion! 20-30 minutes could easily be cut here & while it wouldn’t make it any easier to understand at least it would have a reasonable running time. Despite it’s incredible look & sound it’s a terribly dull film & a equally disappointing film as well.

I hope someone at Paramount reads this & takes my idea about turning this movie into sleep caplets seriously. They’re sitting on a gold mine & don’t even know it yet.