A vicious monster has arisen from its watery lair! It’s the Riverbeast, and he’s threatening a peaceful New England town. Local tutor Neil Stuart has seen the beast before, but nobody believed his story, making him the town laughingstock. Neil sets out to not only prove that the Riverbeast exists, but also, with the help of his beautiful pupil, scrappy tutor buddies, and a former professional athlete to vanquish the aquatic menace!

Over the years, a tiny faction of independent horror film makers have found a niche in paying faithful yet ribbing homage to the drive-in midnight monster fare of yesteryear.  Meandering, wordy and taking what often felt like days to get to the good stuff, stellar examples of celluloid such as “The Day of the Triffids” still hold a place in the hearts of sci-fi and horror geeks alike.  Thank you, “Mystery Science Theater 3000” for keeping that love alive.  Since, film makers such as Larry Blamire and Christopher R. Mihm have capitalized admirably with their cinematic throw-backs to those simpler, schmaltzier times.  I have a soft spot for each and every one of them.

That doesn’t necessarily mean they’re all great, however.  (See review for “Piranha Man Versus Werewolf Man: Howl of the Piranha.”)  I approached “Don’t Let the Riverbeast Get You!” with some trepidation, as I was completely unfamiliar with the previous works of director Charles Roxburgh and his co-writer/star Matt Farley.  Their earlier films, “Freaky Farley” (2007) and the wretchedly named “Monsters, Marriage and Murder in Manchvegas” (2009), were both equally reviled and exalted.  I may have to check those titles out should the opportunity arise, because “Riverbeast” is another low-grade delight in the same “Hey gang, let’s make a movie!” vein of Blamire and Mihm.  Though it makes their ilk look like “Oz the Great and Powerful” in terms of scope and budget, it still constitutes an enjoyable afternoon killer and a decent addition to the genre.

A shrewd tip-of-the-hat to low-budget guru William Castle begins the festivities, as an obviously wise (he’s reading a book when we find him) gentleman in a high-backed chair explains the horrific nature of the “true story” we are about to witness.  For the faint of heart, he confides, a red light will flash on the screen before the beast’s appearances should they wish to shield their eyes.  He then demonstrates how to properly do so in a moment that I’m not entirely certain was scripted (like many throughout the film), but had me nearly spitting up my Pabst regardless.  This was fun stuff already.

After a three year absence, Neil Stuart (played by Farley) returns to his hometown of Rivertown for a relative’s wedding.  Neil was once the city’s proudest son, and the very best educational tutor (?) anyone had ever known.  Then, after sighting the beast on the banks of the Merrimack River while walking through the woods out-skirting town, he became the laughing stock after trying to warn the other citizens about the monster.  Stood up at the altar by Emmaline (Elizabeth M. Peterson) after his humiliation, he left Rivertown in shame.  With the plucky conviction we’ve come to expect from our leads in these movies, Neil decides to to prove the Riverbeast’s existence and win back his lost love.

Though the characterizations are calculatedly (I’m being optimistic by using this term) wooden, it’s the dorky slice of small town life that keeps the interest throughout piles of exposition we’re nearly buried beneath before the creature gets around to offing folks.  Neil’s best friend Teddy (Tom Scalzo) hasn’t played a note on his guitar since Neil left, and Emmaline is engaged to a jerk (Nick Lavallee) who wastes no time in proving his douchebaggery by delivering a well-placed blow to Neil’s breadbasket.  He begins tutoring the inquisitive Allie (Sharon Scalzo) and strives to get his band, The River Mud Warriors, back together.  Aside from his own inner metaphorical demons and the real creature lurking about the forest, there is much on our nebbish hero’s plate.  I’m probably omitting approximately eight other sub plots for the sake of brevity.

One has to forgive the performances and pacing in order to appreciate these enterprises.  In the past, I have sunk movies based solely on either of these factors, but a different consideration must be brought to the table for works like “Riverbeast.”  Though they can hardly be accused of acting, the players are all earnest in their interpretations, and that alone can keep a film afloat.  Farley and his troupe are having a good time, that’s what matters.  I suspect all are, in front of and behind the camera.

Does the Riverbeast itself need even be discussed?  It’s a dude in a cheesy costume, of course, and another variation on the “Creature from the Black Lagoon” ensemble.  We are offered so few glimpses of the beast before it finally begins its murderous rampage at about the 50 minute mark, it elicits an unwarranted thrill every time the crimson strobe kicks in to announce its close proximity.  The instances in which it emerges from the river waters, its struggles crawling up the muddy bank are worth the price of admission alone.

The cumulative battle between our protagonists and the Riverbeast is giddy, faux epic hilarity.   In a final revelation that is so overtly yet insidiously foreshadowed by a pop-and-locking hippie chick earlier, Neil is able to best the creature after seemingly every other surviving cast member has failed in the task.  He gets the band back together, rekindles Emmaline’s love for him, and earns his previously lost respect from the townsfolk.  If you’re aghast by my handful of spoilers just then, you really haven’t seen one of these flicks.  Another important tip to possess going in is, don’t expect any surprises.

A word of warning: You will not be able to get either of the River Mud Warriors songs out of your head any time soon after a viewing, no matter how much you’ll wish to.  Films like “Don’t Let the Riverbeast Get You!” (I am so sick of typing the word “river”) are nearly above reproach, because you either love them or regret the time you were forced to sit through one by a nerd like me.  For those who have yet to experience these modern blasts from the past, you may be better off searching out “The Lost Skeleton of Cadavra” or “Cave Women on Mars” if looking to receive the most bang for your buck.  Still, this would be a fine place to start as well. 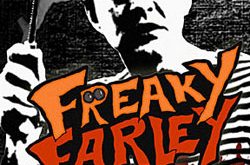