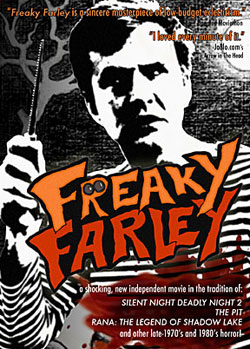 When Farley Wilder (a weirdo peeping Tom in a small New England town) meets a daring young woman, he gains the confidence to both stand up to his domineering father and also save the town from the hushed-up secret that’s been killing people for decades!

“Freaky Farley” isn’t freaky but it’s definitely a really bizarre little film. Half the time I had no idea what it was I was watching but to the film’s credit, it wasn’t dull and actually rather compelling and funny. I’m not sure how exactly to categorize the movie, part comedy, part coming of age film, part fantasy, and part every other genre they could throw in. The filmmakers obviously had an end goal in mind and I assume they were able to attain it. What that goal was, I will never know, but if it had something to do with making a bizarre little film, then this is a success. Farley (Matt Farley) is the town peeping tom.

He always wears white and black striped shirts, lives with his father who quizzes him on whether or not Farley listened to his radio show the night before. His mother died in a car accident and has to dig a four foot by four foot hole and fill it back in as a punishment. Farley falls for Scarlett (Sharon Scalzo), the only person in town that really seems to take Farley seriously and not out to make fun of him. Farley manages to seduce an old lady, meet a bum who claims to be terrorized by “the Troggs”, comes across a ninja, and tries keeping away from the “most annoying girl in the neighborhood”, who has a crush on him.

How all this came together and not be a complete mess, I will never know but this film had a rare charm that can only be found in an independent film. One thing that had originally threw me off was the acting. The characters, I believe were supposed to be young adults, but were mostly portrayed as being childish or acting childlike. At first it drove me nuts, then I just realized that it may (or maybe it wasn’t) be intentional and just added to the festivities. Now the story pretty much follows Farley as his father tries to teach him to be an adult and to learn discipline. He fears his father but at the same time he marches to the beat of his own drummer and cannot be tamed.

This is a hard film to review and not give away too much and the less you know the better. There is also a mystery at play that involves the death of Farley’s mother in a car crash and a family cabin that Farley’s father forbids him to speak of. The performances by the cast were uneven, but within the context of this particular film they work and are fun to watch. Though the film was done on a tiny budget, director Charles Roxburgh was able to make it look good and feel much larger than it actually was. Most of the films violence, the tiny bit that there was, was shown predominately off screen or from a distance so there was no room for any real effects but it didn’t seem to matter much.

Now I have heard that this film pays homage to “Silent Night, Deadly Night 2” but I haven’t seen that film since I was a kid and remember next to nothing about it. I want to go back and watch it now. I am interested to see what, if any, the comparisons may be. As it stands, “Freaky Farley” is a weird movie, the type of film that makes you stop and ask yourself “What the hell am I watching?”, and that isn’t a bad thing. The script, by Roxburgh and Farley, is such an interesting idea that I really hope these two stick together to do something else. There is a certain odd rhythm that the two captured here and would be interesting to see if lightning could strike twice with a different project. If you’re a fan of the weird, then it’s worth the trouble to seek this one out.