Home | Some Artwork For The TV Version Of ZOMBIELAND

When I first heard of a weekly TV version of ZOMBIELAND was in production, I was a little skeptical but with horror TV going so strong right now it might turn out that those folks over at AMAZON just might be onto something. Tonight a press release showed up and along with it came some pretty kick ass artwork that I wanted to share.

First up though, the facts:

Amazon Studios, the original movie and series production arm of Amazon.com, announced it will add cult classic Zombieland to the line-up of pilots already in production for Prime Instant Video. Zombieland, which is the seventh comedy pilot added to Amazon’s pilot line-up, will be made available (along with the other six comedy pilots and six children’s pilots) for free on Amazon Instant Video and LOVEFiLM UK. Customers are invited to view the pilots and then review them on the site; customer feedback will help determine which of the 13 pilots Amazon Studios will make into full-season productions, to air on Prime Instant Video.
“Zombieland is a fan favorite and we can’t wait to see where this storyline goes in a serialized format,” said Roy Price, Director of Amazon Studios. “We’ve been announcing a lot of exciting exclusive content for Prime Instant Video, like Downton Abbey, Under the Dome, and Justified; and we think adding original shows to that lineup is going to make Prime even more enticing for customers.”
Zombieland is based on the hit Columbia Pictures movie of the same name and finds four survivors outwitting zombies and searching for a place to call home. The Zombieland pilot comes from the feature film’s original creative team, writers Rhett Reese and Paul Wernick (G.I. Joe: Retaliation, The Joe Schmo Show), and producer Gavin Polone (Gilmore Girls, Curb Your Enthusiasm). Eli Craig (Tucker and Dale vs. Evil) is directing the pilot.
The part of Tallahassee will be played by Kirk Ward (The Island), Maiara Walsh (“Desperate Housewives,” “Switched at Birth”) is cast as Wichita, Tyler Ross (Milkshake) will play Columbus, and Izabela Vidovic has the role of Little Rock.
“Zombieland will strive to break the rules—action, adventure, thrills, chills and laughs and all packed into a half hour format,” said creator Paul Wernick. “This is not your average show, but Amazon is not your average network.”
Amazon Studios, the original movie and series production arm of Amazon.com, has begun production on six comedy pilots, Alpha House, Browsers, Dark Minions, Onion News Empire, Supanatural and Those Who Can’t. Additionally, six children’s series are also currently in production, including Creative Galaxy, Oz Adventures, Teeny Tiny Dogs, Tumbleaf, Sara Solves It, and The Untitled J.J. Johnson Project.

Here’s that artwork for ya: 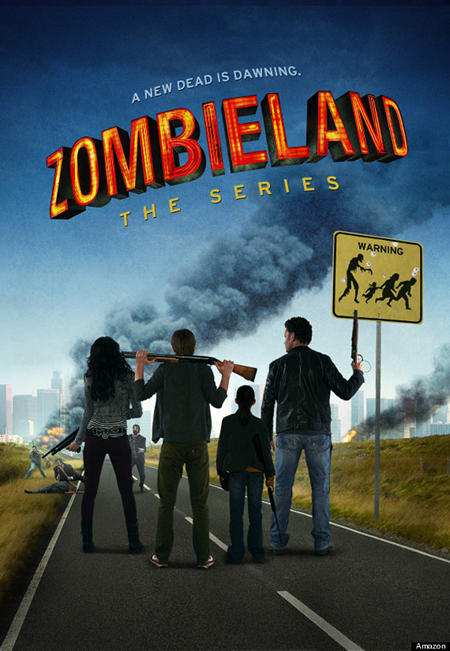