Land of Shadow and Substance: The Lonely

Along with fear, loneliness is a powerful emotion that can fundamentally change a person, usually without the person even realizing. The Lonely takes this concept head on, but it wasn’t without issues. Filmed in the oppressive Death Valley heat, there were various and obvious associated trials. The Director of Photography, George Clemens collapsed and fell from the camera crane; attempts at conveying on camera sweating were in vain as the dry heat absorbed any and all moisture forcing the crew to use a spray solution of ninety percent oil and ten percent water. While the oil would remain and bead up, the water quickly and continuously evaporated before the cameras could begin to roll. Jean Marsh, who played Alicia, had to lie down on the sands for a particular camera shot…the thermometer beside her registered 140 degrees. Nonetheless, two days proved too long and all returned to the comfort of the MGM Studios for final scenes. 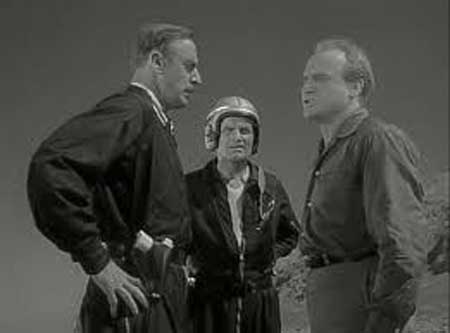 James A Corry (Jack Warden) is an admitted self-defense murderer, sentenced to fifty years of isolation on a barren, distant asteroid some nine million miles from Earth. Captain Allenby (John Dehner), the leader of a supply ship that periodically visits, doesn’t share the court’s sentiment and views the punishment as cruel. Taking pity on the criminal, Allenby will sometimes, when orbital time permits, take the time to play a game of checkers or cards, usually leaving something behind to aid in occupying time, such as an old jalopy that took Corry six months to build.

Most recently, in an effort to aid in battling increasing loneliness, Allenby leaves him a large metal box. Inside the box is a female robot named Alicia (Jean Marsh) and so closely resembling a human with actual traits and emotions built in; having a memory able to store and learn; unable to ever fall ill and having a normal human lifespan, that one would be hard pressed to spot differences. However, Corry knows the truth and initially rejects the idea, viewing her as an abomination and/or lie, and will not accept.

But, in a powerful scene conveying change, Corry, while ranting about his loneliness, pushes Alicia to the ground. When she turns around to look up at him, tears are streaming down her face and he instantly melts, obviously accepting her. Over the course of the next eleven months, the confliction of her being a machine weans, the two become great companions and he eventually grows to love her.

The day comes when Allenby returns with exciting news; that Corry has been pardoned and he is to go back to Earth with them. However, there are meteor storms threatening and the time for departure is running short. Therefore, they must hurry, as well as limit what he can take back with him to fifteen pounds. Of course, Alicia weighs more than that. Corry pleads to take Alicia along, arguing that she is an actual woman. Allenby tries to explain that she is simply a robot and Corry will not hear of it. 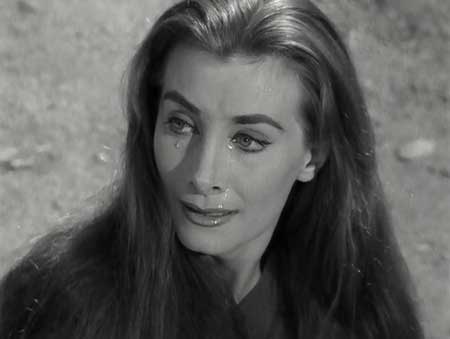 In a drastic measure, Allenby shoots the robot, tearing off her face, leaving nothing but exposed wires and microelectronics showing. A melancholic Corry accepts the solemn fact as Allenby tells him that all he is leaving behind is loneliness. Corry replies with “I’ll have to remember that.”

Next time – Time Enough At Last