MARK OF THE DEVIL Director Michael Armstrong To Film ORPHANAGE

After years of rumours and speculation by his fans, cult horror movie legend Michael Armstrong has finally been lured out of retirement by Paper Dragon Productions to direct his first major feature film for over forty years.

Following his 1970 genre classic, Mark Of The Devil, which shocked audiences and broke box office records worldwide, fans will be delighted to learn that Armstrong is to direct his much anticipated screenplay Orphanage.

“I agreed to be exhumed from retirement because I felt I could trust Paper Dragon Productions to offer me the creative freedom I need to realise a story I’ve wanted to bring to the screen for more than 30 years,” Armstrong said. “I very much look forward to working with them.”

Described as a sociological suspense shocker, a complete veil of secrecy has now been thrown around the project as it heads into immediate development.

Written and directed by Michael Armstrong, Orphanage will be produced by Paul Horsfield and Jonathan Jones, with Neil Jackson and Kevin James executive producing for Paper Dragon Productions.

Notable lighting designs include the national tour of I’m A Minger!, the London premiere of the hit off-Broadway musical Zanna Don’t! and several London productions for British Touring Shakespeare.

He co-founded Paper Dragon Productions to develop projects for international markets in film and television, alongside his ongoing theatrical endeavours. 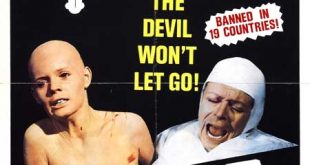 MARK OF THE DEVIL Writer & Director Michael Armstrong At BIFFF 2014