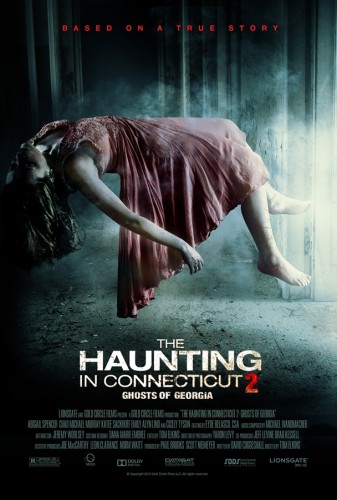 Andy and Lisa Wyrick (Chad Michael Murray and Abigail Spencer), along with their young daughter Heidi (Emily Alyn Lind) move into a secluded farm house in the Georgia countryside. When Heidi begins to see ghosts of their new home’s previous residents, Lisa realizes her daughter has the ability to see the spirits of the dead who remain behind, much like herself. With the help of Lisa’s sister, Joyce (Katee Sackhoff), the family begins to uncover the links between the supernatural haunting and events that lead back to a horrible tragedy during the 1800’s.

Based on true events, David Coggeshall’s screenplay and Tom Elkins’ directorial debut are saddled with the horrible tacked on title A Haunting in Connecticut 2: Ghosts of Georgia, a misleading moniker that does the film a terrible injustice. The film’s title is the obvious result of a studio trying to capitalize on whatever name brand or previous success, not matter how minor, that the film A Haunting in Connecticut managed to dredge up back in 2009. To be fair, that film did take in $55 million – which is no chump change – and director Tom Elkins did serve as the editor of the 2009 film. However, the two films have very little, if anything, in common other than being ghost stories based on true stories – which seems to be just enough. Combine the insulting title along with a dismal trailer used to promote the film, it was quite a shock to discover that the film is actually an impressive and well crafted little horror tale. While it is uneven and derivative, A Haunting in Connecticut 2: Ghosts of Georgia manages to contain a number of chilling and frightening scenes, a couple of creepy ghosts and a solid cast lead by Abigail Spencer and Katee Sackhoff. 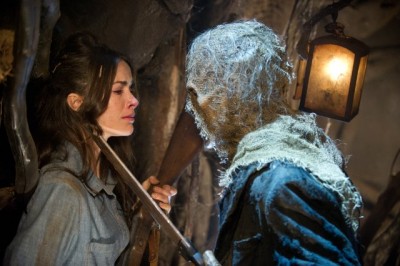 The film begins as it introduces Lisa Wyrick dealing with her Sixth Sense affliction as the ghost of her long dead mother tries to reach out from beyond the grave with a dire warning. Lisa drowns out the vision with prescription drugs. The film sets up her plight pretty quickly before moving along with the family, Lisa along with her husband Andy and daughter Heidi moving into the Georgia countryside. Before they can even settle in, Heidi reveals that she had a dream of the home already seeing a swing in the nearby woods. Soon the ghost of a previous owner, Mr. Gordy (Grant James) visits Heidi. The film quickly sets up the tension between Lisa and her daughter’s blossoming visions and between Lisa’s sister, Joyce, and Lisa’s husband, Andy. All the while more and more ghosts begin to appear in the woods, in the shadows, in the corners of their vision. It’s a surprisingly simple and effective scenario that is engaging with equal parts conflict and mystery. Even when it begins to become overly complex, introducing a convoluted back story, with a station master, a lynching and the Underground Railroad, A Haunting in Connecticut 2: Ghosts of Georgia never looses sight of its focus, the plight of young Heidi and the fate of Lisa Wyrick. 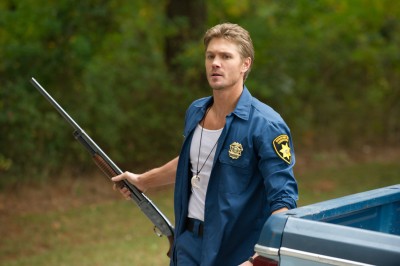 Part of what makes the film so engrossing and effective is the cast lead by Abigail Spencer as Lisa. Abigail provides Lisa with a constant struggle between her visions, her struggle to remain sane and her motherly instincts to protect her daughter. She wears her denial like an old house coat constantly relying on her prescription to mask the truth that surrounds her. This puts her character at odds with her entire family, even her sister, Joyce, who ends up living in the abandoned trailer home parked in the yard. Katee Sackhoff plays the sister who shares the ability to see the dead but choses to accept it as a gift not a curse. Sackhoff is fantastic in the roll playing off Chad Michael Murray as Andy and becoming a role model of sorts for young Heidi. Sackhoff effortlessly draws the viewer in; when her character begins to become concerned for the child’s safety and starts to realize the haunting may be far more threatening than she first guessed, it causes the tension to mount and the tension to rise. Murray rounds out the adult cast of the Wyrick extended family and makes for an entertaining and likable patriarch for the film. He is the sole person who cannot see the dead it seems and the first to believe Heidi is actually seeing the ghostly Mr. Gordy. His relationship and interactions with his on screen daughter is sympathetic and authentic providing the film its much needed hero role, at least early on. 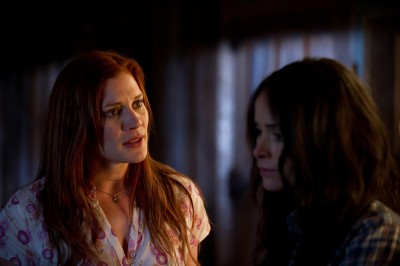 Much of the film follows the youngest star in the cast, Emily Alyn Lind. Emily, along with the girls from the recently released Mama (Megan Charpentier and Isabelle Nelisse), are, for many, the exception to the rule concerning film, kids and pets – typically a bad mix. Emily excels as the Wyrick daughter Heidi. Her character has to deal with not only seeing ghosts but with her mother who wont believe her and who is in denial of her own gift. She also has a tremendous amount of screen time and is in constant danger for most of the second and third acts. She never becomes irritating or annoying. She is constantly engaging, leading the audience along with her like a trained puppy dog. When it comes time to cast a remake of Poltergeist, Emily Alyn Lind will make a strong contender for Carol Anne. 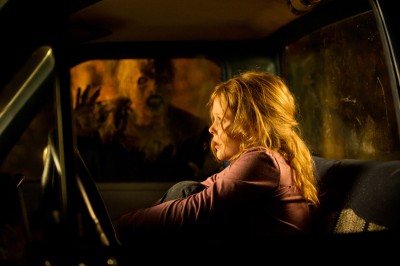 The ghosts of A Haunting in Connecticut 2: Ghosts of Georgia are a mixed bag. Some are thoroughly chilling providing goose bumps while others are weak providing laughs. Their inconsistent inclusion makes the film uneven at best. When they work, however, they are as frightening as many of the recent Hollywood theatrical releases. Regrettably, the erratic display of hauntings is frustrating. Some ghosts are little more than the ghosts seen on cheap knockoff haunting documentary TV shows and others are derivative and stereotypical. Thankfully, there are enough stronger realized spirits to keep things lively, especially Lisa’s mother, a screaming farmer ghost and the big bad, the scarecrow influenced Station Master. The final act provides the best examples A Haunting in Connecticut 2: Ghosts of Georgia has to offer. The film’s best achievement in its ghosts is providing Mr. Gordy something of a character arc providing his character a rewarding exit.

In the end, director Tom Elkins has created an effective and creepy little film regardless of its unfortunate title. A Haunting in Connecticut 2: Ghosts of Georgia is ultimately forgettable but it is entertaining and sports a strong, competent cast with Katee Sachkoff and Emily Alyn Lind as stand out additions. The film is far better than the title and the marketing suggests and is better than many films that make it to the theaters these days. If the ideas in the script were allowed to mature a bit more, the Station Master spirit for example, and the film was allowed to have its own identity, it would have had a shot at a successful theatrical run. As it is, A Haunting in Connecticut 2: Ghosts of Georgia is an above average ghost tale that should not be blindly tossed aside; it deserves consideration.

The Haunting in Connecticut 2: Ghosts of Georgia (2013) is now available on bluray per Lionsgate Entertainment

The Haunting in Connecticut 2: Ghosts of Georgia (2013)