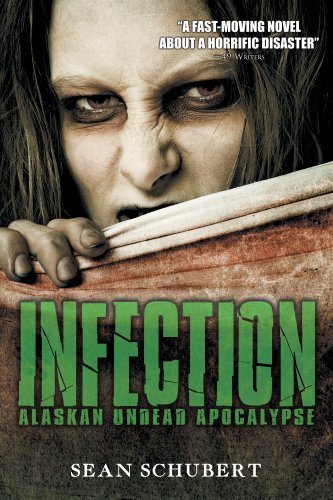 We’re starting to see the other side of the zombie fixation now, with the world starting to move on a bit from the obsession with zombies that has gripped popular culture for the past few years. The thing is, this is happening because the zombies that are being offered by various media are very standard creatures that we’ve seen a million times before.

Thankfully, Permuted Press continue to find titles and authors who can take the standard tropes of the genre and put a new spin on them, or at least write them in such a way as to be compelling reading for fans of the genre. For non-fans of the genre, there’s nothing to recommend INFECTION with, and to be honest, why would there be?

This is a zombie novel, full of the apocalyptic genre conventions and rag-tag band of characters that many have come to expect from zombie stories, but Sean Schubert demonstrates a talent for gripping the reader and keeping the story flowing which a lot o writers could do well to take note of.

The setting of INFECTION helps to set this book apart from others in that it’s set in Anchorage, Alaska, which gives proceedings the flavour of things like 30 Days of Night rather than just another NOTLD rerun as so many current pieces of zombie media can feel like.

The main characters Neil and Dr. Caldwell, along with the young characters Danny and Jules, are very much the focus of both the writer and the reader, and as such there are some points where other characters feel a little less fleshed-out than they could be, but that’s minimal as the story moves at a pleasing pace, which is nice as first books in a new series can be lacking in the pace and tension departments sometimes.

When Anchorage is essentially cut off from the outside world when the zombie apocalypse comes to pass, the characters we meet must forge uneasy bonds (in some cases VERY uneasy) and work together in order to stay alive. It’s not a case of an epic confrontation – this is about survival, which makes it addictive reading for the zombie enthusiast.