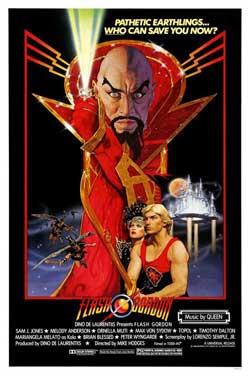 In Mike Hodges’ campy 1980, British – American, Sci-Fi romp, a football player (Sam Jones) and his friends (Topol and Melody Anderson) travel to the planet Mongo and find themselves fighting the tyrant, Ming the Merciless, played by Max Von Sydow, to save the Planet Earth from destruction.

This movie really takes me back. Way back. I remember doing a short, little write up for it back in Junior High School here in Rochester, New York.  In the Middle School newspaper. If I recall correctly I was pretty brutal, I was kind of inexperienced way back when and I didn’t really understand movies that were campy (even after watching the 1976 version of King Kong, the term “Camp” was still lost on me) and tongue in cheek. I suppose I have lightened up over the years with some movies and Flash Gordon is one of them. I searched around my collection to see if I owned it and viola! I did. It wasn’t very long ago that I watched it but somehow it ended up back in the basement. Hmm. Oh well. I brought it up and threw it on to watch and experience all the sci-fi goofiness yet again and suffice it to say I have a bit of a soft spot for Flash Gordon nowadays. Has it aged well? Umm not really. It is still corny but not without it’s charms. 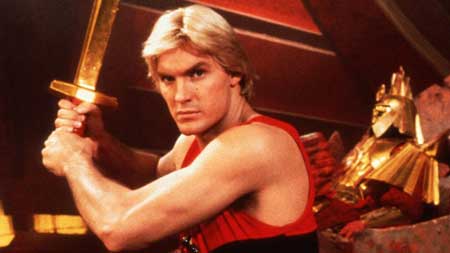 I’m sure by now many know the story and plot lines of this movie but I’ll do a bit of a recap for younger Sci – Fi movie buffs out there. I do hope, unlike me in my youth, the younger readers understand what camp is. Only because Flash Gordon oozes it and slaps you across the face with it. There is a pretty cool opening with flashes of the original comic strips being projected throughout accompanied by the now famous (or Infamous) title song by Queen and produced by Brian May. Then on we go! The very blonde and hunky Sam Jones plays Flash, a NY Jets football player. He sets about boarding a plane accompanied by the very pretty – eyed Melody Anderson (Dead and Buried) who plays Dale Arden. Arden is a travel journalist or other and has to share the plane with Flash. They get settled in and after take off they encounter a very freakish and strange looking meteor shower. The first victims being the pilots of the aircraft. They wind up disappearing from the c**kpit forcing Flash to take over trying to fly the imperiled airplane. After a great effort it ends up not boding well and Flash is forced to crash land the plane and ends up crashing into a greenhouse. Actor Topol (For Your Eyes Only) portrays Dr Zarkov, a very frantic and zealous scientist. Topol relishes playing this type of character that allows him to tap into a more comedic psychicality then other roles he’s played. He lures Flash and Dale to get into his rocket ship after his assistant bails on him and after a struggle they actually blast off. Zarkov tells them that the earth is in danger from a force in outer space that is making the moon hurtle towards earth. This unknown foe is also causing all of the huge disasters that is putting the earth in great peril. 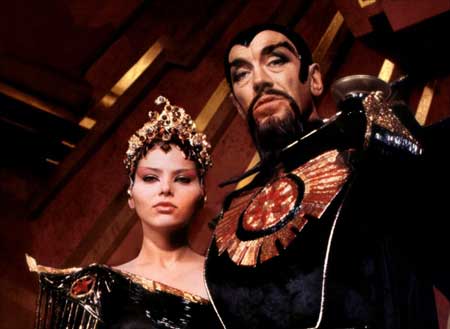 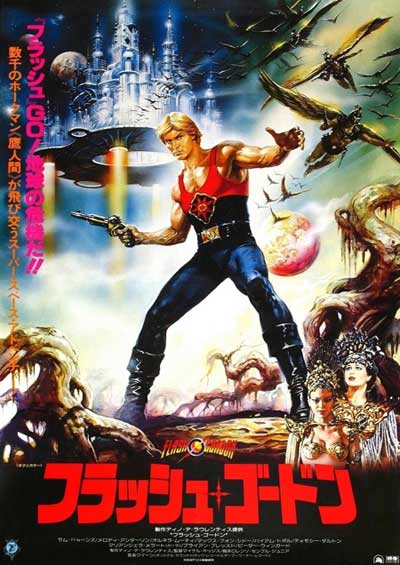 After they travel through space and land on the Planet Mongo. (I love that name. Mongo.) they get caught and taken prisoner by Ming (Von Sydow) and his deadly minions. Ming being the evil ruler who wishes to toy with earth before he destroys it. This is when the movie becomes insanely fun and fantastical. At times, though, teetering on the very silly and comical but it’s all in good fun. When brought before Ming, Dale immediately turns Ming on and he tells his goons to prepare her for his bed chamber. Flash gets the honor of being gassed and Zarkov gets to become a vegatable through a mind wipe. Fun fun fun. The first thing I noticed is that the movie is bright, colorful  and very gaudy. Danilo Donati has full reign over just about every aspect of this production. The Sets, the Costumes, Design and even Art Direction. Donato has proved to be very capable with Production design (Red Sonja) and Costumes (Armacord, Caligula) and here he really goes in for a very cartoonish dominance. At times it works. Like Ming’s main hall at his palace and the garish outfit he wears. Other times not so much. I’ll get to that later. 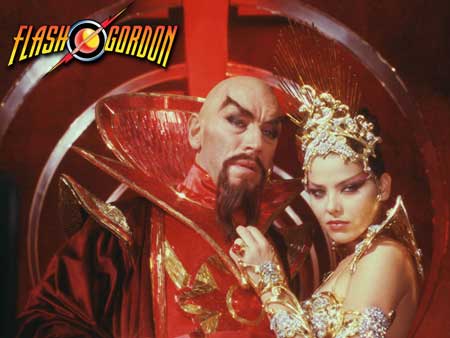 As a Sci-Fi opus of sorts Flash Gordon does have much to like. Space Travel, bored conquerers, hot babes, some gore and violence. Sam Jones, though, doesn’t fare so well. He’s a bit wooden and seems far away at times. For the stuntwork and action scenes, he’s cool and I guess that is where they needed him to be the best anyway. Melody Anderson is very capable and scrappy but she and Jones have hit or miss chemistry. On her own Melody is just fine. Von sydow is well…Von Sydow. Menacing, over the top and wonderful to watch as is Topol. Brian Blessed plays Prince Vultan, of the winged Hawkmen, is fun to watch as well. He bellows his lines for most of the movie and is also quite a scene stealer. Which brings me to Ornella Muti. Wow. She is all types of hot in this movie. Accent and all. She plays Ming’s daughter, Princess Aura, who wants Flash all to herself. They meet up with Timothy Dalton (Hot Fuzz, The Living Daylights) on the planet Aboria, where Aura flees to with Flash. Dalton plays Prince Barin who looks like an extraterrestrial Robin Hood. He is in love with Aura and is distrustful of Flash making him even participate in a weird ritual where he has to stick his arm in a hole and try not to get poisoned. They do get captured eventually, yet again. 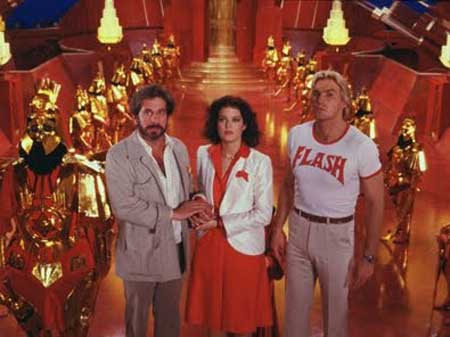 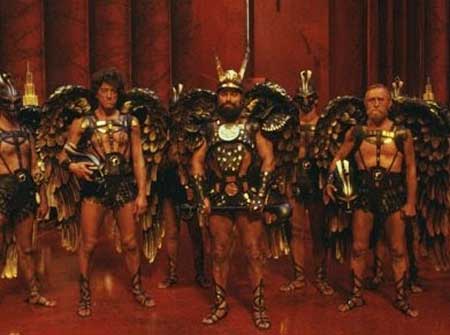 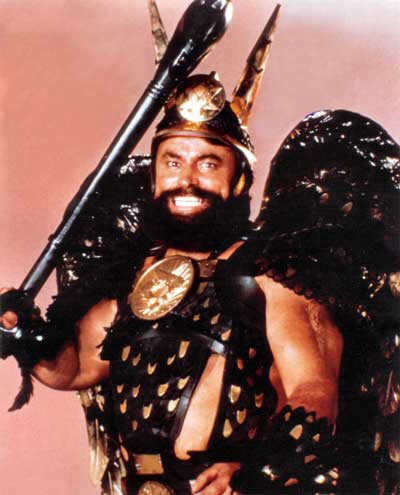 Enough about the story, boys and girls. Upon revisiting the movie I found it to be a great “bad” movie. Maybe one of the best. It was made with a great cast and featured some great dialog (“No, not the BORE worms!”) and action. If you lke some movies dripping with cheese and camp then this script by Lorenzo Semple Jr. (Batman, King Kong) will do just well. The movie is somewhat laugable in parts (Like Vultan’s big phoney wings) but I didn’t mind. The movie is an explosion of color, sound and big scenery chewing performances. It’s a fun, bright ride on the funky camp coaster. Everyone tries to relish in delivering the dialog and mustering the stamina for the hokey action and fireworks. George Gibbs’ special effects are very dated, unfortunately. Hawkmen appear and disappear in some frames. The models, done by Martin Bower and company look ok but still do not hold up well. But these can be minor things after one gets wrapped up in the fun. The film is very lovable in a corny sense. There are sky cities, rocket cycles, football-style fights, force fields and attacks from huge winged dudes that are a bit cringe worthy to watch but it’s still part of the charm of the movie. Taken on that level Flash Gordon is just dumb, childish fun and it’s based on an iconic Sci-Fi character. Flash Gordon has favorably become quite a cult classic. For a late Saturday afternoon one could do worse. You don’t want to miss out on a good “bad movie” watching a bad “bad” movie. Pop Flash Gordon in the DVD player and have some fun. If you despise it like I did as a teenager then you may be missing the point. Enjoy.