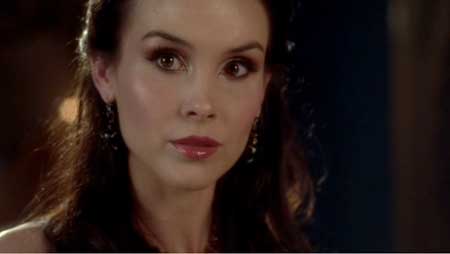 Tell us a little about Maurella.

Maurella is a seductress from the faerie dimension who has a passion for Andy. She is 500 years old, although she only claims to be 300. She is on her way to becoming an elder of the fairies, and is called in to help Sookie and Jason gain clarity surrounding their parents death.

How did you come to be a part of the show this season ?

Maurella’s debut on the show was in episode 11 last season [season 4] — it was such a privilege to be asked back again this year.

When you found that you would appear as a fairy that would seduce Andy Bellefleur, what was your initial reaction?

Andy Bellefleur is one of my favorite characters on the show – I have always thought he should be given a bit of romance in his storyline , so it was great to be a part of making that a reality.

Did you have any other favorite characters that you were hoping you’d get a scene with ?

I feel privileged to have worked with the actors I have worked thus far. Chris Bauer is an incredibly generous actor and human being. I learn something new from him every time we work together and with every conversation we have. I adore working with Anna [Paquin], she is tremendously talented and focused. She has a magnetism that just pulls you in – a beautiful person inside and out. The True Blood cast is phenomenal – incredibly talented actors on set and absolutely wonderful people off. It is a pleasure to come to work.

Have you ever had a role similar to Maurella in your acting career ? Also, is there anything you’ve enjoyed most playing Maurella ?

I’ve been told I have a faerie like quality my entire life , but surprisingly , Maurella is the first faerie I have played on-screen. I enjoy everything about Maurella. Being able to shoot balls of light out of my hand , read people’s minds , and seduce everyone ? What’s not to love ? 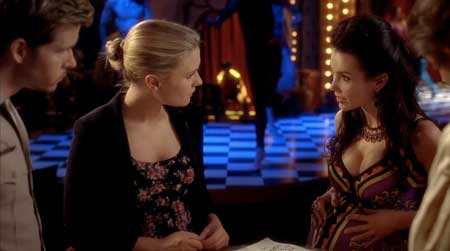 What was your favorite part of the wild fairy burlesque club in Episode 4 ?

What an amazing set that is ! It was a magical place to step into for the first time. The dancers were my favorite part of the burlesque club scenes in episode 4. I almost missed my que a few times because I was so mesmerized by them all stomping toward me in unison — I couldn’t take my eyes off of them ! As a former ballet dancer, getting to watch some of the best dancers in LA all day was really enjoyable.

Transcendent. I feel like I need to explain the context of that choice, but that would negate the ‘one word’ component of the question, wouldn’t it ?

What is your True Blood fantasy ?

I do have a secret fantasy that a vampire falls in love with Maurella and they are able to have a relationship without killing her for her amazing faerie blood. The vamps are so sexy and, being a faerie, I never to get to have any scenes with them due to the obvious implications. I’ll see them walking to the vampire authority set in their beautiful dresses and black leather and they look so great. I wish it was possible to become a fairy-vampire.

What else can fans look forward to seeing you in ?

I just shot a really great episode of NBC’s Grimm that will be out in a few weeks. Sighting, a film I am every about, will be out later in the year. It’s a fantastic project. And early next year another film another film I am proud of, Blackjacks will be released.

Will we see Maurella more often in the show ?

I wouldn’t want to give anything away by answering that .. We are a secretive operation.