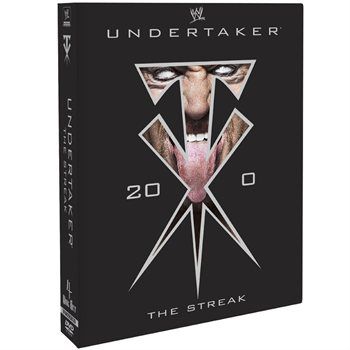 The Undertaker has remained undefeated at Wrestlemania with a record of 20 victories and 20 victims, which is an unprecedented accomplishment. World Wrestling Entertainment (WWE) has documented what is now known as “The Streak” in this wonderfully compiled 4 disc set. The first disc is an overview, documentary style, of all his Wrestlemania matches, and the remaining three discs capture those matches in all their glory.

The Undertaker’s Streak has become as valuable as any World championship in professional wrestling and sports entertainment. Each year on the grandest stage of them all, Wrestlemania, a lucky wrestler challenges The Undertaker in hopes of being the one to finally break the streak and defeat the dead man.

He has been there through it all, from WWF to WWE. He has weathered every storm from the days of Hulkamania along through the Attitude Era and right up until present day WWE.

Disc 2 of The Streak captures some of The Undertaker’s finest and earliest Wrestlemania moments. On March, 24th 1991 at WrestleMania 7, there was no steak yet. There was The Undertaker ( Mark Calaway ) fresh in from WCW where he wrestled as Mean Mark. He made his debut in late 1990 brought in by “The Million Dollar Man” Ted Dibiase. Brother Love managed The Undertaker briefly but it was Paul Bearer who had become synonymies as The Undertaker’s manager and walked him down the aisle at his Wrestlemania debut. “The Superfly” Jimmy Snuka became the very first victim and so the streak had begun.

The Undertaker’s brother, Kane was about to make his presence known. In storyline, Kane was burned as a child and was forced to where his signature red mask. Kane blamed the Undertaker and was hell bend of revenge. As also when the smoke cleared, The Undertaker’s status at Wrestlemania remained intact. In an interested side note, when The Undertaker was brought into the WWF, there was a very short period of time that he was called Kane, The Undertaker.

They dropped the Kane part almost immediately, and he was just known as The Undertaker. On March 28th, 1999 at Wrestlemania 15 ( and the only Wrestlemania that I ever attended ) Big Bossman fell victim inside the dreaded Hell in a Cell. On April 1st, 2001 at Wrestlemania 17, it was the first of three Wrestlemania matches that Undertaker would win against, “The Game” Triple-H. 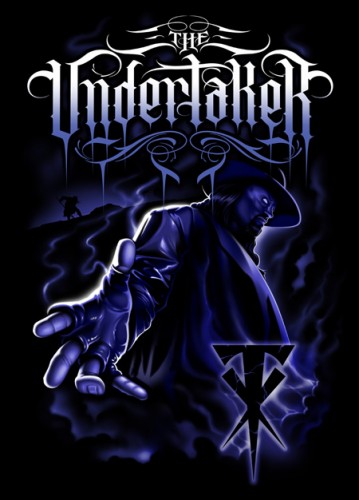 Disc 3 of The Streak continues and here we really see the WWE start to recognize “The Streak” as a separate entity.

On March 17th, 2002 at Wrestlemania 18 in a no disqualification match, The Undertaker takes on a man who is globally recognized as the greatest wrestler of all time. It was “Nature Boy” Ric Flair’s turn but even he came up short in trying to defeat The Undertaker.

On March 30th, 2003 at Wrestlemania 19, it was double trouble as The Big Show and A-Train teamed up to try to put an end to the streak once and for all. The Undertaker had two victims that evening.

On April 3rd, 2005 at Wrestlemania 21, it was Legend verses Legend Killer, as Randy Orton attempted to kill off The Undertaker and his ever growing streak. Randy Orton had been successful at killing off some of this sports great legends, but he bit off a little bit more than he could chew when he decided to tangle with The Dead Man.

On April 2nd, 2006 at Wrestlemania 22, The World’s Strongest Man, Mark Henry battled The Undertaker in a Casket Match, but there is no burying The Undertaker.

On April 1st, 2007 at Wrestlemania 23, The Undertaker put his streak up against Batista’s World Heavyweight Championship. Do I need to tell you who stood tall as the champion when the smoke cleared? On March 30th, 2008 at Wrestlemania 24 in the Main Event for the World Heavyweight Championship, The Undertaker defeated Edge and once again walked away World Champion! After two Wrestlemanias with back to back World title wins, you would think it couldn’t get any better, right? wrong.

Disc 4 of The Streak finishes with maybe the four best matches in The Undertaker’s career. They are definitely the highlight of this collection. On April 5th, 2009 at Wrestlmania 25, The Undertaker faced off against Mr. WRESTLEMANIA himself, The Showstopper, The Heartbreak Kid, Shawn Michaels. The match itself was off the charts. The Undertaker defeated Michaels in one for the history books.

On March 28th, 2010 at Wrestlemania 26, It was a No Holds Barred Match, but it was really much, much more than that. In what would be Shawn Michaels final match, he fell victim once again to The Undertaker. This was no less of a classic than their match the year before. On April 3rd, 2011 at Wrestlemania 27 the storyline continued. Shawn Michael’s partner in crime, Triple-H would once against challenge The Undertaker.

This would be 10 years since Triple-H’s last attempt to stop The Streak. This time the battle had more meaning. It was more personal, as the year previous The Undertaker retired the other half of DX, Shawn Michaels. Triple-H had something to prove. In a match for the ages, and one of the most brutal in the company’s history, The Undertaker survived and defeated Triple-H. The match took such a toll on The Undertaker that we wouldn’t see him again for an entire year. On April 1st, 2012 at Wrestlemania 28, this four year storyline would reach a conclusion.

The Undertaker battled Triple-H inside the Hell in the Cell in a match that was billed as End of an Era. If The Undertaker was going to lose, this was going to be it. Shawn Michaels was assigned special guest referee for the match, and he obviously had a strong personal stake in the outcome. As he somehow always does, The Undertaker finds a way, and in the end, The Streak remains intact.

This is an excellent collection to own if you are an Undertaker fan or a WWE fan. Will The Streak ever be broken? Well, that remains to be seen.