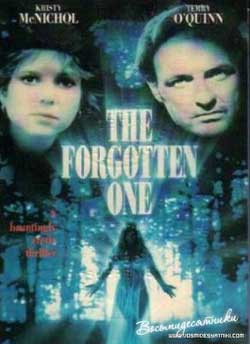 A man moves into a house that is supposedly haunted. Although he is attracted to his pretty next-door neighbor, he finds himself being seduced by the spirit of a woman who had been killed in his house 100 years previously

O’Quinn’s character, Bob Anderson, is a budding novelist who has purchased a house in a small neighborhood to get some quality writing done on his next novel. He’s also recently lost his wife, and the grieving process hasn’t really finished for him yet. Barbara (Kristy McNichol) lives next door, and she comes over from time to time to sort of tease Bob into thinking she likes him more than she does.
The film starts out dark and heavy right from the get-go, because once Bob gets settled into the house, he finds himself dreaming of times from his past with a woman named Evelyn (Blair Parker); he’s also starting to see dark figures in the house, especially in the basement. These are some of the best scenes in the film; the ghost of Evelyn is frightening because of its menacing presence – her dark hair covers her face and often makes her hard to see, her eyes are nothing more than blank holes in a skeletal face, and her ability to suddenly disappear makes it easy to imagine her coming out of nowhere at opportune times. 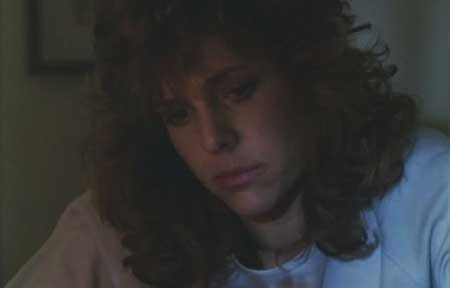 The way the film deals with the ghost is creepy, too. Bob, who can’t really let the ghost go even though he’s sufficiently scared out of his mind, follows her into the basement on more than one occasion, where he sees her moaning and crying and scratching at a brick wall. It’s the sort of thing one might imagine in a dark room at night, when everyone has gone to sleep and there’s a small creak from the basement; the ghost of Evelyn in The Forgotten One isn’t something you’d like to see down your cellar steps. 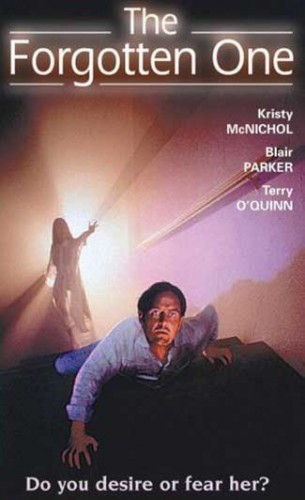 Eventually, Bob comes to accept that Evelyn is trying to tell him something, so he uncovers her skeleton in a locked chest behind the bricks. He buries her with the help of Barbara, and it is here where The Forgotten One begins to lose its hold on the horror atmospherics. Evelyn is able to come back in physical form thanks to Bob setting her free; her love for Bob is reciprocated, because somewhere in Bob’s mind is a memory of a different past, as though Bob has been reincarnated and in a past life he had loved Evelyn.

All of these details are shown in flashback scenes that Bob dreams, and sometimes Barbara leads us through Bob’s ordeal with unnecessary voiceover narratives. Evelyn begins to continue to see Bob during the night, seducing him with her sex while Barbara watches hopelessly as Bob treads in a world between the living and the dead.

Occasionally, The Forgotten One hits that moment where Evelyn’s obsession begins to feel a little creepy; there’s an atmospheric dread when she waits in his room with her shirt unbuttoned, chillingly asking him if he’ll stay with her forever. But the fact that Evelyn is, in essence, a real person at this point limits the film’s ability to scare, and instead the movie morphs into some sort narrative about an illicit affair.
It’s disappointing that the latter portion of the film can’t sustain what the beginning half has created, because The Forgotten One could have been a very entertaining film about strange love beyond the grave. Yet much of the late scenes in the movie are devoted to Bob first feeling devoid of feeling for Evelyn and then recognizing his past love for her, so much so that the romance overpowers the ghastly nature of it.
The Forgotten One makes for a unbalanced experience; on the one hand, it’s about a spooky woman who comes back from the dead to take with her the man she once loved, but on the other, it tries to represent a touching love that will never die. If one is looking for a romantic story infused with the paranormal, the film’s a little too over-the-top in that regard; if you’re looking for a ghost story, you’ll be underwhelmed. 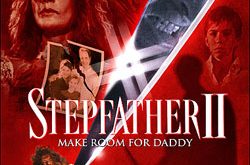