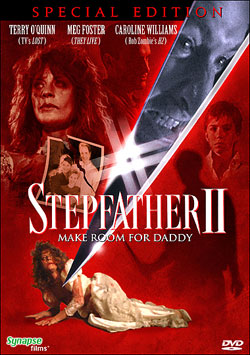 Terry O’Quinn returns in this sequel as the man who incorporates himself into one family after another — and then butchers them for fun. Presumed dead, we was actually captured and sent to an institution, but escaped. Having established himself in a small town with a new identity, he finds the perfect candidate for a new family in Carol, a real estate agent, and her son Todd. Can someone stop him before he once again satisfies his bloody urges?

The task at hand of finding a new father for one’s kids after a divorce is hard enough, but when a psychopathic killer is the one pining for your love and devotion, the task is now even more difficult than hoped. In Jeff Burr’s sequel Stepfather 2: Make Room for Daddy, Gerald “Jerry” Blake(Terry O’Quinn) returns as the serial killing psycho that has a passion to be a father and a somewhat normal family life. Jerry is shown in his prison cell, after coming after his family in the previous movie. He opens up his shirt, as he caresses his knife wound that happens after being stabbed for death.

His life in prison is systematic, going to regular visits with Dr. Joseph Danvers(Henry Brown) and building a visually perfect neighborhood in a industrial tech class setting. When Dr. Danvers feels that he has an intervention with Jerry, he tells the guard to quit accompanying them during sessions. This is a failure on Dr. Danvers part, when Jerry kills the doctor, and escapes the mental health facility in which he is held.

Jerry begins his new life on the run, by disguising himself with hair plugs on his balding head and changing his eye color through contacts. He watches a game show called “Dream House” on the television, where they advertise a new housing estate called “Palm Meadows Estates.” He is entranced by the neighborhood, and is shown a house by real estate agent Carol Grayland(Meg Foster.) Jerry goes by his new name, Dr. Gene Clifford, and Carol entertains Jerry of the thought that she lives across the street and alone with her son Todd(Jonathan Brandis.) Jerry takes up the phony practice of being a marriage psychologist, which has a group of lonely women, including Carol’s best friend, Madeline (Caroline Williams.)

Jerry charms his way into Carol’s life, quickly becoming the ideal father figure to Todd. Everything seems fine, when Jerry even constructs a skate ramp for Todd. Everything changes, when during a session Carol does not attend, a red car pulls up in the driveway across from Jerry’s. Madeline notices that the doctor is acting sketchy, and purposely leaves her hat on the chair next to her to retrieve later. After the session, Jerry finds out that the man at Carol’s husband Phil(Mitchell Laurance), returning for another shot at the marriage. This devastates Jerry’s plan of pursuing Carol, and causes him to breakdown mentally. Madeline comes in to discover that Jerry was not taking notes during the meeting, and becomes more suspicious of his motives.

Jerry convinces his wife to invite over his husband for a talk, and Phil is confused by Jerry’s invitation. Jerry eliminates the competition, by killing Phil and hiding the evidence in a junkyard. When Carol thinks that Phil has left her again, Jerry is there to welcome her with open arms. Madeline continues snooping through Jerry’s mail on her mail carrying job, and finds incriminating evidence that Jerry is indeed a fake. Jerry proposes marriage to Carol, and she accepts while Madeline tries to convince her friend that Jerry is not who he seems. Of course Jerry finds ways to eliminate Madeline’s attempt to ruin his new marriage, and plans his victory of a new family to slay. This plan is inhibited, when Carol and Todd must defend themselves against the crazy potential stepfather.

Terry O’Quinn reprises his role as Jerry, the psychopathic killer who wants more than anything to be a father. This slasher film is very believable, in that no one really knows what they are getting into with a new spouse after desperately searching for a new one. There are brief killing scenes, and bloodshed that is also portrayed in a quick manner. The setting is in the Northwest Pacific region of the US, and was easily shown through buildings and TV broadcasts on the news.

The Stepfather franchise was recently picked up, and made some money in theaters in the middle of 2009. Jeff Burr’s Stepfather 2: Make Room for Daddy was a good sequel to the first movie made in the 1980’s in the advent of the slasher flick genre. Even though I haven’t heard word of the original Stepfather 2, the success of the first Stepfather may lead to a remake that depicts a new telling of Burr’s classic film. 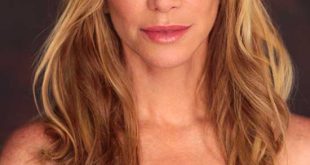