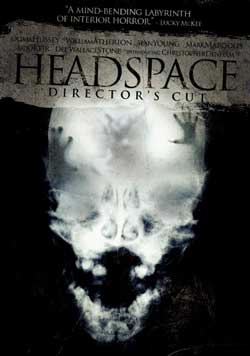 25-year-old Alex Borden is handsome, charming, and intelligent. In fact, he may be too smart for his own good as his life is swiftly becoming a living hell…

If there’s one thing that I hate, it’s a horror movie with delusions of grandeur. Don’t get me wrong…I can dig a horror movie with a “Message” every so often but in all honesty if I’m sitting down to see something called “The 12 Toed Monster That Killed Naked Blond Women Writhing In Ecstasy” then that’s exactly what I am expecting to see, not some scriptwriter’s rant against nudity in films disguised as a horror movie. It can be done, every other David Cronenberg movie has some underlying theme to it (“The Brood”/Divorce, “The Fly”/AIDS) but by and large if you’re going to call what you’re making a horror movie then skip all of the preaching & get to the red stuff already! 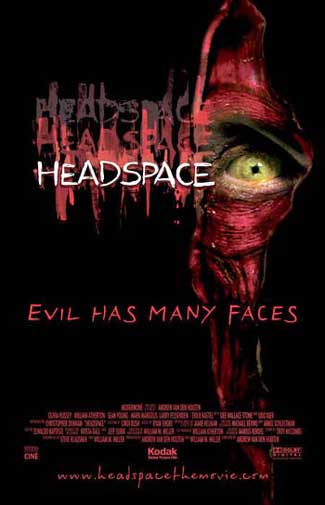 I wanted to open this review with that thought because I just sat through director Andrew Van Den Houten’s “Headspace” & while I dug the idea behind it I didn’t dig the way it was presented. It tells the story of Alex (Christopher Denham), a young man with a tortured past. As a child he witnessed his mother’s (Sean Young) descent into madness (Or was it something else)? culminating with his father (Larry Fessenden) blasting her in the face with a shotgun while trying to get both Alex and his brother away from her. The film then cuts to Alex 17 years later and he’s living in NYC, being paid to house-sit for a couple who are taking a vacation. For some odd reason he passes out while hanging with a friend and is rushed to the hospital. Doctors can find nothing wrong with him though they do figure out that he’s using his frontal lobe for thinking more than any human being has before. There are two doctors who have different ideas of what should be done with Alex. Dr. Bell (Dee Wallace Stone) wants to let him go home believing that there is nothing really wrong with these findings but Dr. Gold (William Atherton) wants to continue testing him.

Alex is suffering from some massively debilitating headaches but they don’t seem to have an effect on the way he’s able to assimilate information. He learns things immediately upon being exposed to them and eventually he starts to learn things WITHOUT being exposed to them at all, as if he either knew it all along or something is feeding him all of this knowledge. One day while strolling through central park Alex stumbles on a group of men watching an intense chess game and he finds himself fascinated by it. The winner of the game, Harry (Erik Kastel), is something of a professional chess player who plays others for money & never loses. Once Alex tries his hand at the game & loses he promptly decides to keep at it until he can beat Harry. As their relationship grows Alex follows Harry home one night to continue playing and finds that Harry is a painter and some of the nightmarish images that make up Harry’s work look exactly like some images that Alex has seen in his sleep. After a while of being exposed to Harry’s artwork, seemingly everyone that Alex comes in contact with die horrible deaths. There is some sort of creature that is ripping these people to ribbons and as Alex gets smarter…it gets bigger & stronger. Is there something that Alex has brought to life through the vividness of his dreams that is killing these people or is Alex behind all of the murders? 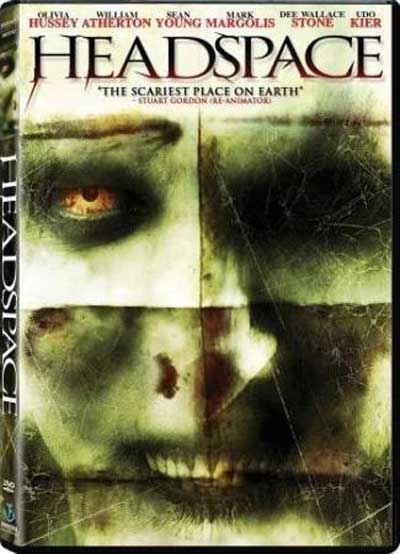 Sounds pretty good doesn’t it? For awhile it is as I was really curious about what was killing these people. During the prologue where we see Alex’ mom going insane there is a hint of something otherworldly creating her insanity. In one scene they find her with the corpse of their dog in her lap & it looks like she might have been eating it and just before dad blows her away her eyes seem to have taken on a different color. I began to wonder if this was something of a “Alien Possession” film with whatever is inside of mom being passed on to Alex. This would explain his sudden ability to sponge up information wouldn’t it? Well…I thought so anyway but I was wrong. What “Headspace” is all about is madness & how it might or might not be something that can be inherited from your parents and that’s not a bad idea to hang a script onto but does it need to be gussied up as a horror film to attract attention to it? 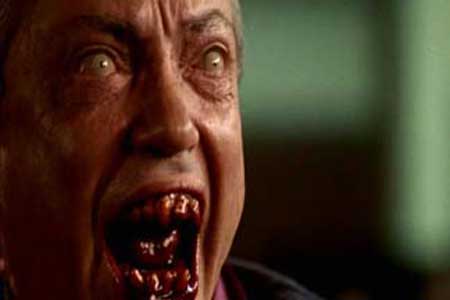 The first 15 minutes and the last 15 minutes are the best parts of the movie, much like a film I watched just last week called “Impostor”. The set up was well presented and piqued my curiosity and the last 15 minutes were pretty interesting despite a really “WTF” type of ending but the middle of the film meanders here and there without a lot of anything going on besides some plodding dialog and some blood being splattered about. It’s as if this script was written as a straight drama but someone decided that it was boring so they decided to spruce it up with a monster (Who we don’t really see until the end of the movie anyway). And when I finally saw the monster? Ehhh, it was OK I suppose but the movie would’ve benefited from showing me more of the creature earlier to break up the tedium. At least it was a good ole “Man in a monster suit” monster and not some middling CGI beast that wouldn’t have been too convincing on the low budget that this film had.

The performances are all good ones…all except for Olivia Hussey’s anyway. She plays Dr. Karen Murphy, a psychologist who’s working with Alex to find the cause of his headaches & ensuing nightmares. Her face is frozen with the same expression throughout her scenes and she looks out of place, it felt like she just wanted to get her scenes done to me and that’s never a good vibe to give off if your’re going to call yourself a professional actor. Although top billed, Dee Wallace is only here for a few minutes and that’s kind of a bait & switch that I don’t like either but she makes the most of her limited screen time. As Alex, Christopher Denham is good although sometimes his line readings are flat. I couldn’t decide if that was because of what the character was going through or if he’s just not that great an actor, I opted for the former. 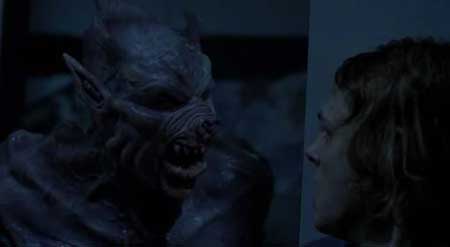 As I said earlier, the ending of the film is a real head scratcher and I still don’t really know what it’s all supposed to mean. This goes back to what I was getting at in the beginning of this review. Why end the film so dispassionately without resolution? What’s it all supposed to mean anyway? This is not why I watch horror movies, I watch them to be scared, nervous, disgusted, horrified & occasionally titillated. There is a sex scene in “Headspace” but it comes and goes without making much of a ripple anyway. So did it have any of the other effects on me that I just listed? Nope. It’s a drama with delusions of horror grandeur and that’s a shame because it might have worked as a straight up drama. As a horror film it fails miserably. I’ll still give it two shrouds out of five rating though because of the opening and closing sequences which (Minus the non ending) are pretty gripping. If you like this sort of thing then by all means go for it. Me? I think I’m gonna pop “Taxi Driver” in my Bluray player. Now that’s a drama with some horrific overtones regarding madness that actually works!