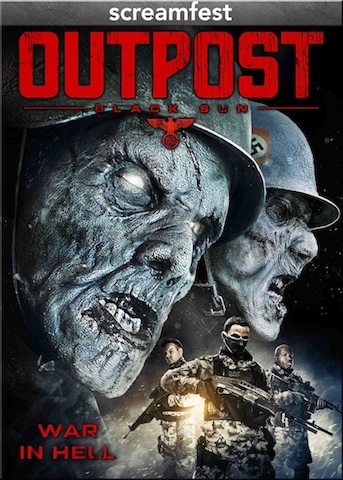 Lena (Catherine Steadman) is a bounty hunter chasing down war-criminals. The closer she gets to finding the infamous Nazi scientist named Klausener, the more she begins to uncover the madman’s terrifying secrets and plans. With the help of Wallace (Richard Coyle), a mercenary in search of those secrets, Lena comes face to face with Klausener’s Nazi zombie army. Soon they find themselves stuck behind enemy lines as the clock ticks down to an orchestrated arsenal barrage designed to devastate the entire area. Not only must they save their own lives but fight to prevent the rise of the zombified 4th Reich.

Director Steve Barker returns to his Outpost franchise begun with Outpost (2008). Since the original film, Nazi zombies have become a fan favorite with a number of flesh eating WWII monsters devouring their enemies on wide screens and small screens across the globe. They’ve also become cliche and a bit worn; this hurts the sequel, Outpost Black Sun, quite a bit. While the film is full of action and zombies with machine guns, the whole ordeals feels tired and uninspired. The film is full of plot and action, but light on character and atmosphere. Thankfully there is enough bite and brawn to keep interest throughout the film. With a little more attention to character, suspense and tone, this could have been a notable entry into the sub-genre. As it is, Outpost Black Sun isn’t zombie enough to satisfy nor war movie enough to win on action alone. The big bad also suffers from a lack of unique design. When compared to similar zombie masters, such as Dead Snow’s Standartenführer Herzog, the villain lacks the presence and menace the film would like the character to display. Outpost Black Sun is an uneven but entertaining Nazi zombie war flick with enough plot and twists to satisfy as an action flick.

The direction from Steve Barker is top notch with the focus being on setting up one combat sequence after another. He handles the lead character, Lena, quite effectively in the opening scenes; but, by the end of the film, he’s allowed the character to get overwhelmed by the plot devices and twists. The zombies never get to be zombie enough with the fact that they’re flesh eating monster being less and less an issue as the film continues. In an opening shot, Lena and Wallace watch some footage where a small squad of zombies surprise and overtake a hand full of soldiers; here, the zombies are menacing and imposing. Later, they are reduced to faceless soldiers where their gun power is more important than their hunger for flesh. Barker handles the gun play effectively and stages the action dramatically. The later shots of Klausener’s laboratory and scientific experiments are pure science fiction fun and mayhem. Even when the special effect become a little hokey, it still manages to keep its presentation well above common SyFy channel nonsense.

The acting across the board is solid with no one blowing their character or feeling terrible amateurish. The film consists of a well cast ensemble group. However, at the same time, no one stands out from the crowd, even the leads. Catherine Steadman makes a strong impression early on but has difficulty commanding the screen once the fireworks and gun play begins. Richard Coyle is entertaining as Wallace providing the character with a strong sense of authority and intelligence without losing the coy sensibilities that define the character and his decisions. Together, however, Steadman and Coyle lack much chemistry; they are simply acting opposite each other moving along with the plot. To be fair the film and script doesn’t seem to demand much else from them. Of the soldiers, Ali Craig makes the strongest impression with his sense of humor and delivery of the one soldier that questions following orders. Whenever he is on screen, the action and the stakes pick up.

Outpost Black Sun is a bit frustrating due to its grand ideas and high concepts that don’t have the character and plot to back them up. All the cool bits become little more than story beats and means to get to the end. It also suffers from being part of a sub genre that’s had a fair share of competition of late without bringing enough individuality to the Nazi zombie concept. It succeeds in its action and pace, keeping the events lively and tightly edited. It borders on boredom as it struggles to find an emotional or character driven conflict to draw the audience into the story. It feels like a thinly veiled horror themed combat video game. There is enough to make it watchable and enjoyable, but not that rewarding or memorable. Still, it is far better than many of its contemporary films and is worth a visit. If the film makers had a little more time to put more effort in building Lena and Wallace and their story, Outpost Black Sun could have made it to the top of the queue; as it is, it’s a pleasant and unoffensive diversion.

Outpost Black Sun is now available on bluray per XLrator 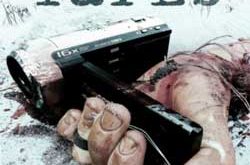