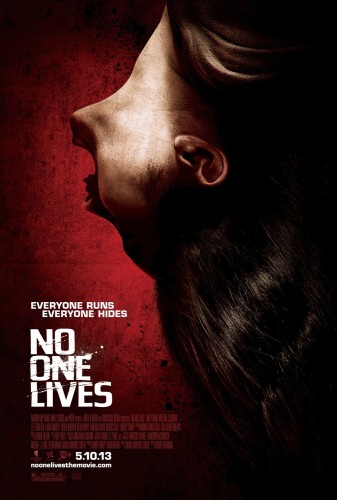 A young couple struggling with trust issues and a souring relationship encounters a band of rough necks in a local pub. When a pair of the criminal crew goes rogue, kidnapping the girl and leaving the man for dead, they unknowingly awaken an evil they are unprepared to handle. Ruthless, vicious and deadly, the man traps, tortures and murders the kidnappers one-by-one. It comes down to killer versus killer where no one wins, no one lives.

Luke Evans, Adelaide Clemens and Lee Tergeson lead the cast in Ryuhei (Midnight Meat Train) Kitamura’s second State-side effort, No One Lives, a brutal, violent, revenge flick with an inventive twist on the serial killer film. But sophomoric dialog, confusing character development and a lack of focus prevent the film from capitalizing on its core ideas and cripples its cast from providing interesting characters. For a director who is known for kinetic films such as Versus, No One Lives is stoic in its presentation with its action playing out in frame. The film feels more akin to its 80s and 90s counterparts than the modern take on psycho-killers it strives to be. The gore is plentiful with plenty shades of red to fill the screen. The kills and the horror are imaginative but poorly framed and staged. The film is doubly disappointing due to its own inability to make good on the promises of its intriguing premise. No One Lives and no one cares.

While No One Lives can be entertaining in a morbid sense, it never quite involves its audience emotionally. There is no true protagonist. The closest thing the plot provides is Adelaide Clemens as Emma, a young kidnapping victim thrown into the mix. But, by the time, the audience is introduced to the character she is already worn and jaded, far to unfriendly and empathetic to stand behind. The script wants the audience to feel for her, to follow her story, to scream for her survival, but the character, the circumstances and other key plot points prevent any of that to take hold. The film spends a fair amount of time developing the band of killers at the center of the story, but only Derek Magyar as Flynn, the rogue of the bunch, develops into anything worth while. The dialog illustrates the witty back and forth: “Flynn, you might want to drop the bad guy routine. I’m you path to living and you seem to be bent on playing the dying game.” Emma warns, while Flynn responds, “Well then we are going to die together, bitch.” 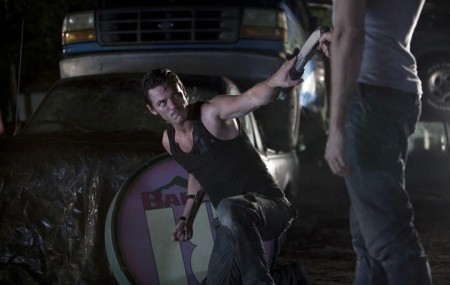 Luke Evans is gaining notoriety of late having just played the big bad, Owen Shaw, in the extremely successful, Fast & Furious 6; next he is set to appear in The Hobbit: The Desolation of Smaug and The Hobbit: There and Back Again as Bard. He is also currently up for the role of Eric Draven in the remake of Crow. In No One Lives, he plays a cross between hero and villain as a character only known as Driver. He is far more than he seems in the beginning of the film and continues to surprise throughout the story with a bizarre sense of code and loyalty. He seems hellbent on producing a progeny. What he is ultimately after remains a mystery. Evans spends much of the film staring into the camera, covered in blood as something incredibly gross happens behind him, smirking ever so slightly. It is meant to portray menace but never quite gels. It does not bode well for Eric Draven, but Evans is typically far better in his other work.

Adelaide Clemens follows her role in Silent Hill: Revelation 3D as Emma in No One Lives. Emma is a sole survivor of a murderous killing spree where dozens died and she was kidnapped. Her character is a sloppy mixture of heroine and damsel in distress with an odd hint of a Dexter in training thrown in for good measure. The dialog is stilted and forced making Emma come off as a complete bitch. She has moments of bad-ass power riffs, but never gets ahead of the pack, continually jumping back and forth from being tied up and beaten to kicking ass and calling the shots. It is all meant to be a complex role with conflicting emotions and ideals. But, the character is confused, so is the audience, and so, it seems, is Clemens. While she certainly admirably tries throughout, she is never as good as she is in the opening scenes where her character fights to escape and uses her brains to leave behind a simple message letting the world know she is still alive. 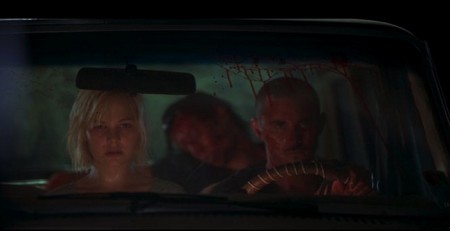 The film is a gore-filled revenge flick mixed with slasher and serial killer beats. It ends up with the pay off sequences coming out of sequence or losing impact. The film introduces the criminal gang in a particular brutal and nasty scene where Flynn shoots a family cold as they mistakenly arrive to their home a day early only to find the killers stealing everything they own. In another scene, the Driver offs his first victim with an open handcuff to the jaw, but only after his “girlfriend” is nearly decapitated by her own accord. It does not stop there with plenty of red stuff spraying around and body parts flying off left and right. The film hits its own set of high notes with its practical effects, including a full body suit of gore. It is just hard to figure out who the Driver is supposed to be like. Is he a Dexter? A Jason Voorhees? Or a Jennifer Hills from I Spit on Your Grave?

Ryuhei Kitamura, an accomplished director, the man behind Versus, Godzilla Final Wars and Midnight Meat Train, slogs through his efforts creating No One Lives. While he manages to breathe some life into a few scenes, such as the initial attack the Driver launches upon the petty criminals with shocking graphics and taut action, he misses the mark on other scenes where it seems he strives to duplicate 90’s action/revenge flick trope but misses the mark completely. Most of these misfires revolve around Luke Evans’ Driver character with the serial killer in the foreground and crazy action playing out behind him or the character stares menacingly into the camera. Unfortunately, the lighting and the pacing never establish the correct tone to carry this off effectively or emotionally. It is kind of cool, but only just barely. Missing is the kinetic energy of the eye-popping battle on the subway from Midnight Meat Train or the character interaction from Versus. Even when the action is at is craziest, a bloody reveal of the hidden psychopath or the gruesome disposal of the killer, the camera and shot are static, stilted and lifeless.

No One Lives is far less successful as a film as it is an interesting concept. It lacks a point of impact, a character to root for, to stand behind, to worry about or champion. The Driver is the revenge-driven hero, but he is also a psychopath. The film struggles to inform its audience if he is the lead or the antagonist. And the role is a complete mystery leaving much shrouded, which is the point of the character. This leaves Luke Evans wandering around grimacing with very little else to do. Adelaide Clemens has a little more to do but her dialog undercuts all her emotional beats and conflict. The film feels out of date, a decade or two too late to the party. It does manage a few memorable scenes of gruesome gore and the Driver is a compelling idea. A mediocre effort at best, No One Lives drops dead fast.