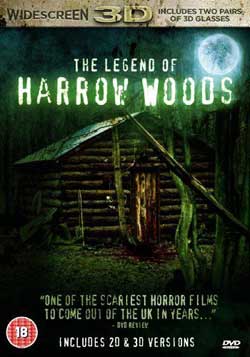 Horror movie, following the adventures of a group of students who enter the haunted forest Harrow Woods. With the aim of investigating the disappearance of horror novelist George Carney, a group of students, encouraged by Gary, enter the forest where he was last seen two years ago. Uncovering more than they had bargained for – not least that the infamous 17th century witch Lenore Selwyn was burnt at the stake in Harrow Woods and died laying a curse upon the ground beneath her – the students soon find themselves in a battle for survival.

The Legend of Harrow Woods, is a House of Fear production and the creation of Richard Driscoll, Casting by Darren Moore, this is a horror film based around the poem The Raven by Edger Allan Poe. Shot in the woods with a Blair Witch Project feel to it. Lots of blurry dark scenes where you have to squint to see what is going on.

Harrow Woods got its bad reputation in the 17th century when witch Lenore Selwyn was burnt at the stake in there and died laying a curse upon the ground beneath her. Many years later a group of students with their teacher Karl Mathers (Richard Waters) who belong to a ghost-hunting birthday club, go to the woods to investigate the two year old disappearance of horror novelist George Carney(Richard Waters), his wife and children and his brother. 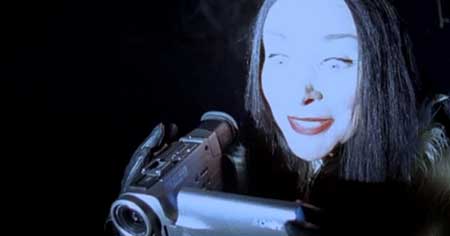 With the group of students is a medium named Anna (Kathryn Rooney) (Who by the way is very friendly with her married teacher Karl Mathers). It is her birthday weekend so this ghost/witch hunt is done in honor of her.

Anna immediately starts to have visions of George Carney and his family. Old George turns out was jealous of the attention his brother, Vincent (Robin Askwith) gave his wife. Their was some confusing scenes in a bathroom with three different toilet attendants and some naked women, where George is being taunted into believing that his brother and his wife are getting their groove on, So much so that his children may not even be his. He may be their uncle instead of their father. (Oogie-Gross).

Anna starts to get some gruesome visions that leads her to believe that Old George does away with his wife, children and brother.

A woman named Victoria Jordan (Eileen Daly) who claims to be a psychic joins the group. There is some tension between Anna and Victoria. Victoria causes some scares when she disappears and people have to go looking for her. Gary (Jason Donovan) a man who run a website for the club monitors the group from a remote area and contacts them by phone. It was Gary’s idea for the group to go and investigate the disappearance of George and his family. 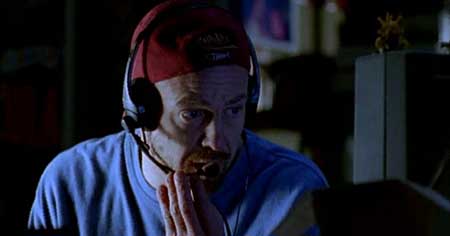 The group split up and half decide to go home only to get to the RV and not have the keys (typical). So they go back to find the keys and instead find other group members having been slaughtered. I was a little confused by this, (OK a lot confused). One of the guys look into the mouth of one they find dead and pulls out a tiny book. How did he know to look in the mouth? (If I saw a dead body and thought I might be next, I wouldn’t look in their mouth, I would run the other way.) The end of this movie is so confusing I really can’t say what was happening and what was vision of the beautiful Anna.

There were parts of this movie I actually enjoyed. For one, the poem, The Raven is nicely narrated by (Jim Johnson) throughout the movie. He gave a groovy Vincent Price feel to the movie.

I also enjoyed the legend of the Harrow Woods witch, Lenore Selwyn who was burnt at the stake and died laying a curse upon the ground beneath her. I wanted to see more about her. I would enjoy seeing a whole movie about her. I felt this movie was a bit scattered and a little confusing. It started off ok enough but lost momentum half way through. I feel like the ending was rushed and half done. 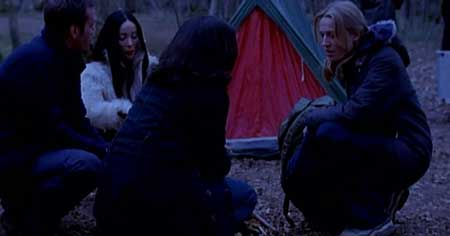 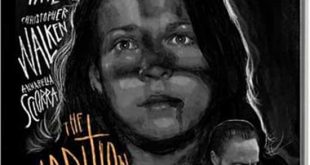