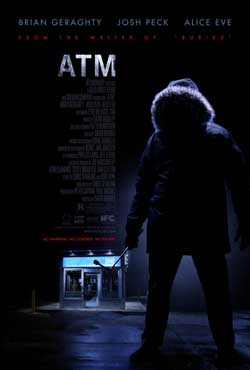 On a late night visit to an ATM, three co-workers end up in a desperate fight for their lives when they become trapped by an unknown man.

Greetings and salutations from the mortuary! I’ve been busy recruiting new acolytes for my army & dispatching them to the furthest corners of the globe to spread the word of The Black Saint. If you happen to run into one of them it would behoove you to listen to what they say. We are coming and if you aren’t with us…you know the rest. But for now lets talk movies, shall we? 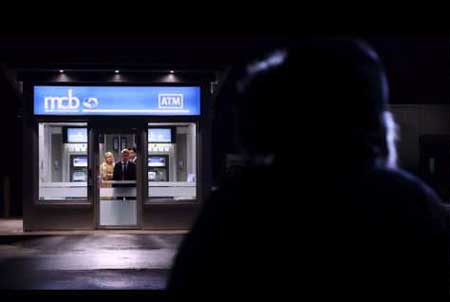 “ATM” is one of those “Trapped in a very uncomfortable place” type of movies. Here we find three co-workers who are getting some late night cash from a very isolated kiosk in the middle of a large parking lot. David (Brian Geraghty), Corey (Josh Peck) & Emily (Alice Eve) find themselves in a car short on cash and long on hunger so they make a stop at this extremely remote vestibule on an extremely cold winter evening only to find themselves trapped inside of it by someone who’s wearing a parka & is REALLY pissed off. The script takes pains to make sure we know who’s the good guy (David) & who’s the not so good guy (Corey), with Emily filling in the “Damsel In Distress” part. It should be noted that Corey isn’t really a bad guy per se, he’s more of a tolerable jackass who just happens to be friends with David. 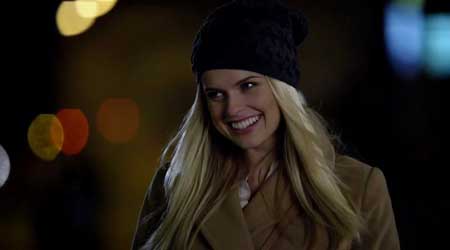 They get the cash from the machine and turn to leave when they find our nameless, parka wearing villain standing outside of the kiosk in a menacing stance. His face cannot be seen at all, which really adds to the effectiveness of his menace. “Man” (As he is called in the credits) is a pretty creepy looking villain and that’s saying something since we never see his face although eventually we do get to see his eyes. Actor Mike O’Brien manages to convey extreme menace with his body language and nothing else, even the way his shoulders move up & down as he breathes is menacing. Their wariness is confirmed when, after they ask him if there’s anything wrong, he sees a man walking his dog nearby and promptly walks up to the man & kills him. Then he just strides back to the front of the kiosk, waiting for them to come out. But why?? 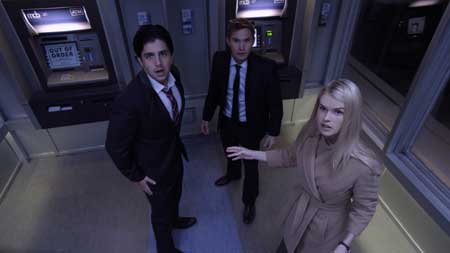 He can’t get in because he doesn’t have an ATM card to let him in and they can’t get out because he’s waiting for them but he has the upper hand because it’s freezing outside & the heat in the vestibule is slight (The cold doesn’t faze the killer at all) so the film becomes an “Us vs. Him” story very quickly. This is when it began to fall apart for me because once the battle lines were drawn the film gets very, very stupid. I understand that if everyone acted rationally in movies of this sort, none of them would be over 10 minutes long but come on!! Our three “Prisoners” are extra stupid (I like to think of them as “Stooooopid”) people who panic almost immediately & arrive at obvious conclusions 40 minutes after everyone else has.

It’s hard for me to get into the stupidity of the goings on without spoiling the movie so I won’t but I have to ask one very salient question, Why the f*ck would you park some 75-100 feet away from the ATM in the freezing cold & in the middle of the night when there are absolutely NO OTHER CARS to be found in the parking lot? Why wouldn’t you just drive right up to the front of the vestibule & dash in and out rather than trek the distance to the door in the cold? This is a prime example of lazy screenwriting to me. In order to facilitate the actions of the cast later in the film, the script makes them do stupid things right from the start. It’s just not believable to me (Nor should it be to anyone else).

And this is a shame because underneath all of the stupidity is a pretty good setup waiting to be let loose. The location is ridiculously remote but effective, the whole “He can’t get in but we can’t get out” situation is played out well & the villain is quite menacing indeed. The moody cinematography & quirky editing helps to sell the story also. Geraghty, Peck & Eve give good performances here. The relationship between the three of them feels believable and their back and forth banter doesn’t sound forced. Special kudos to Peck who is a daily visitor to the mausoleum as my son enjoys watching a show called “Drake and Josh” which features him as (Big surprise) Josh. He has grown to be a strong actor although I couldn’t help but see him as a kid since I watch the show with my son.

But everything the movie has going for it is waylaid by the moronic script. It just gets dumber & dumber as it goes on, eventually ending with a whimper & no real rationale as to why the preceding 90 minutes even took place. It’s one of those endings that keeps going through the credit roll that forces people to stay seated in the hopes that there’ll be a big payoff for them. Take it from me acolytes, you’re missing nothing once the end credits roll so you can get up if you like. 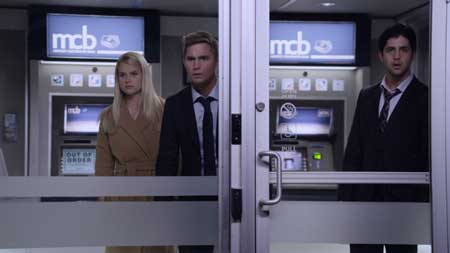 “ATM” was written by Chris Sparling (“Buried”) & directed by David Brooks. “Buried” was a hell of a good movie that featured Ryan Reynolds as a man in a situation somewhat akin to the situation here in “ATM” but it’s a far more intelligent & exciting film which is saying something since it’s basically just Reynolds in a box for an hour and a half. Brooks does a good job handling the directorial reins here but Sparling’s script fails him every chance it gets. Too bad, all involved deserved better. I cannot recommend you go out of your way to see “ATM” but I’m not going to tell you to avoid it either. I still kind of enjoyed it for it’s immense disdain for the intelligence of whomever is watching it & the way it revels in changing the rules of logic whenever it suits the script to do so. So I will rate it a 2 out of 5 shrouds because I’m a sucker for silly movies like this one. Just don’t forget to turn off your brain before you start it & you’ll do just fine. 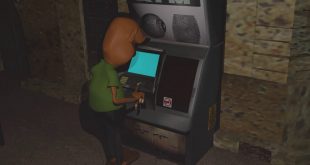