Comic Review: The Zombies that Ate the World – Book 1 HC 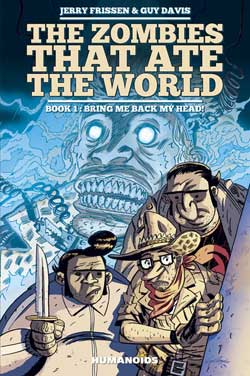 “In Los Angeles in the year 2064, the dead have risen and corpses live again, cohabiting among us…well, somewhat. As a zombie apocalypse engulfs America, we follow a group of friends on a their journey to start a little business of their own…zombie catchers!”

Artwork: 4.5 out of 5
It is not as often as one would think that a comic book has what I consider to be the perfect pairing of artist and writer, however The Zombies that Ate the World is one of those books. I have been a big fan of Guy Davis from his early days on Baker Street. So it is no surprise to me that I really love the look of this book. However the perfection in the pairing comes in when you get to see how well his style fits the storytelling. This is one specific case of being spot on from panel to panel where the artwork can tell just as many jokes as the dialogue. I absolutely loved looking at this book.

Story: 4.5 out of 5
This story is this odd mix of politics, humor and of course gore! Personally I don’t know how it works so well, because I don’t care for political type stories, but this book is seriously great. The humor in what is going on, and I will not spoil anything here (which is very hard to not do), can easily stand the test of time. Hell it should since the book takes place in 2064 right? Frissen has a great voice for this undead world, and this is not your typical zombie comic. The sad thing is that there is so much more that I would love to see get explored, but the book ended at page 120!

Dying Breath: 4.5 out of 5
How sad is it that I have a few issues of Metal Hurlant lying around and I totally forgot about this story being in them until I began to read it. I loved it back then, but this refresher totally has me on the hype train. I think most zombie comic fans would love this book, especially those of you who enjoyed Dead Eyes Open. To me it kind of played on that same idea, but then added in the funny and this book just raised its entertainment value because of that. I really want to thank Davis and Frissen for this one, it is a solid read. From the time I started reading this until the time I stopped I felt like a zombie, but I wasn’t craving brains, I was craving more The Zombies that Ate the World!

If you would like to buy or know more about The Zombies that Ate the World you can find it at www.humanoids.com/

The Zombies that Ate the World – Book 1 HC

Tags The Zombies that Ate the World