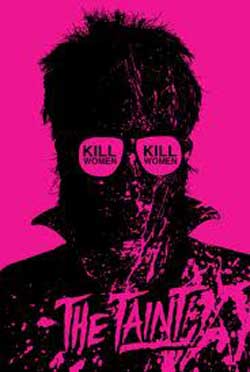 The water is tainted. The Taint poisons the minds of men. It turns them into raging misogynists: monsters who want nothing more than to crush women’s heads with rocks (or other objects). When society is transformed into a land of sadistic violence and horrible brutality, it is up to Phil O’Ginny and his hot friend, Misandra, to combat the horrible evil that is The Taint. Can they survive a world brimming with castration and endless head crushing?!

When Troma releases a new one, you can’t help but wonder what messed up imagination will reel its ugly head. I was already loving the bold, but comical title of “The Taint”……. so consider me signed on. It was halfway thru thru “The Taint” that I had a revelation. A new word needed to be created to properly categorize this concoction of violent and weird-ass proportions. And so “Campy Extreme” was born!

Check out the crazy Trailer for 2010 “The Taint” 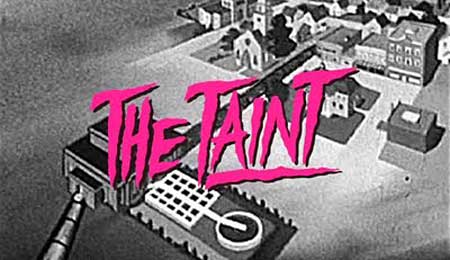 So what the “Taint”, you ask? A water pandemic (penis enhancing viral) has been unleashed into the world bringing it to its knees. We get a nice foreshadow thru the opener credits which colors all water elements green over black and white footage (Cool masking, by the way!) If you read this review “before” seeing this, know that this segment actually explains what happened to the water.

The water infects the men who drink it turning them instantly into mindless misogynist sh*t heads who seem to want to smash women’s heads in while they leaving their penises hanging out side their pants. (Ya, I know….. what was the inspiration there?)

Since I said the word, penis you should know that there are “alot” of penis shots for this not being a gay film (insert note – this could have been easily titled “The Dick”). More like huge mutant penis’s that are equipped with plenty of GWAR appropriate spray-goo. But don’t stop there as every sex shot is presented from the “inside” of a vagina. So if you didn’t get the hint, this is a film only for adult eyes (obviously). 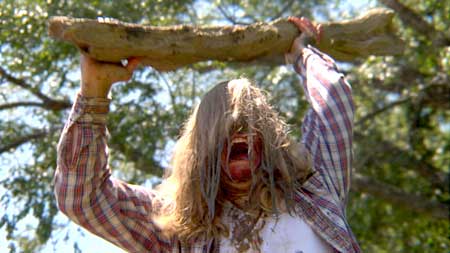 The movie runs at a rapid pace introducing alot of weirdness centered around this penile apocalypse. As with any film that’s rooted in the post world style, it comes with a helping of oddly named characters.

Drew Bolduc (also writer / director) plays the starring role of Phil O’Ginny who slightly reminded me of the pre-Toxic Avenger character. His character is perfectly suited for this puke-vomit, head smashing, sh*t dropping environment. In fact he begins the film on a nightmare moment with a scythe-wielding hillbilly who fills the screen with a nice load of fresh excrement. He too is also front-exposed laying his dripping mutant pipe outside of his Long Johns. 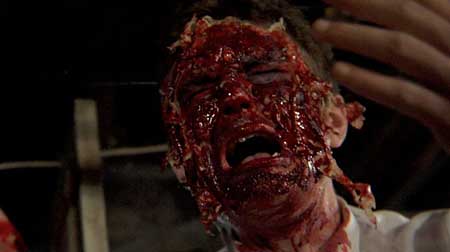 Misandra, played by Colleen Walsh, is our resident empowered tough ass who smashes in her husbands brain once he begins to turn.What viewers will really dig is the over use of head smashing props that this production seems to have no shortage of. Smash a face, blow a chunk, cut a limb, rip a face….that’s pretty close to the MO for “Taint”. Carnage never stops, quirky folks fill the screen while all the while its a laugh a minute in this totally f**ked up psycho world. 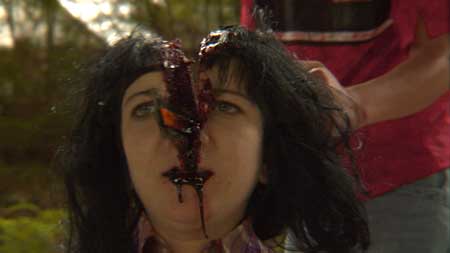 “The Taint” shoots for the filthy and nasty while incorporating gang rape humor, nazism, abortion, and penile exploitation. The horror aspect is handed out with a solid hour of split heads, brain crushing, face ripping and crotch explosions. The 3rd act of “The Taint” has so many penis jokes and d*ck FX going on that your likely to due a mental fast forward just to get the head full of Johnsons out of your mind. Did I mention this film is “not” supposed to be gay?? Well “cum” to think of it, they characters go one for about 15 minutes about getting their sticks sucked….so…ok, never mind. 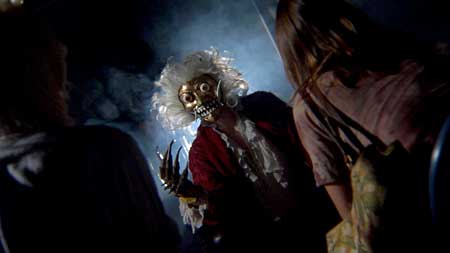 In summary, I’m not entirely exactly what I just watched. You can probably sum it up with a “film about penile enhancements gone wrong turning the world into mutant women haters”. (PS, is the director trying to tell us something??) 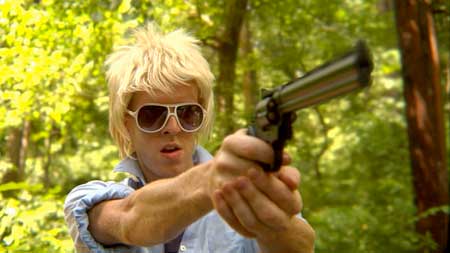 I like to refer to this as maybe even “too extreme” for the Troma label. but it is done comical, which is where the gray begins to fade away. I’m guessing this will be a cult followed film that is hidden on the back shelf reserved for those special guest gatherings. due to its comic nature, it is most likely somewhat inspired from the ranks of “Asian” films being released nowadays. Those Asians love the sick sh*t as well making every attempt to include some sort of phallic monstrosity. “The Taint” , well made, but wack-y, straddles onto the its insanity and never lets go.