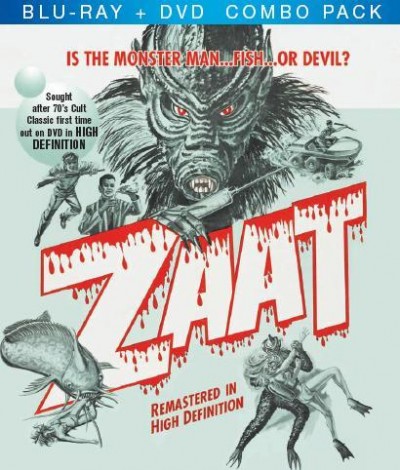 Is the monster man, fish or devil? Everyone’s dying to know (literally) in ZAAT – restored and in HD for the first time ever – available in a special DVD/Blu-ray combo pack Feb. 21 from Film Chest on the CULTRA and HD Cinema Classics labels.

Find out why ZAAT is an underground cult favorite, amassing an ever-growing legion of loyal followers over the past 40 years. See why scores of fans have refused to let this funky classic from the ’70s die in obscurity!

Armed with his mutagenic chemical compound, ZAAT, the monster is bent on revenge, determined to turn the tables on humanity by making his fishy friends the dominant species on Earth. All that stands in his way are a small town sheriff (Paul Galloway), a dedicated young biologist (Gerald Cruse) and a couple of swinging agents (Sanna Ringhaver, Dave Dickerson) from the Inter-Nations Phenomenon Investigations Team (INPIT). Also starring Archie Valliere and Nancy Lien.

In ZAAT (also known as The Blood Waters of Dr. Z), an obsessed scientist, Dr. Kurt Leopold (Marshall Grauer) – who has been scorned by his peers – is convinced he can transform humans into fish. In his isolated backwoods laboratory, he proves his hypothesis by turning himself into a horrible, vengeful creature (played by Wade Popwell) that is part man, part walking catfish!

It’s a southern fried fight to the finish (Florida style!) with the ecological state of the entire planet at stake!

Produced and directed by Don Barton and written by Ron Kivett and Lee Larew.

Zaat is presented in widescreen with an aspect ratio of 16×9 and Standard Dolby Audio. Includes Spanish subtitles. 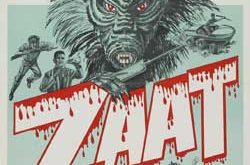