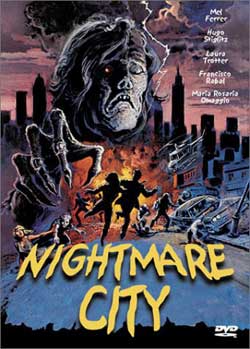 An airplane exposed to radiation lands, and blood drinking zombies emerge armed with knives, guns and teeth! They go on a rampage slicing, dicing, and biting their way across the Italian countryside.

From Italian director Umberto Lenzi comes one unique zombie movie. Maybe super zombies is a more accurate term because I’ve never seen zombies like this before. They are a particularly nasty kind that not only move fast, but are extremely intelligent and organized in their attacks. Now I do have to admit that as far as the slow versus fast zombie debate goes I much prefer the slow. To me it is more terrifying that your death not only be slow and gory and painful, but I can’t imagine a slow zombie more or less gumming on me while he’s trying to eat one of my limbs. Yech!

That said, I did enjoy not only the movie but watching these zombies in action. I mean, when was the last time you saw zombies carry and use the following: clubs, crowbars, knives, guns and all other kinds of assorted weapons? It’s crazy. There are many ways to die in this movie and let’s just say that a lot of those possibilities get used. It definitely makes for one entertaining movie. 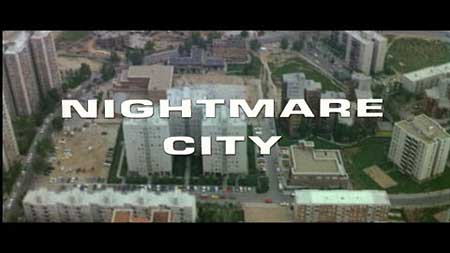 And it doesn’t take very long for the action to get going. Our hero, Dean Miller (played by Hugo Stiglitz) is a journalist that is sent to get an interview from a well respected professor at the airport. Recently there was a terrible accident that resulted in a radioactive spill but seriously, what could possibly go wrong in such a scenario?

The first clue is the professor’s plane that has to make an emergency landing on one of the runways. Next is the fact that there doesn’t seem to be anyone piloting the plane. That’s weird. Weirder still is the fact that there is no response from anyone inside, even when the military arrives and demands that someone better step out of that plane in thirty seconds or else. 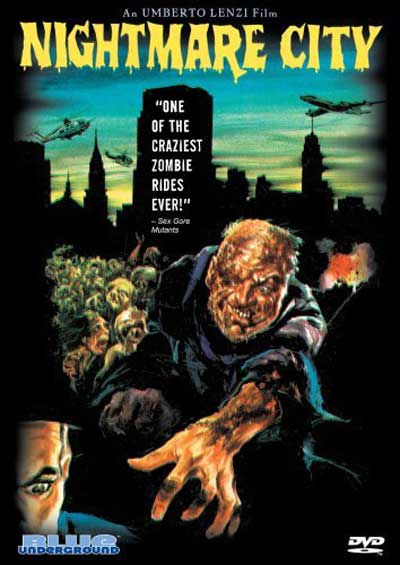 That seems to do the trick as the door suddenly opens. Out steps the professor, looking mildly confused and moving slow and deliberate. What happens next is one of the best scenes in the film. The professor promptly attacks the first human he comes across while a lot more zombies pour out of the plane and quickly decimate pretty much everyone there.

Dean Miller barely makes it out alive and quickly heads for his station so he can get the news out. Too bad the military steps in and cuts the newscast short. They don’t want a widespread panic and feel it is in the best interest of the people to keep the incident covered up. Can you say bad idea?

Nightmare City was an extremely fun movie with very fast pacing. The action and killing take up most of the movie. Sure you have your quiet moments where we get to know the characters more but they don’t last long and for this film that is perfect. The zombies are the stars here as they rampage and mutilate their way across the Italian city and countryside.

Umberto Lenzi does a terrific job of directing and throwing you right into the middle of the action. The blood is plentiful and in the tradition of Italian horror very red and stylistic. Special effects are above par and since we have the use of guns in the film we are treated to some gory head shots. After all it is the only proper way to kill these super zombies.

One really fun scene involves a group of people that are trapped in an elevator. One of the ladies is starting to have a panic attack as the others start to pound on the door for help. If they only knew who or what was going to come to their rescue.

If you are a fan of zombie movies than I would have to say check this one out. Not scary but filled with lots of action and given the unique nature of the zombies very entertaining.